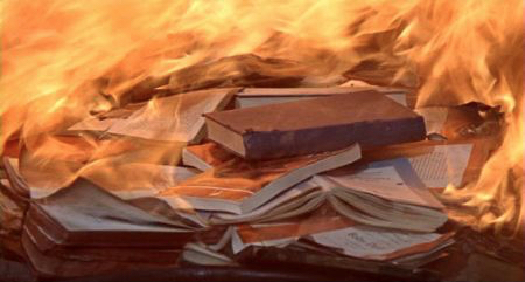 “There is more than one way to burn a book. And the world is full of people running about with lit matches.” • Ray Bradbury’s opening words to his coda in the 1979 edition of Fahrenheit 451

Good friend and fellow columnist Martha Thomases’ latest column made me remember an incident from my childhood, back when I was in grammar school at P.S. 29 on Staten Island, NY. But more on that in a bit.

The autoignition point of paper – autoignition being that temperature at which a substance will spontaneously burst into flames – is anywhere from 424 to 475º F (218 to 246º C), dependent on the type of paper, i.e., thickness, density, composition, and atmospheric conditions. It is also the source of the title of Ray Bradbury’s 1953 dystopian masterpiece, Fahrenheit 451, which takes place in a future American society in which books are not just banned, but outlawed. Those who are found to be harboring not only have their books taken and burned, but their homes, too, are set aflame by “firemen” whose job is to search out and destroy any type of literature.

In this bleak Tomorrowland, America is a land in which E Pluribus Unum has been replaced with Ask Me No Questions, I’ll Tell You No Lies; those who live in this world are not individuals, but automatons, walking through life, but not living it, with no thoughts of their own.

What is both ironically amusing and extremely aggravating to me is that Fahrenheit itself has been subject to expurgation, censoring and banning. That’s right, a novel about the dangerous suppression of individuality was itself earmarked for the bonfire. Yes, I know, it is the height of absurdity, but it is true.

In 1967, at the height of the ‘60s social revolution, its publisher – Ballantine Books – released an edition for its high school books program which censored the words “hell,” “abortion,” and “damn,” altered at least 75 paragraphs, and changed character situations that were felt to be detrimental to the fragile minds of teenagers – a drunk man became a sick man, the cleaning of a belly button became cleaning ears.

Both censored and uncensored versions were available until 1973, when Ballantine decided that the public should read only the expurgated version. This continued until 1979, when Bradbury found out about it. Understandably, he went berserk:

“Do not insult me with the beheadings, finger-choppings or the lung-deflations you plan for my works. I need my head to shake or nod, my hand to wave or make into a fist, my lungs to shout or whisper with. I will not go gently onto a shelf, degutted, to become a non-book.”

Lucky for Bradbury, noted and brilliant science fiction editor Judy-Lynn del Rey had recently been brought in to revitalize their science fiction line, and stepped in here as well. So the novel, in all its dystopian glory, has been back on the bookshelves, available to all discerning and thinking readers for 36 years. And no one has complained.

1987: Bay County School Board, Panama City, Florida. Superintendent Leonard Hall institutes a three-tier classification system. Fahrenheit 451 was assigned “third-tier” status, meaning that it was to be removed from the classroom for “a lot of vulgarity.”

1992: Venado Middle School, Irvine, California. Students were given Fahrenheit 451 to read. All the “bad” words were blacked out.

2006: Independent School District, Conroe, Montgomery County, Texas. A tenth grade student was assigned to read Fahrenheit 451 as part of Banned Books Week. She stopped reading it after only a few pages because of the “bad” words and the scene win which a Bible is burned. Her parents demanded to that the novel be banned – this during Banned Books Week, get it? – because they said it was violent, portrayed Christians as yahoos, and insulted firemen.

All these attempts to censor, purge, and ban Bradbury’s tour de force ultimately failed. But stay tuned. The other major theme of Fahrenheit 451 is the manipulation of society through mass media and technology.

On the other hand, don’t stay tuned.

Although I didn’t consider myself to be so, apparently I was one of those super-bright, obnoxious kids who love to read and are reading waaaaaaay above their grade level that annoy the shit out of Marians the Librarians – well, at least we did in the olden days.

So, like I was saying, I was seven years old and attending P.S. 29 on Staten Island, New York. So one day I go to the school library to search the stacks for something to read. I discover The Black Stallion by Walter Farley. Being head-over-heels with anything that had to do with Equs caballus – or is that Equs caballi? – I wanted it. Only it was on the highest bookshelf. I took a chair from one of the tables, dragged it over, got up on the chair, stood on tiptoe, and clutched the book in my hot, greedy fingers. I got off the chair and walked over to the checkout desk.

Marian the Librarian wouldn’t let me have it.

I cried all the way home. I even cried when I got into my house.

My mom wanted to know what was wrong.

The next day my mom walked me to school. Only she didn’t drop me off in the schoolyard, she walked into the school with me and right to Marian the Librarian’s office.

“I understand you wouldn’t let my daughter read the book she wanted,” she said.

“Well, you must understand, that book is for eighth-graders,” Marian said.

“Mindy is not in the eighth grade.”

“My daughter wants that book.”

“Don’t you ever tell my daughter she can’t read something. Ever.”

I was sent to class at that moment, so the rest of this is hearsay, but the way it’s been told at family dinners and gatherings over the years it seems that once I was out of the library my mother let Marian the Librarian have it. Stuff about Joe McCarthy and Nazis and book burnings and threats to go to court if she had to and a few choice “bad” words thrown in for good measure. Granted, the story has most likely been embellished since that day when Laura Newell, R.N. defended the Bill of Rights against one harried school librarian, but you get the idea – and of course I got the book…and any other book I wanted to read that was found in the library of P.S. 29 on Staten Island, New York.

My mother blew out a lit match that day.

Judy Blume is the author of the classic young adult novels Are You There God? It’s Me, Margaret, Tales Of A Fourth Grade Nothing, Freckleface, It’s Not The End Of The World, Forever, and so many other. Her first adult novel, Wifey, was published in 1978. Ms. Blume’s latest book is the adult novel In The Unlikely Event.