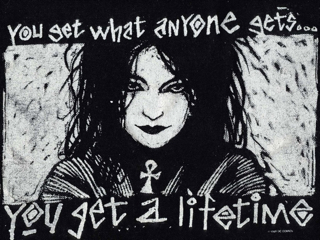 Despite never having met David Bowie, he’d been a part of my life for a while with his music, movies, and other works. And a celebrity of his status is hard to not be reminded of, regardless of if you’d like to avoid him or not. From his music being in a many films, to just hearing his songs in played on the radio, bars, and grocery stores, Bowie is just so entrenched in our pop culture that he’ll live on for the rest of my life, even though he physically hasn’t.

Comic book story lives and deaths are a little different. I probably didn’t need to tell you that, but it sounded like a good segue so here we are. Character deaths in mainstream comics are becoming more and more a staple of the medium. The increase in character deaths is leading to an increase in characters coming back to life. Oddly enough, characters who would sell a lot of books with their deaths get killed off (see Superman, Batman, Phoenix, Wolverine and more!) or characters that no one seems to know what to do with (see Coagula, Kraven The Hunter, and more!). Just like real life!

When it comes to characters coming back to life, it’s a bit harder to suspend your disbelief. At least for me. And I’m not saying that to mean in these worlds with alien worlds, alternate dimensions and time travel (just to name a few) that someone coming back from life is where I draw the line. It’s more just sad how these fictional characters we know and love seem to put more effort into bringing back their pals that sell books than bringing back all of their good friends, relatives, and innocent bystanders they’ve watched die over the years. Always comes down to the bottom line with these superheroes. It’s a damn shame. I know I’ve plugged X-Statix before, but if you haven’t read it the book does touch on that point.

Anyway, the big two used to at least try to take a break between ending lives in their comics and starting up lives again. Currently Marvel is advertising that they have a character coming back to life and a major character death coming up soon. The line between life and death in mainstream comics has become so blurred, with brief lives and briefer deaths. All as the ultimate gimmick to keep you wanting more.

These two instances do have similarities. Yes, they’re both controversies in the various Green Lantern comics, but that’s not what I was getting at. It’s that both instances involve killing off characters that are not straight cis white guys. In one they’re killing off a woman, and in the other they’re killing off a black man. In both, the idea was to kill off a character that would have motivated at least one straight cis white man to take action and do the right thing. In one, Kyle Raynor was pushed to stop Major Force at all cost, and in the other different Green Lanterns would have been motivated to solve the mystery of who killed John Stewart. The latter of which caused such an uproar that DC cancelled its plans to kill off John Stewart.

I’m sure we can all think of a lot of potential examples in our heads right now. What if Marvel killed off Steve Rogers (again)? Sure, that’s making room for Sam Wilson to really assert himself as Captain America even further, but in a way doesn’t it have the implication that Steve Rogers is more important? What if Marvel killed off Sam Wilson? Wouldn’t that lead to Steve Rogers somehow probably taking the role of Captain America back, taking a step back in diversity as the cast of characters gets just a little more white and a little less black? It’s something to think about. At least I’m thinking about it.

If they would just come back anyway, then that’s not great for diversity either. In DC Comics 52 series showcasing the aftermath of Infinite Crisis, we got characters like Batwoman stepping up, and The Question passing the torch from Vic Sage to Renee Montoya, as Batman and Superman and some others are out of the picture. It was a flirtation with diversity that ended with our beloved white heroes Superman and Batman coming back from obscurity as Batwoman and The Question fell back a bit. The Question has even went back to being Vic Sage after The New 52 reboot. Go figure.

DC has other examples of this, like bringing back Hal Jordan as a Green Lantern instead of maybe delving more into John Stewart, and more. Over at Marvel, they killed off Wolverine, and now X-23 has taken the reigns in her own book All New Wolverine. Speculation of Wolverine coming back (Not Old Man Logan, who is already back, but the real deal Wolverine) in 2016 has been high. If he comes back, isn’t that a step backwards for diversity? Even if they still try to push X-23 as Wolverine, won’t it eventually just move back to Logan? They must know that over at Marvel, and that makes it a little troubling to think that they would be willing to undermine their own progress. Maybe they won’t though, but it’s something that’s more than possible, it’s likely.

Often character deaths in mainstream comics lead to brief lives of those that take their place. The Death of Superman brought us Steel, but since Superman’s return he’s often been used very sparingly and rarely with much thought or creativity outside of his original creative team. These are all just some examples of life and death in comics, and how they can work against diversity or hold diversity back. If Marvel and DC are really going to take diversity seriously, they may need to let the dead rest in peace.

I understand it’s complicated, I know that no one wants to throw away an opportunity to make a few bucks, and work for hire contracts keep many creators from wanting to invest their hearts and souls into characters they don’t own. However, something needs to change. Some of the current ideas in mainstream comics need to be allowed to die, and new ones need to be born and thrive.