The first issue/appearance/episode of anything is the best, right?  It’s a law, someone surely has said, that sequels and/or continuations cannot stand up to the first time whatever great awesome concept it is we’re encountering again made itself known.  It’s just not possible, right? 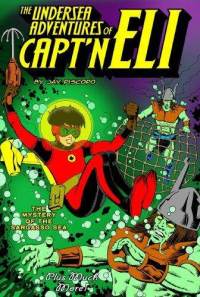 Well, maybe so…but that was all before Jay Piscopo released the second volume of THE UNDERSEA ADVENTURES OF CAPT’N ELI!

CAPT’N ELI is a story centered around a boy orphaned from one set of parents and found in the sea by a second set of parents and reared and raised with great values and a penchant for finding danger and adventure.  Along the way he picked up a dog he taught to tie knots, a parrot able to speak in complete sentences in around 70 languages, a mentor who was once a golden age hero turned villain, but is he?, a team of sea based researchers, some time travel, and an encounter with an undersea world made up of warring factions of seadwellers…oh…and dinosaurs….and robots, big and little, and…and…yeah, there’s lots more…

Just as in the previous volume, Jay Piscopo deftly captures a feel for old cartoons and comic books while at the same time crafting the images and the story in such a way that any modern reader would thoroughly enjoy the romp they were being taken on.    The art is fantastic and evocative of great Saturday morning adventures.  You can see the influence of Alex Toth especially throughout this volume, which continues THE MYSTERY OF THE SARGASSO SEA’ adventure started in the first volume.   I found myself seeing hints of all sorts of cartoon heroes I grew up with hidden..and sometimes not so hidden…in the faces of Eli and those around him.

The pacing of this tale never lets up, but you don’t get lost in it.  The edutainment factor I found in the first volume is handled just as well in this story, teaching enough to move to the story along as buildings crumble and ships explode.  Something that is easier to say in a second volume than with a first can be said here as well.  The characters, good, bad, and otherwise, are likable and make the reader want to learn more about them, to see what happens to them.  And Jay gives hints and origins and background in a teasing sort of ‘here’s just enough for you to come back’ way, but it works…it makes the reader want to know more, yet still leaves the reader feeling like they know enough to like (or dislike) the character.

The only drawback to this volume may be that TOO much happens.  Pacing is excellent, but the inclusion of so many characters and events might boggle a reader not prepared for the sensory overload that this fantastically told tale is.

FIVE OUT FIVE TIPS OF THE HAT-No doubt.  This middle chapter of this great adventure had everything the first part had and more.   If this were a movie, I’d be in line for VOLUME THREE now. 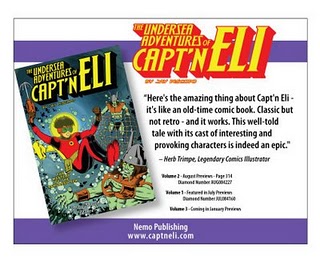