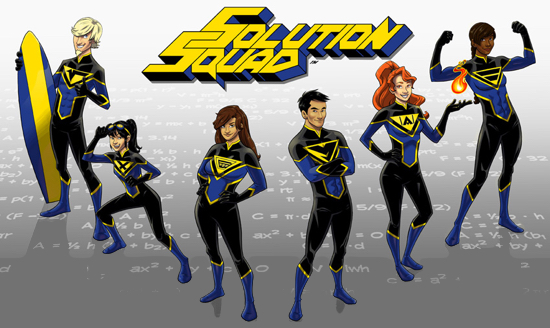 Of the many treasures I’ve collected since making comics, the friendships gained are the most valuable. One such friendship, with writer and artist Jim McClain, stands above and beyond nearly any other – save perhaps only for my frenemy Dan Dougherty (a.k.a. “Beardo”). For those who aren’t in the know, Jim represents literally the best kind person: a selfless, intelligent, driven man whose comic book career comes in between his time as a school teacher, husband, and father. This week, I’m proud to hang up my snark and snarl. Instead, I get to put on my hat of friendship and sharing. Solution Squad by Jim McClain is a gem of a series you’d be smart to jump on. 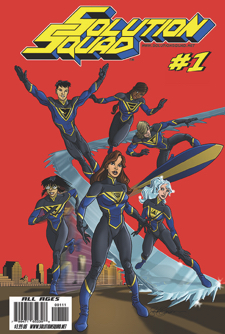 Are you back? Good.

Ask a younger Marc – pre-being-a-dad – how often he might stop at a table promoting a comic book series with math in it, and you’d be met with a litany of chortles and guffaws. For those familiar enough with my Unshaven history, will no doubt recall our first book was edutainment. Our experience selling it was akin to madness. A lot of polite grins. A few high fives. Mike Gold’s approval. But not much else. Suffice it to say, whenever I hear math, I’m quick to denote that I went to art school. That’s usually worth a laugh.

The first-time Jim McClain described his book to me, my snark subsided. Because Jim – an imposing man if you didn’t know him otherwise – exudes the kind of passion I didn’t find myself having until we started selling The Samurnauts. More than just proof-of-concept, Solution Squad is Jim’s professional id made real. The excitement and joy he has in making it bounces off the page.

In 2014, Unshaven Comics and Jim sat close-by in the artist alley at Indy Pop Con in (of course) Indianapolis. Jim politely needed a break from his table to moderate his own panel (as I recall) and asked one of we Unshaven Lads to staff it in his absence. Not wanting to ruin our own chance at sales, I left Kyle and Matt to our table and took up shop at Jim’s li’l corner. I recall the floor being sparse at the time. Guiltily uneducated in his wares, I snuck his first issue into my sweaty palms… and devoured it fully.

Solution Squad is a silver-aged superhero yarn through and through. The dialogue is clear and concise. The illustrations are colorful. The action starts up nearly instantly, and carries scene to scene. But I belie the bigger point; the book slyly teaches math concepts that I – a college graduate who in spite of his jests is actually not half dumb – actually had never learned before. When I put that first issue down, I remember feverishly the first couple who walked past Jim’s table (now manned by moi). I shot out of the chair and waved them down. I hit them with the trademark Unshaven Charm (“Can I tell you about my, err, this…. comic book?”). A polite and sheepish “sure?” later, and I started falling over myself to pitch them. Here’s a brief but accurate paraphrasing of my rambling:

(Please read this at double-speed for effect) “OK, this is Jim McClain’s Solution Squad. I’m not Jim. I’m his friend. He’s teaching, err, talking at a panel right now. OK! Anyways… This is Solution Squad. It’s a team action-adventure where all of the heroes have math-based super powers! (They don’t.) And this book actually teaches you math, but it’s deep in between just a great adventure! Like X-Men or something similar. And I have to tell you folks… like… I am a college graduate… and I learned math from this comic not ten seconds ago!”

I likely didn’t even breathe during the exchange. The couple, eyes glazed, declined to take one home. I was unfazed. I’d wind up pitching like an insane carnie for the next quarter hour until I spotted a middle schooler and her parents coming up the aisle. I’d refined the pitch down to the core concepts, put the book in her hand, and watched her light up. Money was exchanged, and no sooner than she was skipping down the aisle, Jim had returned.

Solution Squad read to me as a book fueled by passion, penned with wit and charm, and delivered the educational backbone without ever feeling like a tacked-on gimmick. Much like my own book, Jim writes material that doesn’t talk down to a single reader. Instead, it tells a solid story, then just happens to tie in middle-school math concepts that carry weight to people of all ages. That it does all of this while remaining an action comic at the forefront is a tightrope walk backwards on a unicycle. Jim confidently rides that unicycle backwards while juggling chainsaws.

Ever since that convention, I’ve held my friendship with Jim in reverence. The journey Jim took to making comics is a harrowing tale I beg you to ask him about when you see him. He is, as we Jews might say, a mensch of the highest order. Over the years he and I have swapped stories, toasted to our successes, and commiserated in our failures. In him, I see an older brother… never far away from razzing me, but not without a knowing smirk. His successes have become my successes – in that seeing Solution Squad grow and become a hard-cover graphic novel has only fueled my continued drive to finish Samurnauts in hopes of being even half as good (and completely devoid of actual learning, I suppose, natch).

Consider my gauntlet thrown to your feet. The Solution Squad need your help. Back the Kickstarter today, and tell Jim I sent you. Money where my mouth is: do it, and I’ll send you a digital copy of Samurnauts: Genesis.

I’d say that adds up to something special. Wouldn’t you? Defendit Numerus!

So Unshaven Comics finds itself once again in the loving bosom of the Javits Center and the New York Comic Con. As I reminded you last week, Unshaven split its booth space with ComicMix in 2013. This year we split with the lovely Jim McClain of the Solution Squad (and subsequently Reading With Pictures). As of this writing ­– literally being written hours before you are likely seeing it posted – Unshaven has had some significant ups, and some hilarious downs. Let’s list them until I’ve wasted enough of your time.

It’s always good to see a rise in sales. Given our booth placement (ahem, Marvel-Adjacent) we figured we’d either be in the money or left drowned by lines, crowds, and cheering… and find ourselves in Bone City. Luckily for us, Marvel erected a large wall across from our table. This houses their crowds well enough, and allows us ­­– with a little strain ­– to be heard. And when we have someone’s ear, according to my data, we’re 40% likely to get that sale. We love those odds. And suffice to say since we learned to upsell our typical single comic to a four-book pack (which includes some freebie swag we’re willing to lose profit on to bolster a larger book sale), we’re seeing far more than the 10% growth in books moved that we seek as a baseline for a return con visit.

Data is Unshaven Comics’ friend. It allows us to transcend anecdotal feelings, and instead supply ourselves with factual evidence when it comes to figuring out if a convention is doing us well or kicking our keister. With that being said, I am sad to report New Yorkers aren’t the nicest people we’ve dealt with. In the same amount of time spent on the show floor, Unshaven Comics is pitching about 20% less than we did at C2E2, or Wizard World Chicago. NYCC boasts traffic on the floor greater than both Chicago shows combined. The simple fact is that people are on the move at this convention. More movement means less fine folks to pitch to.

As I mentioned above, seeing such a high closing rate is compounded by the fact that 90% of our sales are to new faces. New faces to me, proves several fun notions. It stands to argue that seeing new folks continually buy our li’l rags proves our product (and likely our passion and pitch) are worth their mettle. It also stands to consider then that the audience for sequential fiction isn’t on the outs like some would have you believe. While yes, I’m sure DC and Marvel and the like aren’t thriving on the racks like they used to, with the continuing growth of the convention scene, we’re seeing a real change to the shape of the market at large. While fans may not flock to the local comic shop every Wednesday as we’d all hope… New York Comic Con continues to instill in me the idea that maybe the fans are just more apt to explore and sample when they can meet creators face to face.

Down: Our Old Friends! Buses! The Price of Tater Tots!

OK, call this my little rib and stick at those we know and love (and New York at large). We’re two days into the convention, and no one save for Media Goddess herself, Martha Thomas, has made pains to say hello. While our editor Mike Gold dined with Debutantes and Dames at the Puck Building Party, and other East Coast Corroborators did whatever it is they do, they’ve not even waved a “Hi, and go ­hug­ yerself!” to we bearded lads. And on top of it, tonight I paid two dollars to upgrade my fries to tater tots, only to be given five of them as a serving. Sorry New York, Chicago understands portion size. And before some crazy Yankees fans point me to Manny’s or what-have-you, Mid Town and sore asses aren’t conducive to jaunts elsewhere. But I digress.

Ups, Down, and All Arounds:

Ultimately, New York Comic Con thus far has been everything we’d hoped it would be. Our sales are tracking on point as desired. Matt and I have enjoyed a few commissions. Our tablemate Jim is learning some valuable lessons (and apparently eating a hell of a lot better than us). And our hosts, the lovely Glenn and Brandy Hauman have been nothing short of perfect inn-keepers. We remain hopeful with two days left on the show floor, the best is yet to come.

Once again, Unshaven Comics would like to remind you they are at booth 1361, and could sure use some extra business to make life dandy. Stop by and mention this article? And Marc will personally thank you, and toss in some free swag with your book purchase.