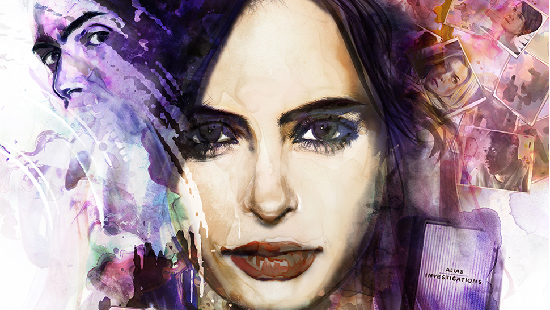 Well, Jessica Jones, you have my interest. So: I haven’t seen all thirteen episodes of Marvel and Netflix’s Jessica Jones yet (hey, la Casa de Emily gets busy around the holidays), but I did get in a good four episodes with my Marvel watch party buddies, and all of us were left wanting to see more.

I was excited about Jessica Jones before it came out and so far, I haven’t been disappointed. The show is in line with Daredevil in feel, but possibly even grittier in atmosphere; and by that I don’t mean harsher – I mean more real. Jones is a relatable “superhero,” primarily because she’s not a superhero. She’s a regular person in many ways – in the sense that she’s not perfect, she doesn’t have her life together, and she’s not stellar at picking the wisest way to handle a crisis.

She’s also rude, abrasive, and somewhat paranoid – but given the world she lives in, instead of putting me off that actually makes me like her, because it’s probably how a lot of us would react if we were dealing with the guilt, trauma, and danger she’s experienced. And I mean, yes – she also happens to have superpowers. But they are not the biggest focus of the current storyline, nor are they a solution for her problems. I like that, because I like seeing the less-than-perfect side of a “gift” like superpowers. And, because the sheer normalcy of her issues highlights the challenges raised by her special abilities.

I also really enjoyed seeing those abilities slowly being displayed. With Jones, you don’t get a lot of flashy, showy superhero stuff – what you get is someone who’s trying to do her job like a regular person, but resorts to lifting a car’s back wheels off the ground just as much as is needed to stop the criminal she’s trying to serve a subpoena on from getting away. You get someone who, rather than leaping tall buildings in a single bound, jumps high enough to awkwardly shimmy onto her best friend’s balcony when she needs to borrow some money. That’s not to say that her powers aren’t impressive (and I am sure I will see more as I continue the season); but that the way they are introduced is the more interesting for being revealed in very utilitarian situations.

And then, of course, sometimes for being abused – as when a couple who are enraged by the destruction that took place in New York during the Avengers movie tries to take out their anger on her as one of the superpowered bunch. Instead, they end up being treated to a rage-tantrum in which Jones tears up their house while, quite rightly, pointing out that she’s also dealt with unfair loss and pain, but isn’t blaming random people for her suffering. (And I also liked the allusion to The Avengers and the consequences of the destruction in the city – too frequently superhero stories don’t really address the collateral damage and trauma to civilians caused by Spidey or Superman or the Avengers or whoever pursuing a bad guy across a city. I don’t like the awkward way Jones refers to other superheroes without naming them, and I’m not sure if that’s because of a rights issue or weird scripting – but that’s a small complaint).

It was also a treat seeing Luke Cage’s abilities being brought to light. The introduction of his fighting style was pretty hilarious – the way he rolled his eyes at the barroom brawlers trying to pick a fight, and then knocked one out with the most casual backhand I’ve ever seen. And it was perfect for the style of this show and the aforementioned utilitarian aspects of superpowers being highlighted. The introduction of Cage generally is something I’m enjoying; including the slow build of his backstory and character as he gets to know Jones and more about her past impact on his life is revealed.

That’s another thing the show is doing well – the slow build. I realize that a lot of people may want to see a pilot that is chock-full of information and really grabs them in one sitting; but since this show has the opportunity (as did Daredevil) to grab an audience over a series of episodes that are all immediately available to watch, I don’t mind that it’s taking advantage of that still rather new media “format” to adopt a somewhat decompressed style of storytelling. It makes some aspects of the story, like the introduction of new characters, such as Patsy/Trish Walker, feel much more natural and real. While the initial focus of the show is Jones, and we don’t, at first, even know exactly what her past relationship with Walker is, the development of that and of Trish’s personality, from a perfectly put-together radio host to a more nuanced person who deals with a troubled childhood and a current intense fear of danger after what happened to Jones before the events of the show, is enjoyable because it’s not particularly hurried. There’s no info dump, and that’s a relief.

The decompressed style also allows for incorporation of characters like Will Simpson and Malcolm Ducasse without the feeling that they’re being thrust in our faces, and with a greater chance that we won’t see plot points involving them way ahead of time. It allows us to feel with Jessica as she, e.g., discovers that one of the few people she regularly interacts with and has generally tried to help and sort of look after is actually spying on her and betraying her movements to her enemy. In other words, it makes them less predictable bits in a Jessica Jones-centric story, and more like parts of a fully imagined world she happens to move through and interact with without knowing how any of her choices are going to pan out.

That world has a great noir-ish feel; it’s definitely not today’s New York, but is older in style and more homey while at the same time feeling more dangerous. (Although I did notice the reference to the 5th Avenue – Bryant Park entrance to the 7 line and wonder if that little homage to the newest way to handily access the Javits Center for New York Comic Con was intentional.) Yes, there are big fancy glass-and-metal skyscrapers housing, e.g., high-powered attorneys who pay Jessica to deal with difficult issues; but there are also neighborhood bars that have clearly been around forever and are definitely not part of some big chain or conglomerate, and buildings that may not be up to code but definitely have a lot of “character.”

Jones’ New York is both a setting I feel like I’m experiencing through her eyes, and a place that fits well with the world as seen through the lens of Daredevil; which bodes well for an eventual melding of the two. I like the way it does feel just slightly different from Murdock’s world; and hope that when Cage gets his own show, and Iron Fist his, we also get slightly shifted perspectives of Hell’s Kitchen through their personal experiences and views.

Speaking of high-powered attorneys, I’m enjoying Carrie-Anne Moss’s role as Jeri Hogarth, a hard-nosed, cynical lawyer who is also in the midst of an acrimonious divorce from her wife while engaged in that most clichéd of affairs, a romance with her younger, prettier secretary Pam. I’m also enjoying the way they’re exploring that side-plot – through sad little scenes like Jeri taking secretary Pam to lunch and running into wife Wendy Ross-Hogarth, who reveals to Pam that they are about to enter the restaurant where Jeri proposed to Wendy. The whole scene is awkward and painful for everybody in a way that is very realistic, and I appreciate as well that it shows this interaction with a same-sex couple, highlighting that the ugly issues involved in divorce span across all pairings in relationships.

In the same vein I appreciate that all of the women of this show are allowed to be unlikable. They’re allowed to be harsh, and imperfect, and paranoid, and weird, and humorous, and passionate, and ruthless, and loving, and conflicted, and scared, and tough, and smart, and successful, and fatalistic, and stupid, and angry, and cruel, and destroyed, and determined – and all in the mixed-together, messy way that real people are. There are no female characters in this show who fall into a stereotypical category; and the same goes for their relationships with the other characters.

And as we’re talking about relationships, one of the most important ones is Jones’ relationship with the villain of the story, Kilgrave, and it’s as fascinatingly disturbing as he is. We get to see glimpses of her past with Kilgrave as the plot moves along – and it’s creepy and sad to see the Kilgrave of flashbacks playing with her like a living doll subject only to his whims, dressed up for a night on the town, or told to casually dispatch an innocent woman using her superpowers. It’s sad as well to see her current suffering from the PTSD left over from what Kilgrave made her do. It heads up the point that no matter how strong she or any hero is, they can still be vulnerable, and their powers are not a magic cure-all.

It also addresses how slow to heal psychological wounds can be. As we see more of Kilgrave in the present we see how truly sadistic his use of his powers really is, Krysten Ritter realize that the magnitude of his past abuse of Jessica could be anything. When he, for example, doesn’t even allow people to retain the basic dignity of using a restroom to go to the bathroom when he’s bending them to his will, it shows his inherent cruelty and his all-encompassing disregard for anyone but himself. And when we realize how much of his will is focused on exacting revenge on Jones, who managed to defy him and also left him for dead, her paranoia and barely controlled reactions start to make a whole lot of sense.

I also appreciate that the show doesn’t try to present any of this as acceptable – it’s wrong, and twisted, and not even the littlest bit okay. And it results in a view of the villain that’s intriguing because it shows us just how petty and pathetic he is, despite how powerful he also is. The contrast between what he can do and what he uses his ability to do shows how truly despicably small he is; and reflects perfectly the truth of an abuser’s personality. It’s a nuance that a lot of shows don’t manage to get across; but this show really sticks the landing.

Yes, indeed there are many things this show is doing well; and I can’t wait to see what else is in store for me as I finish the season. So off I go to see what other crazy things are about to go down in Jessica Jones’s New York; and until next time, Servo Lectio.