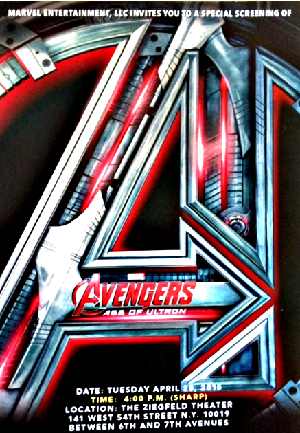 Lucky for me, it was the “friends and family” screening of Avengers: Age of Ulton.

First of all, I was lucky because I got to go. I was lucky to hear Joe Quesada introduce the film, not only because he was amusing but he was gracious enough to thank the event planners before he thanked the Hollywood bosses. Trust me, as someone who has worked events for more than 20 years, it’s unusual when someone says “Thank you.” He also thanked all the people who worked on the books, the source material for the movies.

And I was lucky because of the audience. The people in Manhattan’s Ziegfeld Theater on Tuesday were Marvel (and Disney) employees, freelancers, and their plus-ones. It was the kind of audience that cheered the coming attractions (Ant-Man), of course. They cheered the created-by credits. They cheered Stan Lee. From their cheers, I could tell that I picked up all the Easter eggs, thrown in for the fans in the audience by the fans who made the film.

The film. How was it? There may be SPOILERS, depending on how you define the term, although I will try to avoid the big ones.

If you haven’t seen the first Avengers movie, you might have some problems jumping into the plot of this one. If you haven’t seen any of the Iron Man, Thor or Captain America movies, you may miss a few key character developments. And if you didn’t watch Marvel’s Agents of S.H.I.E.L.D. this week, you missed the set-up.

The plot, as you might surmise from the title, concerns the creation of Ultron, using the Infinity Stone from Loki’s staff (from the first Avengers movie) and Tony Stark’s tech. Ultron runs amok, and the rest of the movie involves our heroes trying to stop him/it. As they do, they first fight and then team-up with Quicksilver and the Scarlet Witch. In the process, many, many places suffer severe damage, including Wakanda.

(During the fight in Wakanda, our heroes must deal with the local police and, later, the military. In both cases, the first faces we see in uniform are white. Given current events, this took me out of the narrative for a beat.)

If I approach this review with my English class lessons, it is difficult to describe. There is no single protagonist, no character who has a transformative story arc. My future husband, Robert Downey, Jr., and the other heroes with their own film franchises (i.e. Captain America and Thor) do very little other than fight and trade quips, once they get past the exposition parts of the dialogue.

Instead, the revealing character moments belong to the Hulk, to Hawkeye, and the Black Widow. If anything is going to rile up the fanboys, it is the changes the movie makes to Hawkeye. Since I haven’t followed the character in the comics (although I’ve enjoyed a bunch of the new version), I wasn’t offended. I think it works for the character in the movie. It explains a lot about his relationship with Black Widow.

Here’s my favorite thing about the version of the Black Widow we get in these movies, a part of her character I credit to Joss Whedon (based on Buffy and Firefly): she not only holds her own with the male characters, but she has relationships with them that are collegial, not romantic. She is, first and foremost, a friend and an ally. While there seems to be some suggestion that she and Bruce Banner might click, even that possibility comes from the trust and respect they have for each other as teammates, not hot bodies.

Ultimately, The Avengers: Age of Ultron suffers from the fate of most middle films in a trilogy. There can’t be a real resolution because then there would be no need for the third movie. Still, there are a lot of pretty people doing a lot of pretty spectacular things, with plenty of explosions and lots and lots of fight scenes in exotic scenery.

Go. You’ll have a good time. Just don’t try to write an English theme about it.