Christopher Nolan’s third Batman film will be called “The Dark Knight Rises” and although we still don’t know who will be the villain of the 2012 film, he did eliminate one of the big contenders: “It won’t be the Riddler,” Nolan said in an exclusive interview with Hero Complex.

Most interesting is that Warner Bros.
agreed with Nolan that the film should not be in 3-D, instead using high-definition approaches and IMAX cameras. One could argue that he’s leaving money on the table by not embracing 3-D and the higher ticket prices, but I suspect he’ll still do fine dominating IMAX screens for a good long while, which also sell seats at a premium price. 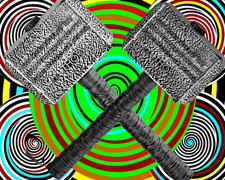 The march of the 3-D movies continues trampling the
Multiplexes. Movies are being retrofitted left and right so they can have 3-D scenes. Movies that were shot in 2-D, that were meant to be seen in 2-D, will be released in 3-D and up-priced to 12 or 15 bucks; more, if you’re going to
IMAX. And they’re building a lot of IMAX theaters. A whole lot.

So we’ve got the Thor movie, already filmed, being retrofitted. And the Captain America movie will be in 3-D. Yeah, that’s just what they’re going to need to make The Red Skull look dangerous.

I understand we’re just a couple years away from an
amazing new teevee set that will make today’s 3-D tubes look like wallpaper.
We’ll see, but until then I can’t tell you how pleased I am to hear that
director Christopher Nolan is shooting the next Batman movie in 2-D… unless, the producer tells me, the studio demands it. Humph. We’ll see.

If time is the fourth dimension, then I want a 4-D movie
to take me back in time when movies were entertainment and art and not simply “me-too” gimmicks. As Roger Ebert brilliantly states, “3-D is a waste of a perfectly good dimension… It is suicidal. It adds nothing essential to the
movie-going experience.”

Okay. My position on the future of 3-D, like Roger’s, is spelled out.

I didn’t see Avatar, but I’ll bet you a boatload of lawyers will be seeing its X-rated sequel this fall.

As it turns out there was an alien sex scene in Avatar, but it was cut because somebody thought showing the two leading blue characters hooking their tails together on-screen would jeopardize the movie’s rating or the merchandising licensees’ delicate sensibilities.

Warner Bros. is now so committed to getting a Superman film out the door by 2013 that it’s now showing up in press releases from partners.

IMAX, as part of their earnings statement, announced that they’ve signed a deal with Warner Bros. to release 20 films in IMAX format up to 2013. And on the list is a new Superman film.

This would seem to back up that Warner Bros. really is taking the Siegel Estate threat seriously, which states that if a movie wasn’t going to be in release by 2013 they would be in breach and owe the estate a large sum of cash.

Of course, as we all know, things can happen, production can get weird, and I’m sure that there are ways out of all of those clauses– but it’s still an encouraging sign.

The Point Radio: ‘Supernatural’ Heating Up For The Season

Season five of SUPERNATURAL has been a game changer, but there is still more on the way before what could be the series finale. We begin our look at the show with a visit from “Bobby” (Jim Beaver) and how his role has changed in the last few months. Plus IRON MAN 2 in IMax and Jackie Earle as another DC bad ass.

Don’t forget that you can now enjoy THE POINT 24 hours a Day – 7 Days a week!. Updates on all parts of pop culture, special programming by some of your favorite personalities and the biggest variety of contemporary music on the net – plus there is a great round of new programs on the air including classic radio each night at 12mid (Eastern) on RETRO RADIO and COMICMIX’s Mark Wheatley hitting the FREQUENCY every Saturday ay 9pm.

It was almost inevitable.

The Twilight Saga: Eclipse, the third movie in Summit Entertainment’s adaptations of Stephenie Meyer’s Twilight books, will be released in IMAX theatres simultaneously with the movie’s nationwide release on June 30, 2010. The first Twilight movie to be released in IMAX theatres, IMAX Corporation and Summit Entertainment will digitally re-master Eclipse to enhance both the image and sound quality. Eclipse once again stars Kristen Stewart, Robert Pattinson and Taylor Lautner.

The interesting question: for how long? New Moon had a huge opening and didn’t last long, so it will only stay in IMAX for two weeks, then be replaced on July 16th by Christopher Nolan’s Inception.

The Point Radio: Inside THE VAMPIRE DIARIES

The CW series VAMPIRE DIARIES might be the first break out hit of the new TV season, but with the subject matter, that’s no big surprise.  Meet the cast of the show and find out how they are riding the crest of the Vampire Craze and how the TV series will or won’t be following the best felling novels. Plus news on the best selling comic in the last 30 days, a new TRANSFORMERS series, a FAMILY CIRCUS collection (come on, you know you love it) and Spidey is in Imax but what about 3-D?

PRESS THE BUTTONto Get The Point!

Don’t forget that you can now enjoy THE POINT 24 hours a Day – 7 Days a week!. Updates on all parts of pop culture, special programming by some of your favorite personalities and the biggest variety of contemporary music on the net.

To the surprise of few, IMAX Corp. and Columbia Pictures announced that Spider-Man 4 will be released to IMAX theatres simultaneously with the film’s worldwide release on May 5, 2011. Spidey 4 reunites director Sam Raimi with stars Tobey Maguire and Kirsten Dunst, and will be the first Spidey film under the new regime.

Quite seriously, if you thought the Spidey-Cam was tough to move around before, just imagine what it’s going to be like to move a Spidey-IMAX-Cam…

It makes sense – the history of comics told in…comics! Plus Michael Bey promises a treat for Imax moviegoers, and if you ever wondered how your favorite TV program ended we can show you!

Don’t forget that you can now enjoy THE POINT 24/7. Updates on all parts of pop culture, special progarmming by some of your favorite personalities and the biggest variety of contemporary music on the net.

Watchmen: So, about that big blue…

…yyyyyyyyeah. I saw the film with a number of women in the group and the subject arose, so to speak. I mean, IMAX and everything. No wonder Drieberg was having problems.

This video may sum up the problem nicely. Do I really have to tell you that it’s not safe for work?