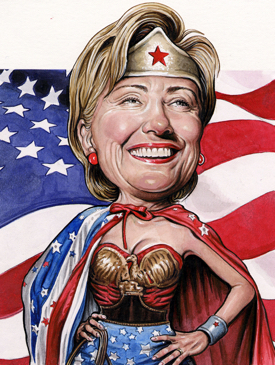 In the spring of 1971, I met a girl. The first time I saw her, we were, appropriately enough, in a class on political and civil rights. She had thick blond hair, big glasses. Wore no makeup. And she exuded this strength of self-possession I found magnetic. –President Bill Clinton, 2016 Democratic National Convention, Philadelphia, Pennsylvania
Lock Her Up!!! – Rallying Cry at 2016 Republican National Convention

In my not so humble opinion, the Wonder Woman trailer definitely shows a lot of promise.

But I’m not talking about Princess Diana of Themiscrya. I mean that other Wonder Woman – Hillary Rodham Clinton.

You may be thinking “What trailer? I mean the one starring Mrs. Clinton for the last 50 or so years of her life, during much of which she has been in the public eye – or bull’s-eye – and not just as FLOTUS, New York Senator, and Secretary of State. Hillary’s extensive involvement in politics goes back to 1960, when, as a 13-year old, she helped canvass for Richard Nixon, and then, four years later, she worked for the Goldwater campaign.

Yes, ladies and gentlemen, Hillary Rodham started her political life as a Republican. 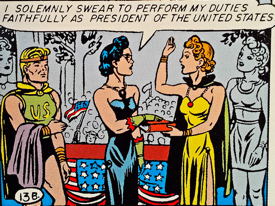 I have never understood the incredibly vicious vitriol directed towards Hillary, or her husband, for that matter. And so much of it is not political; it’s personal. The other day a woman at work said to me that she hated her. I asked her why. She said it was (and I’m paraphrasing) “because she stayed with her husband despite his many adulteries. What woman would do that? I wouldn’t. Would you?” For the record, well, no, I wouldn’t, but, I said, “It’s her marriage, not mine, and not yours.” (And also for the record, this woman did not say anything about Hillary staying with her husband for her own personal political ambitions.) I’ve heard variations of this theme for just about forever.

Sometimes I think television itself, as a media form, just doesn’t like her, the way it didn’t like Richard Nixon when he debated John F. Kennedy back in 1960. It’s just one of the mysteries of the modern media age that some people just don’t come across well on the screen. Hillary, despite being a baby boomer – so that you would think that she would be very comfortable with the television camera – always looks, well, not nervous, but tense; and yet I have never seen a better display of pure aplomb than that 13-hour grueling Benghazi kangaroo court trial that Mrs. Clinton was forced to endure. And even then, Hillary haters, including Fox News and other right-wing media, boldly declared that the reason she was so relaxed was because she was on Valium. This claim was quickly ignored by the next news cycle.

Before I sat down to write this column, I did a bit of research and found a great article over at the webzine Slate. In “The Hillary Haters” (July 24 2016), writer Michelle Goldberg went out and actually asked some “common” folk just exactly what they have against her. Here are some of their answers:

“She strikes me as programmed and robotic.”

“She is disingenuous and lies blatantly.”

“If I could make her a profit she’d be my best friend.”

Look, I feel it too. There is “Something About Hillary” that annoys me. I know she capable, I know she’s brilliant, and I know she’s been demonized. But she lacks that something that stops me from being crazy about her. I don’t know what it is. I’ve never met her, not even to shake her hand, but there is a but there….well, let me tell you a story.

A long time ago in a galaxy far, far away, in an enclave out on Eastern Long Island called the Hamptons, my mother’s friend noticed a big brouhaha across the street from her. She looked, and she saw Bill Clinton surrounded by people and press and, of course, secret service agents. Mom’s friend said that she never felt such a wave of pure charisma in her life, it could have knocked her over with a feather, and not only was he in a crush, a mob, but he was also at least 100 feet away from her.

She was telling this to my mother over a cup of coffee in our kitchen. I was there as well.

“Was he with Hillary?” asked my mother, who was (and is) a big fan of the lady.

“Yeah, I think so. Who cares?” said her friend.

So is it a lack of charisma or her gender that is hurting “Hill?” Many a feminist writer has argued that the two are related, that a woman cannot have that charisma-bias because of her sex, but I don’t agree. There are plenty of women with it, from Sophia Loren to Senator Elizabeth Warner, so it’s not about looks. But here’s a thought…

Sophia Loren, Senator Warren, Rachel Maddow, Princess Diana, Melissa McCarthy… all these women and many more just have that natural élan, that certain something, that charisma which draws people in, makes us like them without knowing them, makes people pay attention –

Hillary doesn’t have that inborn gift. But the woman makes us pay attention, demands us to see her, to hear her, to listen to her…

Maybe it’s that which so many people resent.