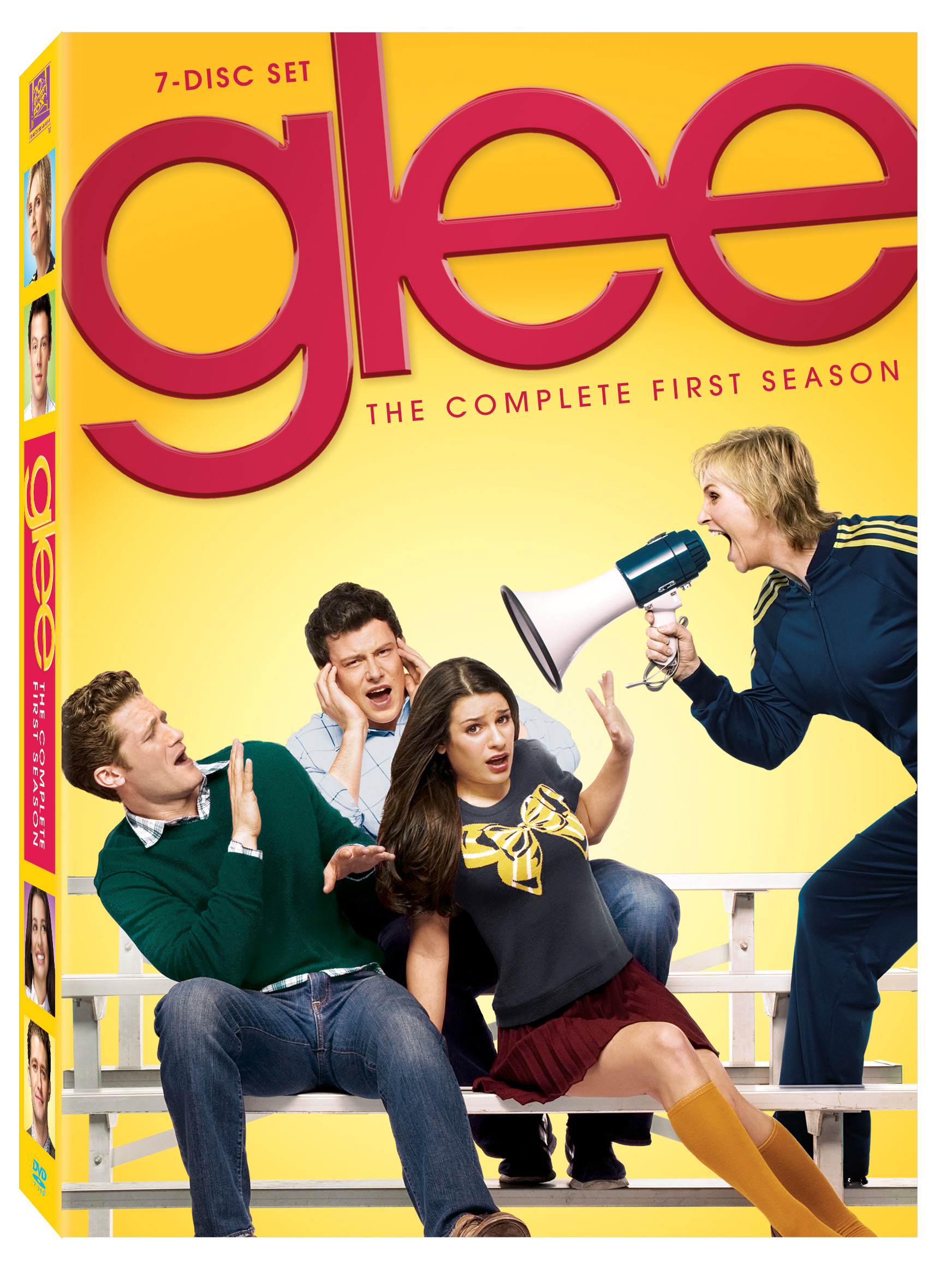 Glee]]] is frothy, delightful television that is as prone to being over-the-top as it is to be emotionally powerful. That it can successfully veer from one extreme to the other is one of the more impressive aspects of the Fox series, created by Ryan Murphy, Brad Falchuk and Ian Brennan. The show burst into the public consciousness with the clever airing of the pilot in the waning days of the 2008-2009 season and got people excited with something fresh and seemingly original (at least for prime time; no doubt Fox saw its potential after Disney’s success with [[[High School Musical]]].

When the show arrived last fall, it proved it was able to blend soap opera, music, and dance with an oddball assortment of characters with several vying for breakout status before Jane Lynch’s Sue Sylvester captured pop culture’s heart. The plight of the misfits that find themselves forming a glee club at Ohio’s William McKinley High School is the overarching theme as the team grows from a sextet to a full squad and prepares for sectionals and then regionals. As a result, we see them working on numerous pieces and with the show’s ratings climb, they stuffed in even more musical numbers which has neatly resulted in several soundtrack CDs already available.

When the show took an extended hiatus, Fox Home Entertainment released Glee, Volume One: Road to Sectionals to tide fans over. Now, in time for the premiere of season two this evening, Glee; The Complete First Season is out in both standard DVD and Blu-ray sets.

The show revels in its absurdity and doesn’t once try to make us think any of these characters are real or that the high school is really a place for learning. After all, we never see the kids in any academic class nor is homework ever a factor. Apparently, few of them need jobs or when they do can take them without breaking a sweat. We know there’s a faculty because we see them in the lounge where some of the more embarrassing adult shenanigans get discussed.

Where the series fell down was properly making us care for the dilemma Will Schuester (Matthew Morrison) faced with his ditzy, desperate, deceptive wife Terri (Jessalyn Gilsig). Her fake pregnancy sub-plot was totally wasting time for other stories and her expulsion from the marriage seemed pre-ordained and yet, she remains attached to the show like a barnacle that won’t go away.

END_OF_DOCUMENT_TOKEN_TO_BE_REPLACED

The Los Angeles Times is reporting that High School Musical star Zac Efron has been signed to play Jonny Quest in a live-action feature film. The movie, written by Dan Mazeau, is said to be a terrific young Indiana Jones style adventure. Mazeau was recently named one of the 10 screenwriters to watch by Variety.

Also looking to join the cast as a brawny Race Bannon is Dwayne Johnson.

The 21 year old Efron is about a decade too old for the character, based on the Hanna Barbera series form the ‘60s. He’s taking on the title part to distance himself from teen musical roles and establish himself as a leading player so for him it s a canny move.

“I’m more dismayed by news that folks at Warner Bros. are thinking of jettisoning the name Jonny Quest altogether,” Geoff Boucher wrote. “Why? I hear the thinking is that the vintage animation roots of Quest will somehow pair it in the public mind with Speed Racer, which was a major Warners pile-up as blockbuster films go, considering the investment, expectations and critical reception. I’m not surprised because, well, unnuanced thinking in Hollywood is commonplace, and instead of spending the time needed to judge individual properties by their own merits, lots of decision-makers act like my grandmother at the racetrack.”

Quantum of Solace exceeded the most optimistic of estimates by taking in an estimated $70.4 million at the box office this weekend. This makes the film the largest opening Bond epic in history, surpassing Die Another Die, which did $47.1 million in 2002. It also nearly doubled the $40.8 million take of Daniel Craig’s first outing as Ian Fleming’s celebrated spy, Casino Royale.

The film had already started opening around the world prior to North America and was raking in the euros.  It has already amassed $251.6 million before even opening in Japan, Australia and Spain. It opened on Friday to largely negative reviews from America critics but the franchise has always been largely critic proof.

They also loved Madagascar: Escape 2 Africa, which fell to number two, taking in $36.1 million. The other sophomore entry, Role Models, was in third with $11.7 million according to Box Office Mojo.

The teenyboppers have been sated by High School Musical 3: Senior Year, which is slowing down quickly and has fallen to fourth place, totaling $84.4 million after four weeks in play. This is still a hugely profitable film before even considering merchandise and home video.

The top five was rounded out by Clint Eastwood’s Changeling, which took in just $4.2 million and has earned just $27.6 million after four weeks.

The weekend’s other newcomer; Slumdog Millionaire opened to terrific reviews but is in limited release. On just ten screens it brought in A$350 million.

ComicMix Radio: His Name Is…

There are a lot of actors, even great ones, who struggle to get work. Maybe they need to take a page from the thick Book Of Bruce . From B movies to Top Rated TV, he’s made his name alone a cottage industry. So what is My Name Is Bruce?  Mr. Campbell tells us the back story and more, plus:

It’s all packed behind that little icon – just Press the Button!

It proved to be a light weekend for the movies, hampered by Halloween being on a Friday.  Disney’s High School Musical 3: Senior Year repeated in the number one slot, with $15 million despite having very slow Friday numbers as the audience went trick or treating.

Disney’s surprise hit, Beverly Hills Chihuahua, slid to sixth place but still brought in $4,747,000, pushing its total to date to $84,061,000. The rest of the top ten were repeat performer with most seeing 40-50% declines from their previous week’s performance. Disappointing performers, such as Pride & Glory, continue to keep audiences at bay, meaning poor final numbers for the studios.  This includes the political film, W., which has just $22,398,000 to show after three weeks.

Warner is doubly disappointed with Pride and the big budget dud Body of Lies, which has earned a mere $34,612,000 after four weeks – horrible showings for superstars Russell Crow and Leonardo DiPCaprio. Even though Guy Ritchie’s RockNRolla gained 804 screens and earned $1.75 million, its total earnings of $2,374,000 remain yet another failed release.

The mix of subject matter gives people plenty to choose from but clearly, people are electing to stay home.  All of that could change this month as highly anticipated films are ready to roll out starting with November 14’s Quantum of Solace.  Already opening around the world, Daniel Craig’s second go as James Bond has earned huge box office revenue and positive reviews.

It was no surprise to anyone that High School Musical 3: Senior Year was going to be huge, the question was only how big an opening it would have.  The final installment in Disney’s mammothly successful musical series exceeded expectations, taking in an estimated $42 million over the weekend according to Box Office Mojo. The film nabbed the crown for largest opening ever for a G-rated film and was also the number one box office attraction globally.

Right behind was Saw V, taking in a whopping $30.5 million and is poised to gain the title as most successful horror franchise of all time. The movie also exceeded expectations and sixth film is already on the drawing table for next Halloween.

It wasn’t all good news as Warner Bros.’ Pride & Glory opened in a fifth place to a disappointing $6,325,000.  The movie was better reviewed than the studio’s Body of Lies but this is the second disastrous opening in a row no doubt making the studio execs worry about the future.

The other new films this weekend was Anne Hathaway’s Passengers which Sony dumped into a handful of theatres with minimal marketing.  The movie received tepid reviews and took in just a few hundred thousand on 125 screens.  The far better received Synecdoche, New York with Philip Seymour Hoffman was also in extremely limited release taking in just $173,000.

Changeling, with Angelina Jolie, was on a scant 15 screens but the movie was well regarded and it’s per screen average of $33,467 was impressive which should be encouraging to Universal.

"Ultimately, there was something for everyone in the marketplace," Paul Dergarabedian, president of the box-office tracking firm Media by Numbers told the Los Angeles Times. "It shows that if you put the right movies in the market, people will turn out."

Rounding out the top five films was Fox’s Max Payne in third with $7.6 million and Disney’s surprise hit, Beverly Hills Chihuahua, which buried another $6.9 million bones.

Originally, ComicMix Radio planned to survey the usual round of comic book insiders as to who their favorite characters were: artist, writers, etc. But when we had the chance to pose the question to an actual costume wearing crusader, we leapt at the chance. Find out who The Defuser  – the winner of Who Wants To Be A Super Hero? – admires. Plus:
• Everyone took a look at Spidey’s Brand New Day and now it’s sold out!
• There’s a rare Hulk #1 variant – we’ll tell you how to get it
• Another sign of doomsday: High School Musical on the big screen!
Warning: Not Pressing The Button makes you an outsider and do you really want that?

Or subscribe to our podcasts via iTunes or RSS!

The Big ComicMix Broadcast for the weekend is here, complete with the scoop on a Quantum Leap movie and how YOU can help get it made. We also talk with one of the best known radio voices of the past four decades – Cousin Brucie Morrow – and top it off with heaps on news on new anime projects, High School Musical 2 and even a little jaunt to Funky Nasseau!

Come on Cousin – PRESS THE BUTTON!

Hours away from the moment when Spider-Man 3 lights up the screen, we’ve got your first review – and virtually spoiler free! Plus news on the return of a 60’s classic comic series, more High School Musical, Young Frankenstein, King Kong, making Family Guy "family safe" and we drag out The Runt for an encore!

Come on. The ticket line is too long anyway. Just press the button!