The good folks over at The Dollar Bin recently posted a recording of the Webcomics Roundtable from this year’s Heroes Con. The panel features webcomic creators Nicholas Gurewitch of Perry Bible Fellowship (the subject of this April interview), David Malki of Wondermark, Julia Wertz of The Fart Party, Chris Harding of We the Robots and Danielle Corsetto of Girls With Slingshots discussing a variety of webcomics-related topics. The chat was moderated by The Comics Reporter himself, Tom Spurgeon.

It’s a great listen for anyone interested in various facets of the webcomic scene, including the pros and cons of instant reader reaction and the economics of making webcomics a full-time gig. Many thanks to the Dollar Bin crew for making it available.

Heroes Con: Elsewhere On The Grid

Ah, convention season… when the wind-down from one show overlaps with the preparation for the next.

In case you missed our two-part report on last weekend’s Heroes Con in Charlotte, NC, Van Jensen provided ComicMix readers with a great summary of all the important happenings from the the convention, including some interesting thoughts on DC’s dilemma from the publisher’s rumor-plagued Executive Editor, Dan DiDio, as well as the unfortunate overshadowing of the sizeable small-press crowd.

There are some great roundups of the show to be found elsewhere on the ‘Tubes, too. Here are a few links to checkout if you want to read up on the show a bit more:

The Beat’s Heidi MacDonald has a great wrap-up of Heroes Con: Day Two, including a few more quotes related to all of the DiDio madness that has swept the industry press.

DiDio described DC’s audience as a “collector market” but defended DC’s use of character deaths and upheavals at the same time by saying these plot devices always new for some one.

END_OF_DOCUMENT_TOKEN_TO_BE_REPLACED 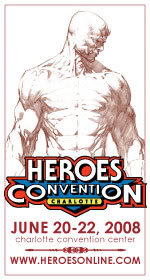 As I’m writing this, Heroes Con 2008 hasn’t quite wrapped up. I had to shuttle back to Atlanta to get ready for the day job Monday morning, so I missed out on a handful of interesting-sounding Sunday panels.

Friday and Saturday held plenty of excitement, intrigue and interest, though, so let’s go through what went down:

In case you didn’t read the update in my coverage of Friday’s State of the Industry panel, Mark Waid and Erik Larsen were just joking about bringing John Byrne on for Boom! Studios’ Farscape book. I didn’t make that clear enough, as it started a short-lived rumor around the ‘Net.

That panel had a few other moments of interest, including Waid saying the comics delivery system "sucks" and is "catastrophic." Dan DiDio also admitted to "cannibalizing" current comics readers through variant covers and the like.

But the line of the day came when Erik Larsen said webcomics "look like crap." Waid responded: "You’re 45. I don’t care what you think. I care what a 12-year-old thinks." Still, no one offered any good ideas on making the jump to electronically delivered comics.

Saturday had a lot of good panels. Too many, in fact, as I missed out on Disney’s panel on The Kingdom, its new comics publishing venture. Anyone attend that?

END_OF_DOCUMENT_TOKEN_TO_BE_REPLACED 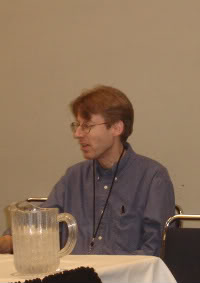 For those not attending Heroes Con in Charlotte this weekend, and for most of those who are, the big news is the rumors swirling around DC Comics.

There was chatter all day about DC Executive Editor Dan DiDio, and whether he might be out. The only real news, though, was that VP John Nee is resigning.

Sadly, everyone was so caught up in the rumormongering (which, so far, has turned out to be fluff) that they missed out on the panel of the weekend. The man behind the current greatest cartoon in the world, Cul de Sac, came down to talk about his strip and new collection.

That’s Richard Thompson at right, the quiet genius of the comics world. What you can’t see is the massively empty hall in front of him. Fewer than 15 people were there, and that’s just a shame.

That complaint aside, it’s been a fun if relaxed con so far with plenty of interesting tid bits:

The DC presence was pretty tense. DiDio stayed pretty gruff throughout the State of the Industry panel and dodged moderator Tom Spurgeon’s questions about the past week at DC, marred by Chuck Dixon’s acrimonious exit.

END_OF_DOCUMENT_TOKEN_TO_BE_REPLACED

As he often does with conventions of note, Tom Spurgeon of The Comics Reporter has posted a great, comprehensive roundup of information related to this weekend’s Heroes Convention in Charlotte, NC.

Spurgeon is moderating what appears to be every single panel at the show… which should get more interesting as the weekend progresses. Will he end up confusing the "Religion & Philosophy" panel with the "Webcomics Roundup?" Witness the madness for yourself!

Oh, and Spurgeon gets extra "good guy" points for the creepy animated-eye promo image I’ve included here, as well as posting the press release he received from Jim Rugg that was addressed to The Beat.

Heroes Con is happening this weekend, June 20-22, in Charlotte, NC.

Sorry, in a horrible rush getting ready for Heroes Con… you probably don’t have much time either, so here, real quick:

It’s our first special summer comic con Big ComicMix Broadcast, direct from The Heroes Convention in Charlotte, N.C.! Come along as we talk to fans, dealers and even fangirl-creator-actress Rosario Dawson – plus we look back at the world the way it was at the first Heroes Con 25 years ago!

Please press the button. We promised Rosario you would!