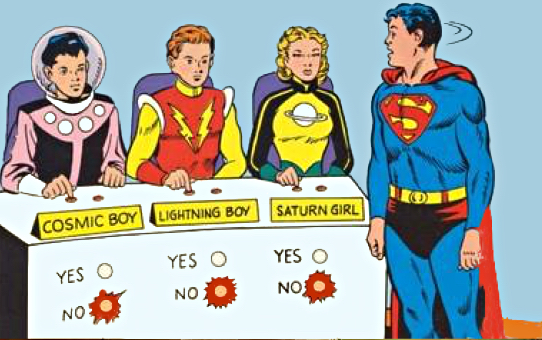 As a child, I loved the Legion of Super-Heroes. Teenagers from all over the galaxy formed a club together and saved the universe, sometimes several times an issue.

The rules for joining the Legion were a bit odd and really didn’t stand up to scrutiny. No one could have the same powers as another member, unless they were Superboy, Supergirl or Mon-El. Abilities that were not super on a hero’s planet could qualify that hero for membership, like telepathy and chameleons and magnetism. I suppose if we, as a people, were blind, someone with sight could be a member, but we wouldn’t know because there wouldn’t be comic books because, really, they are better when we can see the pictures.

Anyway, I didn’t really care about the Legion by-laws, since I would be a teenager if, by some chance, I lived 1000 years and could apply for membership. I cared about all these people, so different from one another, who still teamed up and made things better.

So that’s the lesson I’m urging us, the emissaries of Geek Culture, to learn from Where We Are Now.

Since the election results were announced last week, there have been a tremendous number of hate-crimes committed. This is in addition to the uptick in hate-crimes the year before.

ComicMix pal Heidi MacDonald recently reported on the latest bout of on-line harassment directed her way. If you click on the link and read the comments (which, normally, I would urge you not to do, but this time it’s educational), you’ll see a weird combination of solidarity, rage and condescension.

What struck me most forcefully was the anger some commenters held against superhero comics with female leads, especially if those characters riffed off earlier versions. While I don’t think Donald Trump won the Electoral College because RiRi Williams is Iron Man, he did capitalize on the same rage we see in those fans.

I mean, I understand that it’s annoying when a creative team takes one of my favorite characters in a direction I don’t like. I couldn’t stand what David and Meredith Finch did to Wonder Woman. That said, it was easy enough to skip their run on the title and re-read some of the thousands of other Wonder Woman stories that I had liked previously. I have reason to believe there are a similar number of Tony Stark Iron Man stories out there.

Also, there are lots and lots of other comics written and drawn by people who might have written or drawn a Tony Stark Iron Man story, and they might have stories about other characters that would appeal to this reader.

Marvel, and DC, and Disney, and other corporations do not owe their customers a steady diet of the same stuff. That would be a business model that is doomed to failure. There has to be constant attempts to broaden the market or in five or six decades, all the existing customers will be dead.

As a fandom, we can’t sit around and gripe when our favorite media (comics, film, TV, music, yada yada yada) don’t spew out a steady stream of the same stuff we loved as children. We cannot expect the entertainment industry to love us as much as our parents did.

Read what you like! Explore a little and, maybe, find more to like! Liking more different things is fun! And teaming up with people different from yourself lets you discover what your own super-powers might be.