Martha Thomases: Where Have You Gone Mr. Robinson?

It’s not a secret that I’m a huge fan of James Robinson. I’ve loved his work since I saw preview pages of The Golden Age more than twenty years ago. Those first few pages gave me goosebumps. When I met James, I thought he was cute and funny and completely charming. I’m a sucker for an accent.

So you can imagine how upset I am that I seem to be on the wrong side of the most recent kerfuffle in comics, the depiction of transgendered characters in the second issue of Airboy. I read that issue, and I didn’t notice.

I’m writing this because I think the reaction is overblown, and I think I might be wrong about that. I want to untangle my thoughts, and ask for advice on how to see this differently. Is this a failing of empathy on my part? Do I have a blind spot brought on by thoughtlessness or privilege or something else or all of the above?

(Note: I don’t want anyone to turn this around into some kind of “It’s their fault because they’re too sensitive” screed. I’m not blaming the victim. People read something and they have emotions about it. That’s what fiction is for.)

I read the first issue and thought it was hilarious. The depiction of James and artist/co-conspirator Greg Hinkle was so over the top and filled with self-loathing that I related immediately. With the drugs and the drinking and the indiscriminate sex, the story seemed to show a couple of middle-aged guys behaving in a way that I (and most of my friends) got out of our systems in our twenties.

And then (SPOILER ALERT!) Airboy showed up.

In the second issue, the one that upset some people, James and Greg try to figure out if Airboy is really there or if they’re hallucinating. Airboy is just as confused. They go to a bar. A gay bar that attracts drag queens (their usage) and transgendered women. James doesn’t let Greg explain that part to Airboy.

Hence, Airboy is upset when he discovers that the person who blew him in the bathroom has a penis.

In between, there is a two-page scene in which Robinson complains that he can’t get what he wants from writing comics for DC and Marvel. He says he’s pigeon-holed as the “Golden Age” guy. Rather than wondering where Airboy was at this time, I was too busy feeling guilty that perhaps I was part of the audience that contributed to James’ professional problems.

And when the story revealed where Airboy had been, I was more surprised that a comic book hero, already depicted as rigidly proper and straight, had participated in a sex act in a public restroom. At that point, his partner and her genitals seemed like the least startling element.

When I read about the controversy later, I felt terrible. Some people said they felt threatened. Others complained that the transgendered characters weren’t even characters. A few called for a boycott. A few demanded the scene be expunged from the trade paperback.

I went and re-read the story. I still didn’t get it. The transgendered characters aren’t developed, but neither is any other person in the story but our three leads. The bartender is there to serve drinks. The drug dealers are there to deal drugs. James’ then-wife, Jann, is there to show what James is pissing away. The point of view of the story is deliberately myopic.

To his credit, Robinson apologized. It’s a nice apology, heartfelt and contrite and gracious. He explains what he was trying to do, but he doesn’t try to weasel out of the hurt that he caused.

So, help me out here, members and allies of the LGBTQ community. What am I not seeing? I get that it’s thoughtless, but hurtful?

It seems to me that the solution is not to (only) bitch about this particular story (which every reader should do when so moved), but to enable more people to tell more different stories. A comic book medium with more transgendered writers and artists telling the stories they want to tell would lessen the impact of this particular comic book.

In the meantime, I’m grateful that my crush on James never came to anything. Clearly, I would have disappointed him. 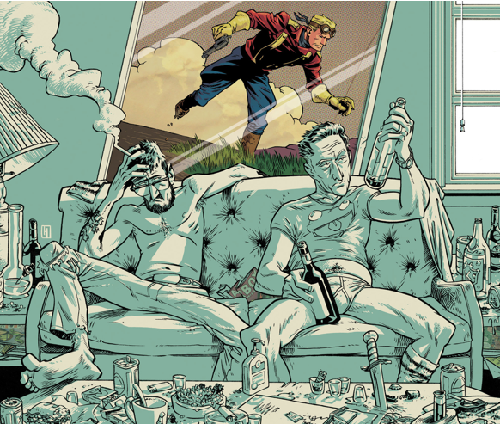 This may be hard to believe, but every once in a while the good folks at ComicMix L.L.C. act as though we really are a corporation. Yeah, it’s hard for me to believe that, too.

Last Sunday, our “senior” staff (a phrase that has nothing to do with age, until August 4th) met at Martha Thomases’ plush Greenwich Village condo. Adriane Nash and I were there right on time, but Glenn Hauman was caught in traffic in the Lincoln Tunnel, an all-too-common experience for those trying to escape the land of Christie. Not a problem; Martha’s kittycat Selina (yep; Selina – fangirls, go know) was making a rare public appearance. The conversation turned to this week’s comic books. I started out bitching about Bizarro #1 and Martha defended it nicely. No, I did not complain about internal consistency. I stopped doing that around Adventure Comics #285. Then Martha asked:

“I haven’t read it yet, but it’s at the top of my pile” I lied. Everybody knows I read my comics on my iPad. “I love the character, but I’m annoyed Chuck Dixon didn’t write it.”

Martha was about to say something like “Yes, but James Robinson did” but it is even better known that my opinion of James’ work is so high that if he were writing the back panels of milk cartons I’d sell my cow. So, instead, Martha said “Chuck Dixon could not have written this book.” Then she smiled that smile that would make the Cheshire Cat jealous.

Chuck Dixon has been writing Airboy off-and-on for 30 years for at least three different publishers. IDW has been Omnibusing it lately. Obviously, I like it. Indeed, I like the original Golden Age character. It was Dick Giordano’s favorite as a kid and we used to talk about it on the commuter train after leaving DC for the day, much to the chagrin of our fellow travelers who really didn’t care to eavesdrop on a couple of extreme fanboys.

I told Martha I was really looking forward to it, and she repeated “Chuck Dixon could not have written this book,” this time with a sort of Lauren Bacall delivery. 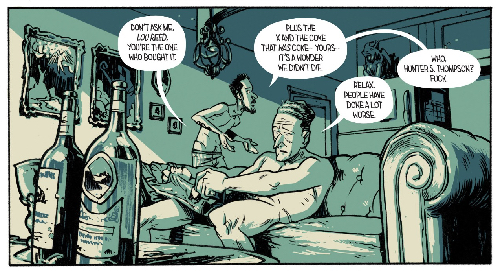 The naked guy is James Robinson. The clothed guy is Airboy artist Greg Hinkle. That was my review.

Martha was absolutely right. Chuck could not have written it.

I mean, he still could write Airboy and James even explains why in that very issue. But this one is something else. It reminds me of the script and layouts to the unpublished Sonic Disruptors #11, but only about three people would know that and one of them is dead.