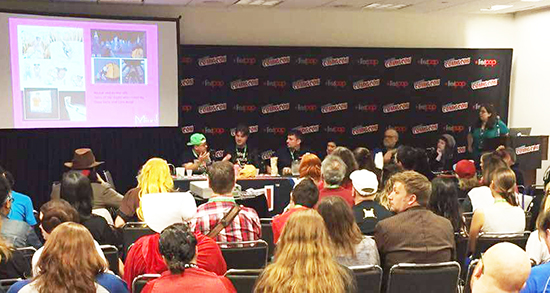 This past Saturday was our NYCC panel “Comics for Causes: Planned Parenthood and ComicMix.” On hand, in addition to myself (the center of the three-shot photo, surrounded by Molly and Mindy) were our editor-in-chief Mike Gold, my co-editor on Mine! Molly Jackson, Mindy Newell, Martha Thomases, and Glenn Hauman. The panel was made up of Mike, Molly, Mindy, Gabby Rivera, and myself. The panel was moderated by www.Geek.com managing editor Sheilah Villari; at the last minute Sean Von Gorman joined us as well.

We were humbled by over two hundred people that showed up for the panel, including at least half a dozen more Mine! contributors including Adam McGovern, Alice Meichi Li, Dave Kelly, Keith DeCandido and Tom Daly. Mindy spoke passionately about health care as both a comics writer and a nurse, Gabby addressed the importance of sex education and queer youth outreach, Sheilah talked about her and many other freelancers’ experiences having difficulty accessing affordable health care, Mike talked the current need for political activism, and Sean did an impression of me that was so spot on that someone assumed I had said something that he in fact said. 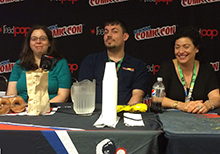 There was a question asked at the panel about discussing the different stories we’re contributing. I didn’t get a chance to answer that question at the time, so I’d like to use my column to talk about that now. Hey, it is my column after all.

One night some months ago a friend and I were talking over drinks. Mine! had come up in conversation, which lead to her sharing a story with me. Years ago she had been out at a club with a guy and that guy had given her something so strong the next thing she knew she was waking up in his bedroom. The next thing she did was go to a Planned Parenthood.

We talked about it further and decided that this was an important story to tell for the anthology. Unfortunately, it’s not important because it’s such a rare and unusual story, but rather that it is far too common. For many people in that situation, Planned Parenthood is their only option. I’m collaborating with artist Kristina Stipetic on this and made sure my friend approved the script before handing it off. I filled in some details and took some liberties, but the core of the story is all there. It was honestly one of the more emotionally draining things I’ve written. I can’t say that I hope you enjoy it exactly, but I hope all of you that pick up Mine! will come to this story and have a better understanding of how these situations often play out.

There are so many other great stories in Mine! too! Mindy is talking about a time before abortion was legal, Gabby about her Catholic upbringing, Mike about a couple that desperately needs health care but you don’t find out which one of them needs it until the end, and Keith came up from the audience to talk about how he and Tom Daly are doing a story about learning self-defense. Sean even made Keith show demonstrate a karate move!

You can preorder Mine! now on Backerkit, and you can preorder our t-shirts as well, if you so desire. Please go check it out if you haven’t reserved your copy yet, and spread the word!