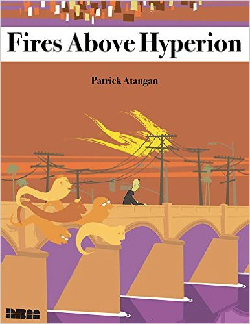 I love autobio graphic novels. I love them to the point that I hope to do one of my own. Fun Home, Blankets, Persepolis, Marbles, Epileptic, Clumsy, there are far too many excellent examples to name. Keeping all this in mind, ComicMix’s own Martha Thomases suggested I read Patrick Atangan’s Fires Above Hyperion to get my thoughts on it. I did in fact read it, and I did in fact have thoughts.

Prior to holding a copy of Fires Above Hyperion I was unfamiliar with Patrick Atangan. He’s an openly gay, multiracial author who has written and drawn many graphic novels before this, including Silk Tapestry and The Yellow Jar, and you can find out more about his work at www.nbmpub.com. This particular story documents his often antagonist relationship with dating and gay culture spanning two decades.

The story is told chronologically, starting with his Junior Prom, and goes into about eight different anecdotes over the course of twenty years of men he’s been involved with. There was very little reference to what the actual years are that these stories take place, if at all. I’m not sure I realized how much of a pet peeve that is for me until I read this book. When dealing with actual events that happened in real life, I like to have an idea of when they occurred, as it is made clear that gaps do exist between stories. Though, since it is in chronological order, it does make it easy to follow, and this might just be me being nit picky.

Fires Above Hyperion comes in at ninety-six pages. With about eight anecdotes to cover, it gives very little time to delve into the one time encounters, flings, and deeper relationships that make up the story. This ends up getting frustrating for me as the reader, when one of the early anecdotes is about a six-year relationship and how that has as much precious story real estate as an anecdote about a guy Patrick goes on a date with once.

Ultimately, this makes me feel like too much of an outsider. What makes books like Blankets and Clumsy so powerful is that they shared all sorts of little details. It felt like you were going through all the emotions with the author. It’s not as personal and intimate an experience here, and not only does it take away from the story overall, it prevents the humor from landing just right. The dark humor is present, but because I feel detached from the story as I’m reading it, it doesn’t seem to work. Instead of feeling a situation is funny, I end up just feeling kind of bad for Patrick or the person he was with, depending on the particular anecdote.

There is something in this story that is important for the medium, and that’s Patrick’s perspective as a gay man that’s part Latino and part Asian. The vast majority of graphic memoirs dealing with an author who is part of the LGBT community tend to be from a white author. Although this does not take up a lot of Fires Above Hyperion, it is brought up closer to the end of the story, and for me was the most interesting part to read.

Patrick Atangan is certainly talented and was able to lay out this book in a way that was easy to read, and that’s tougher than it sounds. The art itself simple, and in this instance I would argue that it is a bit too simple. Being done digitally, I noticed throughout the book a lot of copying and pasting different illustrations into later panels, and some of the men from earlier in the books are palette swapped and reused later. That did cause confusion at a couple of points, where I was wondering why this character from earlier in the book was back, until I figured out that this was actually a new character. While I don’t think that art being done that way is inherently bad, at ninety-six pages and a price point of $14.99, I think it’s a bit much.