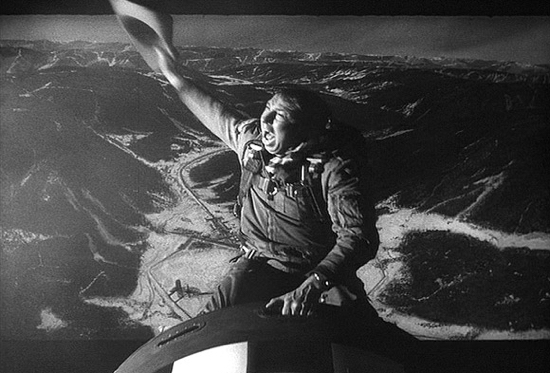 There, on the mountain and the sky,

On all the tragic scene they stare.

One asks for mournful melodies;

Their eyes mid many wrinkles, their eyes,

Their ancient, glittering eyes, are gay.

Here we are, having our last visit before the big hokey pokey on the Potomac and I am being reminded of post-apocalyptic fiction. If you can’t guess why I’m suffering this brain scratch, maybe you can be excused.

Now, for those of you still with me, hey gang – let’s talk end of the world!

Time was when apocalypses were rare, if not nonexistent, on theater screens and – I’m taking a flyer here – utterly absent from video. Today, though, IMDB’s entry lists 50 films that qualify as post-apocalyptic and surely there are more on the way. Why the deluge?

I can think of only four movies that dealt with them when I was callow and skinny: The World The Flesh and the Devil, On The Beach, Fail Safe, and our black comedy masterwork, Dr. Strangelove. I paid good money to see all of them and I didn’t feel cheated.

A quick look at them, one by one: The World The Flesh And The Devil, released in 1959, has a radioactive dust cloud killing almost everyone on Earth. Harry Belafonte plays a mine engineer who was underground during the catastrophe. He meets two other survivors and events proceed to what I guess is a happy ending… or at least a hopeful one.

On the Beach, first widely seen in 1959, gives us a world devastated by nuclear weapons. Unhappy ending. Enough said.

And Dr. Strangelove: another nuclear war story, adapted from a much more conventional novel and released in 1964, best described as broad satire. I won’t go into detail here: Strangelove is unique and if you haven’t seen it, remedy that.

To conclude this probably incomplete catalog. Fail Safe. Plot very like Strangelove’s, minus the satire.

Three of the four entertainments under consideration carry strong anti-war messages and the fourth, the Belafonte flick, delivers the same warning a bit more obliquely.

This kind of plotting certainly has its uses, allowing writers to create situations for their heroes to have adventures in without worrying about those pesky facts, a boon print guys were enjoying before the movie guys got around to it. (It might also allow misanthropes jolly-dreams, but we’ll ignore that.)

I guess that the most socially useful element of the doomsayers is as modern incarnations of whoever wrote the Bible’s Ecclesiastes. I hereby paraphrase/translate: Everything’s hopeless and besides it sucks. The original is more elegant.

If you’d like to see how a really good science fiction writers handles this theme find a copy of Roger Zelazny’s short story “A Rose for Ecclesiastes.”

I should find a copy myself. Maybe reading it again will brace me for a post-hokey pokey America. Couldn’t hurt, anyway.

See you next week. Maybe.