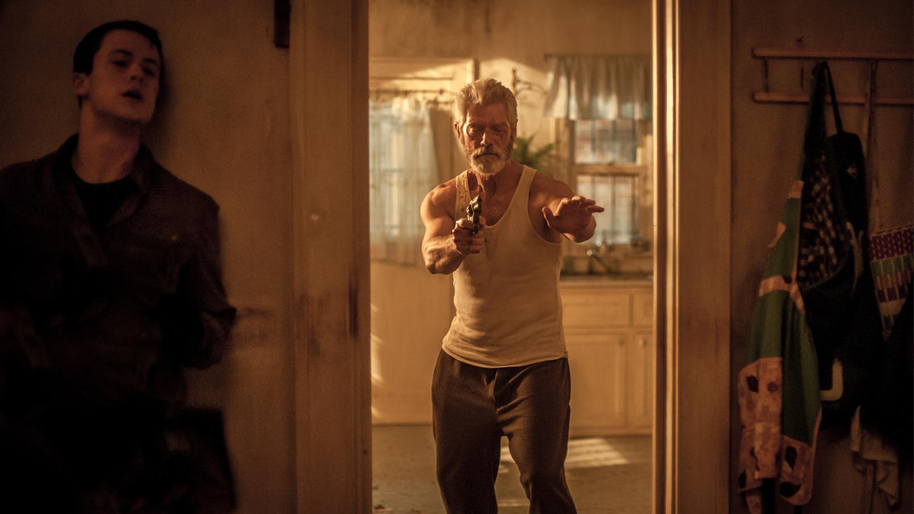 It’s hard to describe why Don’t Breathe had me so consistently scared while I was watching it… it almost seems like dream logic at this point a couple days removed from viewing. There’s a very clever sequence where they just quietly show you the house that 85% of the movie is going to take place in, and they do it by just having the camera pass through the house. It goes down one hallway, up through the ceiling and through the second floor in a kind of transparent Chekhov’s single-family home kind of thing, and while I knew it was guaranteed nothing terrible would happen during this sequence I could barely look at the screen. The sense of menace during Don’t Breathe was so powerful and pervasive that even when the movie stumbled with character or an overly long climax I couldn’t look away.

I understand that characters in horror movies often have to be quick sketches to properly get to the action in the allotted runtime, but Don’t Breathe might be skimping on the characters a little too much. It’s hard to root for characters that are criminals, especially when the crime is robbing a blind man, so the film goes way over the top to try and give us characters we can try and root for. Rocky (Jane Levy) has an abusive mother so extreme that Eminem would find it a little far-fetched. She’s just robbing houses to save up enough money to take her little sister and move her to California and a new start. Alex (Dylan Minnette) is a thief but a very practical one with a strict code about what they steal to maximize safety and minimize legal risk. He robs people but he also refuses to consider moving away because he has to take care of his aging father. Money (Daniel Zovatto), Rocky’s boyfriend, is more of a cliché troublemaker and, well, they show him getting murdered in the trailer so he doesn’t last very long. They want us to think these people are ok even though they do bad things, and it didn’t work for me at all. It took so much more for me to view these kids as sympathetic characters.

They had to make the robbery victim so much worse to get me to root for those characters; to turn him from victim to monster, and they do it with relish and gusto. I’m getting in to some spoilers here so this is your opportunity to turn back and not know.

<clicks away to check email while spoilerphobes leave>

We find out early in the second act that our blind homeowner has a woman chained up in his basement— not just any woman but the woman who killed his daughter in a car accident. It flips the equation on us: sure these kids are thieves, but this guy is a kidnapper. Kidnapping is a worse crime than robbery, and so we have our proper good versus evil story restored to us. Much later in the film we discover that he had impregnated the kidnapped woman and plans to do the same to Rocky in a intensely uncomfortable artificial insemination scene. While being one of the grossest scenes I’ve ever seen committed to film, it was nice to see it done without emphasizing the sexual aspects of Rocky’s peril. We see her experience this horror through angles that accentuate that she’s helpless and terrified, but that don’t linger on her being exposed or whatever. (Her cut jeans do seem to magically fix themselves when she escapes and needs to run around more, but I’m willing to let that go for propriety and avoiding an NC-17 rating.)

When I saw the first trailer for Don’t Breathe, the one that focused heavily on the sequence with the lights out in the basement, I thought that someone had decided to make an entire movie out of the night vision sequence at the end of The Silence of the Lambs and how torturous that would be to watch. Instead I got the scariest movie I’ve seen so far this year, a frightening little gem that might not play fair the entire time (every blind person is not Daredevil) but delivers where it counts. We’re coming up on the big horror season (I could see having horror movies in this space for the next month looking at the calendar) and it’s exciting to see the gauntlet thrown down so convincingly ahead of the parade of remakes (Blair Witch) and hastily reskinned versions of Alien (Morgan) coming down the pipe.