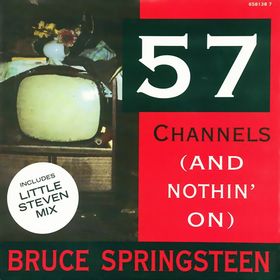 We switched ’round and ’round ’til half-past dawn

There was fifty-seven channels and nothin’ on

Only 57? Well, we were all younger when Bruce Springsteen wrote those lines. Now? I actually don’t know how many television channels I can summon to the flat screen that dominates our living room and no, I’m not going to count them. Leave it at this: a lot.

An upside to tv’s heterogeneity is that we have spread before our eager eyes a veritable smorgasbord of entertainment and some of it is good and some of it is very good – and yes, I’m aware that you and I might define “good” differently. There’s no way I know of to verify my hunch that there is more good stuff on the home screen than at the multiplex where it sometimes seems that film makers sacrifice drama in their rush to serve up yet another explosion. Does what I believe is the widespread devaluation of dramatic verities that date back at least to the fifth century BCE harm the audience? Hey, I’m not gonna touch that one.

Once, the absence of a household tv set or five might have indicated a family with very high standards – it’s Mozart and Shakespeare or nothing! Now, though, ‘t’aint necessarily so. If you abstain from tv watching, you deny yourself some of the best that current culture has to offer, even if you can make frequent trips to the theater and concert hall.

But there is a downside to video’s largesse and to find a precedent we have to go to nineteenth century Vienna. The late and wonderful Hans Fantel, musicologist, critic and writer, once argued that the waltz served as social glue in Vienna and was largely responsible for the city’s relative tranquility at the close of the nineteenth century

Because everyone, from the peasantry to the elite, could share in an esteem for this music. I think that the television of the mid-twentieth century did something similar.

There were no 57 channels, no sir. When I left Missouri in the early 60s, St. Louis had maybe five channels, and three of those belonged to the networks. So if a show was popular – I Love Lucy, Ed Sullivan, The Beverly Hillbillies – people often talked about it the next day. (The cute schoolteacher I share quarters with said she sometimes watched shows because she knew her colleagues would be discussing them and she didn’t want to be left out of the dialogue.

The Viennese had the waltz. We had Dragnet.

The United States is, arguably, more divided than at any time since the Civil War and if you think that I’m about to blame television for that… sorry to disappoint. Television did not cause the problem. But television may not be helping it, either.