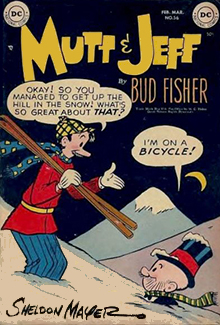 Do you remember the name of the first comic book you ever experienced? I do. It was a copy of DC Comics’ Mutt and Jeff, one of the very first daily newspaper comic strips and purportedly the first to be anthologized in what we today consider the comic book format. It was made as a subscription inducement giveaway.

This happened to me sometime around late 1953 or early 1954, when I was three years old. Okay, I was precocious (a synonym for “obnoxious”) but hardly anybody was that precocious. No, the comic book was read to me by my sister. Being almost seven years older, and much to her understandable chagrin, she was pressed into service as my babysitter. That certainly pegs her as precocious as well.

Marcia picked up a comic book from her stack, Mutt & Jeff #34, March 1952, and proceeded to read it to me. My sister had taste: that issue sported a cover by the legendary Shelly Mayer. Being only slightly out of toddlerhood, I learned how to recognize the shapes of the word “Mutt” and the word “Jeff.” DC ran the daily strips in two-page spreads, each one carrying the “Mutt and Jeff” logo. Page after page of them.

Proud of my achievement, I pointed to each logo and shouted, “Mutt and Jeff” over and over and over. For some reason, my sister/babysitter did not murder me on the spot.

What Marcia couldn’t have known at the time was that she had opened Pandora’s Box. 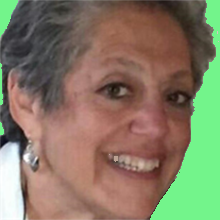 That initial experience led me to discover the comics in the newspapers, and over the next two years, those comic strips taught me how to read. This is actually quite bizarre as our paper of choice carried Pogo, Li’l Abner and Abbie ‘n’ Slats, and they didn’t quite speak English, at least not as we spoke it in the Midwest.

The newspaper strips led to my discovering comic books on my own – initially by finding Marcia’s own four-color stash, later by coercing my parents to buy me a comic book or two at the neighborhood drug store.

Of course, my love of comics led to many friendships and, ultimately, to comics fandom. A piece in the paper led me to fanzines, which led me to the conventions and then to advising comic shop retailers and organizing comic book conventions, and then to the first of two tenures at DC Comics, the co-creation of First Comics with Rick Obadiah … and to ComicMix with Glenn Hauman. With a whole lotta other stuff thrown in; allow me some modesty, okay? 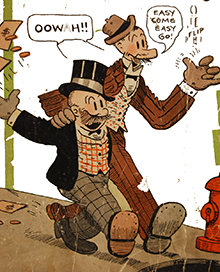 Last weekend, I left the Chicago Wizard World show a day early to go to Detroit. Marcia Judith Gold Bashara had died at the age of 73, due to heart problems. I was fortunate enough to see her one last time on my way to the convention, spending a day with Marcia, her husband and my friend of 53 years Salem, and my wonderful nieces Heidi and Cheri.

I used to tell people – usually, people writing articles about comics – that we comics people who were born during the baby boom and Fred Wertham’s anti-comics crusade decided to get into the racket as revenge for our parents’ tossing out our comics sometime in the mid-1960s.

And there’s some truth to that, but if not for my sister Marcia’s sharing her enjoyment of the comic book medium, I might not have had any comic books for my parents to toss.

For the record: about 15 years ago, I returned the favor by introducing Marcia to Will Eisner’s graphic novels. She absolutely loved them.