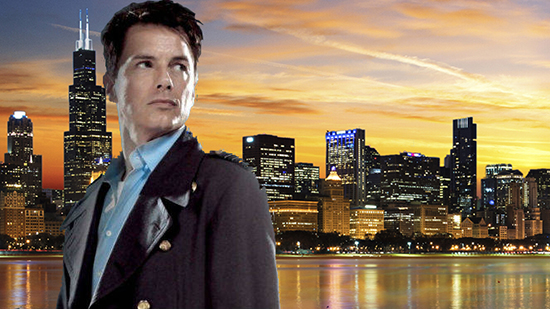 Well, last Sunday my pal John Ostrander did a lovely and quite informative column around his inability to come up with a topic. And tomorrow, my pal Denny O’Neil has an equally interesting column addressing the same basic issue. So, damn, I’d look pretty lame if I pulled the same stunt today, wouldn’t I?

Yeah, I know. I should be used to that.

So, instead of impressing you with my astonishing ability to wax on for 591 words about how there’s an echo chamber between my ears – it’s August; there’s supposed to be an echo chamber between my ears… or, at least, the Attica! chant – I’m going to write up a couple of paragraphs about a comic book show I’ll be doing in 15 days. Stream of consciousness, to paraphrase Kris Kristofferson, means you have nothing left to lose.

Danny Fingeroth, who’s name will magically reappear in Denny’s column tomorrow, finally found the one way to get me out to Chicago’s Wizard World show August 24 – 27. No, it’s not the availability of that wondrous delight, the Italian beef sammich. I get back to Chicago three or four times a year, so that’s not quite a deal maker.

No, Danny suggested we do a panel about America’s first mammoth Doctor Who convention, held as part of the Chicago Comicon (since sold to Wizard World) way back in 1982. Larry Charet, who, along with Bob Weinberg and me, were sponsors of the Comicon back then and Doctor Who had pretty much just taken a serious hold among American geekdom. We massively underestimated the number of folks who would be interested in attending… by… well… a lot. We made the Chicago Fire Department nervous, which, historically, is a dick move. We made the American Nazi Party nervous as well, but you’ll have to attend our panel in order to find out why.

I believe this was one of the first, if not the first, Doctor Who show that attracted the attention of a 15-year old named John Barrowman, who had been living in nearby Joliet Illinois at the time. John also will be a guest at Wizard World, so hopefully, I’ll be able to find out. Not that we’re taking credit for inspiring the man who became Captain Jack Harkness on Doctor Who and on Torchwood… but, with him no longer part of Arrow (at least for the time being), maybe the good folks at BBC-Wales can get him back to the timey-wimey stuff.

Of course, going home for Wizard World puts me back in the neighborhood of a hell of a lot of friends, as well as a gaggle of good folks that I haven’t pissed off for a while. Writers, artists, retailers, media folks, actors, broadcasters – it’s a fun place to be. And I’ve always had a great time at Wizard World Chicago, even though it’s actually in Rosemont Illinois, a town sandwiched in between the City of Chicago and the Airport of O’Hare. If you go there, check out Rosemont’s water tower and, if there are children around, try not to laugh out loud.

A month later, I’ll be at the Baltimore Comic-Con, one of my favorites. A damn good show run by damn good people.

That’s the reason we started these big comic book shows. Friendship, seeing people from all over the planet and making rude and obnoxious comments about the high price of stabbed comic books.

At least, we think those are comic books in there. Outside of the cover… who knows?