Mike Gold: Mad and the Madman 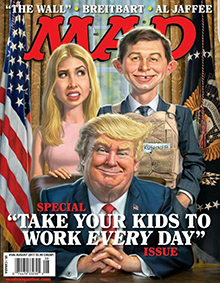 Donald Trump has been trying very hard to do a lot to this nation, thus far with pathetically little success. However, while he might not be making America great, he’s most certainly been making American comedy fantastic.

Take Stephen Colbert. After he took over The Late Show, he has been losing badly to The Tonight Show’s Jimmy Fallon. Then the Manchild from Hell won the election – thanks to a little help from his friends – and that very evening Colbert had something of a nervous breakdown, live on CBS. To his vast credit, he put all that energy into his job: making jokes at the expense of our Megalomaniac-In-Chief. Now, six months later, he’s leaped over Fallon in the ratings. 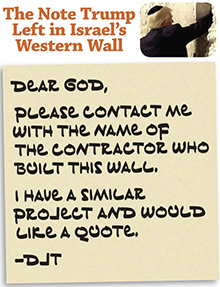 Certainly, there’s no shortage of material. Indeed, many other comics have made similar journeys on the Trump Turnpike (“what will that asshole think of next?”). Seth Myers, Samantha Bee, John Oliver, Bill Maher, Trevor Noah… let’s face it, if you’re a comedian who is disliked by the far-right minority, your career has had a great six months.

And so, amusingly, has Mad Magazine.

When it was founded 65 years ago – yup, it can file for Medicare but it should move fast – Mad became a major influence in the development of adolescent rebellion. It was the cutting edge of American humor at a time when professionals such as Ernie Kovacs, Lenny Bruce, and Lord Buckley were breaking down the barriers that had been surrounding stand-up comedy. Mad had a major impact upon at least two generations. 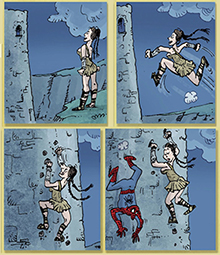 But, over time even the sharpest knife finds its edge going dull. Eventually, television shows such as The Simpsons, Beavis and Butt-Head and South Park became the rage (literally; parents raged against each of these shows) and Mad started to look positively geriatric. Sure, they struggled. They hired new talent, fussed with the format, and added interior color but, in my opinion, they remained trapped by that which always had been.

Last month, DC Comics hired a new showrunner for the vaunted magazine, and I don’t think they could have found a better person. Bill Morrison, who has been Matt Groening’s longtime collaborator and the first editor-in-chief of Bongo Comics (The Simpsons, Futurama…) was given the keys to the prop room. 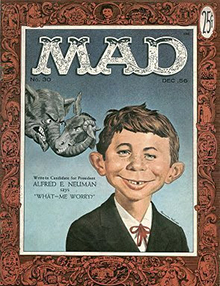 But, as it turns out, it is Donald Trump who is holding those doors open.

During the past several months, Mad has been following the path of Colbert et al. They’ve been doing some great stuff, and much of that has been at the expense of the poster boy of the paranoia marathon. They haven’t turned their backs on their roots and Mad does not follow the path of the former Mad writer (and Yippie! co-founder) Paul Krassner when Paul invented The Realist. Pop culture references abound as always, and even the great Sergio Aragonés remains along for the ride.

Bill Morrison has one hell of a leg up. Whether he can restore Mad Magazine to its greatest glory remains to be seen, but now it’s The Simpsons and South Park that are beginning to show their age. I don’t see anybody else in the on-deck circle, so he’s got one hell of an opportunity to make lightning strike twice.

As I said. He’s the right person for the job.