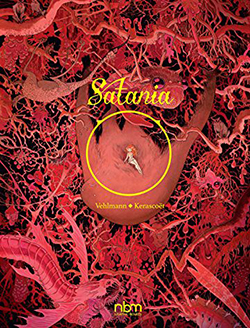 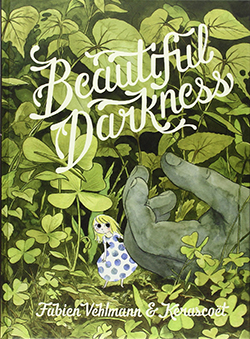 I’ve said this before, but it’s worth repeating; diversity in comics is more than just the characters we see on the page. Who is behind the page is incredibly important. Also important is where that page came from. You can read comics with all sorts of characters reflected on and off the pages, but if you’re only reading print comics from the big two then you’re just not getting that diverse of a selection.

Two of the biggest alternatives to traditional American comics we see get some coverage are webcomics and Manga. If you love comics and you haven’t dabbled in either, you should. Even if you’re just checking out Manga like Akira, it’s important to see how different people and places present stories in similar mediums. Another country that has a strong comics tradition is France.

One of my favorite graphic novels from France in the past few years has been Beautiful Darkness by Fabien Vehlmann and Keroscoet. The English translation was put out by Drawn & Quarterly back in 2014. It’s a gorgeously illustrated dark fairy tale that ingeniously juxtaposes the bleak nature of the story with whimsical characters and brilliant colors. I can’t possibly recommend it enough. The worst thing about it is that it eventually ends.

Fabien Vehlmann and Keroscoet are back at it again with a new graphic novel, Satania, from NBM Publishing. Satania at it’s core is the story of a girl, Charlie, trying to find her brother, Christopher. Once again Vehlmann and Keroscoet implement their brilliant use of juxtaposition having beautifully vibrant illustrations depicting some rather dark and hopeless situations. 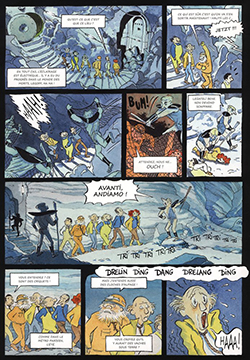 The journey that takes place in Satania is one that leads Charlie and a small rescue party to search deep underground for her missing brother. What starts as some gorgeous but mundane imagery of tunnels slowly warps and gets more and more twisted as you turn page after page. Not only do the backgrounds begin to twist and bend, but so do our heroes. Charlie is also haunted by the image of her mother; an emotionally abusive woman who’s done considerable damage to both Charlie and Christopher over the years.

Whereas Beautiful Darkness comes in at about 96 pages, Satania is a meatier story coming in at nearly 130 pages. For me, while Beautiful Darkness is a wonderful story, it did feel as if it could have benefited from running just a little longer to immerse me in the story more. With Satania I feel the story is at a perfect length. I was compelled to read it in one sitting and wanted nothing to distract me. I was fully engulfed and immersed in the increasingly dark, dangerously, and inhuman world that filled the pages. It’s rare that a comics work that isn’t multiple volumes hits me as powerfully as Satania did, but when I finished this graphic novel it stuck with me and still lingers as I write this. It’s so deeply tragic and upsetting while also hopeful and inspiring.

If you’re familiar with the works of Fabien Vehlmann and Keroscoet this may be their best outing yet. If you aren’t familiar, this is a great introduction to their work that will get you wanting more. I can’t recommend Satania enough, and once you read it you’ll understand why.