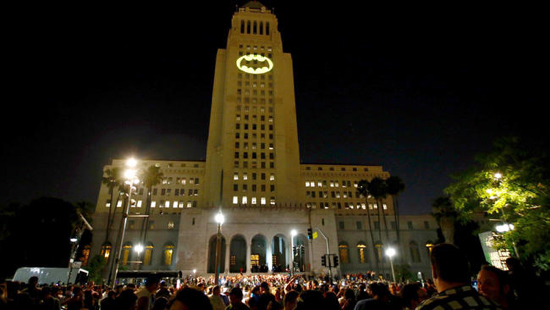 When Leonard Nimoy died, several comic conventions paused for a moment of silence as fans offered up the Vulcan salute. Those were lovely gestures as the nerd community showed how beloved the actor, and his signature role, was to them.

I wish that Batman’s Adam West had a signature gesture like that. A hands-on-hips pose means Superman. The Vulcan salute embodies all of Star Trek’s mythology. Television’s Wonder Woman had a spinning motion (it enabled her to change from her meek self into her heroic costume) that we of a certain age remember. Iron Man kind of owns that punching-the-ground-while-crouching pose. But TV’s Batman really could’ve used an iconic pose. 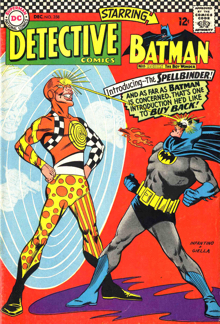 Perhaps it would be holding a bomb, with a lighted fuse, above one’s head? Perhaps that silly/sexy Batusi dance move, evoking a bat’s eyes and ears? Somehow they just don’t seem right. But he had something better.

The past weekend, the Batsignal was shining onto Los Angeles’s City Hall. And the folks behind it knew their stuff. This Batsignal was the version of the Batman emblem that Adam wore. The L.A. Times showed the crowds and the entire affair looked impressive.

Everyone seems to have an Adam West story to share. I have a few too. I was really struck by how kind and sweet the stories were. To his credit, Adam West seemed to be able to instantly understand, and respect, the different connections that fans had with his TV alter ego.

As Mark Evanier, and others, reminded us, Adam West was an actor and Batman was just one part he played. Kudos to MeTV for recently running episodes of 60s western and science fiction TV series featuring Adam West appearing in other roles, before running the very first two episodes of Batman.

And in many ways, playing Batman damaged his career. He was typecast and couldn’t get other roles subsequent to the series’ cancellation. It wasn’t until years later that he was able to figure it all out, with the help of his enthusiastic agent, Fred Westbrook. They found ways so that Adam could finally reap the financial benefits of his all-too-brief superhero years. 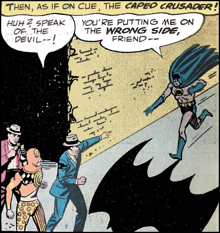 Sadly, Fred recently passed away too. He was an agent with a real respect for his clients. He was clearly a fanboy, but he used that drive to create engaging and profitable projects for his clients. Like Adam, Fred was a great guy too. And boy, did he love TV game shows. I don’t know if he was the nation’s biggest expert on TV game Shows, but it seemed like that to me.

I fell under the spell of Adam West’s Batman TV show, but it quickly translated into a love of comics. For many fans, seeing some of those covers we saw as kids bring indelible memories front and center.

Viewing these comics is like winning a ticket for a time machine. I’m immediately transported back to Pauline’s, the newsstand that was so close to my grandmother’s house. My dad would treat us to one treasure there (I’d always choose a comic) after our Italian Sunday Dinner each week.

Detective Comics #358 is that kind of a comic for me. There’s something about those DC silver age covers with red backgrounds that bring out the six-year-old in me. This issue features the debut of Batman’s unforgettable foe, Spellbinder!

What’s that, you say? Did you forget him? Yeah, well, I guess that’s understandable.

I think that everyone who read this story forgot about it. It’s not that it’s so bad. It’s just so bland. The Spellbinder is a bank robber with a gimmick – he can hypnotize people. And like a fairy tale, the Spellbinder fools Batman three times, until the Darknight Detective finally figures out how to defeat him. 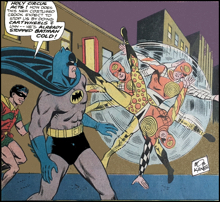 But that cover – wow! As a kid, I had thought this would’ve been the battle of all ages! It’s all about wild colors and an undoubtedly an epic battle about to be waged. I certainly expected to see Spellbinder pop up in an episode of the 60’s TV series, but he never did.

I wonder who could’ve played Spellbinder on TV?

Holy Fashion Faux Pas! What a mishmash of colors and patterns. If it were published today, Tim Gunn would have a fit. Oh, and I’m not even talking about Spellbinder’s costume. I’m talking about those clashing Detective Comics and Batman logos. Spellbinder’s nutty costume is an absurd thing of beauty… and doubtlessly it struck fear into the hearts of comic artists everywhere. In fact, no one would draw him again for years. 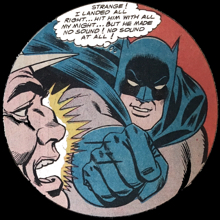 My copy of this comic is really special. It’s the file copy of longtime Batman editor, Jack Schiff. In those pre-internet days, publishers kept old comics on file for easy reference. Curiously, by the time this comic was published, Schiff was no longer editor on the Batman line. But he sold his file copy collection to Tim Ash Gray of Ithaca’s Comics For Collectors back in ’92, and Tim sold them to fans.

This issue is overflowing with nostalgic treasures, including:

So many of us are willingly spellbound by Batman. There are a lot of good things about that. Like a long train, we all jump on at different points. That’s kind of special too. For me, it all started with that TV series and Adam West.