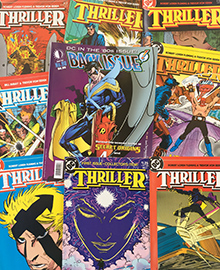 In the 80s, DC comics woke up the comics industry with Frank Miller’s The Dark Knight Returns and The Watchmen by Alan Moore & Dave Gibbons. Fans and retailers were anxiously awaiting the next big thing. Thriller, the comic that you couldn’t read fast enough, was supposed to be that next big thing. Management was excited about this fresh title. The DC marketing department got behind it and sent the writer on the road with a presentation. Distributors got behind the first issues. Comic shop retailers aggressively ordered the first issue.

And then…it wilted. Thriller wasn’t the next big thing. It doesn’t mean there weren’t a lot of great things about the series. There certainly were. In the recent issue of Back Issue magazine, I looked at Thriller and the tumultuous backstory. As a fan, I always liked the early issues of the series, and now, understanding the backstage drama, I love it, and respect it, even more.

Series co-creator and writer Robert Loren Fleming wasn’t able to fully participate in that article. Since it’s publication, there’s been a resurgence of interest in Thriller. And now, I’ve finally caught up with Robert Loren Fleming. So, as podcaster Karina Longworth always says: “Join us, won’t you?”… for an extended look from at the tragedy of DC Comic Lost Classic Thriller. 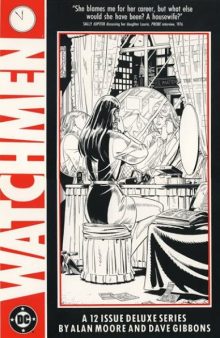 Robert Loren Fleming loved comics and was determined to break into the industry with his secret plan. It was the early 80s and he had started at DC as a proofreader. He loved working for the company and being a part of the industry. But he was impatient to become a comics writer. He eventually did and scripted favorites like the Flash and Ambush Bug. But it wasn’t easy to crack the code at DC comics.

“I found out pretty quickly it was kind of a closed shop – pretty hard to break in as a writer,” said Fleming. “It was really difficult to get a story sold.”

The legendary Julie Schwartz even had some advice for Fleming when he was pitching Superman ideas. “Julie told me to go home and not to think about any ideas. He told me twice, in case I missed it,” recalls Fleming with a chuckle. 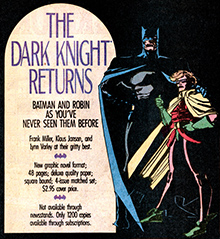 At that time there was an unwritten career path for young writers at DC. And as a proofreader, he was, more or less, on that long track. Aspiring writers would work on the corporate side for a while. Eventually, they’d be given their start with short story assignments for anthology comics. Writing assignments for the company’s prestigious superhero comics wouldn’t be offered for quite some time. If you showed talent and professionalism, you’d be awarded bigger assignments.

Fleming reasoned that the only way to break into quickly was “to come up with my own personal story and a big idea that it would be so good they have to take it.”

An idea was percolating in Fleming’s head for a new series that would showcase some of the things he loved: pulp adventures, an ensemble cast and a science fiction adventure that would shift away from the traditional superhero stories, dominating the market at that time.

“When I finished it, I took it to four or five editors. They wouldn’t even look at it.” Clearly, Fleming hadn’t yet paid his dues by working on smaller projects first. Looking back, Fleming realizes his secret plan was fueled by the audacity and courage that comes with youth.

He presented his idea to the top guy. “So I took it into Dick Giordano. <This was> jumping the chain of command,” said Fleming. Editor-in-Chief Giordano had no problem with Fleming bringing it directly to him. “He read the thing and 15 minutes later he bought it. Paul Levitz read it a few days later – he signed off too.”

Levitz suggested that a young artist named Trevor Von Eeden be assigned to the series. At that time, the Marvel series Master of Kung Fu, by Doug Moench and Paul Gulacy, was a big influence on Fleming. Fleming loved that series’ ensemble cast, the espionage themes and the casting of real people as comic characters. In fact, of the characters in his proposed Thriller series, Quo, was essentially Bruce Lee.

When Levitz showed Fleming the recent Batman Annual by Von Eeden, Fleming could see all of the elements he loved in Master of Kung Fu in the artist’s work. Fleming knew Von Eeden’s style would be perfect for Thriller.

One of the things Fleming didn’t realize – no up-and-coming young buck ever does – is that you don’t gain a lot of allies internally by jumping over the established system. The editors at that time were not amused.

“It created a strong reaction against me,” said Fleming. “A very negative reaction. One of them (an editor) came out and said to Dick, ‘You’re not going to let Fleming write it, are you?’”

It got worse. The editors conspired to see Flemings non-traditional idea and audacious career tactic fail. They put a number of obstacles in the way of Thriller.

Off Target with The Green Arrow

One obstacle, in particular, was the Green Arrow. At that time, Green Arrow was one of the characters who was always a bridesmaid but never a bride. He was a supporting player in the Justice League of America, a co-star in the groundbreaking Green Lantern – Green Arrow series and a staple of backup stories. He was finally getting the go-ahead to headline a comic with a four issue mini-series, written by Mike W. Barr.

Fleming recalls that Trevor Von Eeden was assigned as the series artist, specifically to keep Von Eeden busy. He’s too busy working on this Green Arrow series. The idea was that he’d be so consumed with this miniseries, and it would take so long for him to draw, that the young artist would lose his passion for Thriller.

But that did not happen. This Green Arrow mini-series looked phenomenal. Von Eeden delivered work that was fresh and exciting. One would think that he spent an inordinate amount of time on it. In reality, Fleming explains, the opposite was true.

Unbelievably, Trevor Von Eden finished all four in an incredibly quick amount of time – something like six or eight weeks. And then both the writer and artist were ready for Thriller.

Next week we’ll explore more Robert Loren Fleming’s memories and observations about what happens when you actually, against all odds, arrive at the starting line!

Interested in the full article in Back Issue #98? You can snag it here.