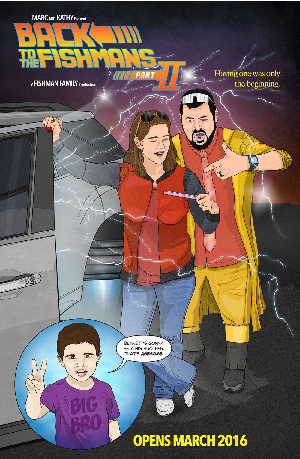 In light of all the morbid news flying around these days, sometimes you have to take a deep breath and remember where your joy is. Mine is up two short flights of stairs, attempting to figure out a way to extend his bedtime. He asks for juice. No. Water? No. Storytime? No. Play game? Go to sleep. And after his cat-timer has counted down from ten minutes to a sharp ding, my son retires to his toddler bed for the evening. As the Barenaked Ladies might ask

When you dream
What do you dream about?
Are they color or black and white, Yiddish or English
Or languages not yet conceived?
Are they silent or boisterous?
Do you hear noises just loud enough to be perceived?

These questions nip at me now because my wife and I are expecting our second child. We announced with my typical over-the-top bluster – see the art this week – not long ago via social media.

The decision to become a Fantastic Foursome instead of remaining a terrific trio was made without much trepidation or actual conversation. Put simply, even amidst all the calamity that exists with a three-and-a-half-year-old sharknado, there was an empty space in our hearts where another wee-one would fit. It stands to be said that both my wife and I are only children; both of us lamented for many years that we’d always pondered a life lived in a family unit versus being the lone soul of attention. And while my boy is the apple of my eye and the spoils of all my time and affection, it’s disgustingly true that I somehow have even more love to give. Pardon the unicorn vomiting rainbows in the corner.

But, truly, what a time to raise a family! I speak not of the modern luxuries of technology, or the immense libraries of literature allowing for picture-perfect childrearing mind you. I speak selfishly of the golden age of nerds into which I now bring my doomspawn. The other afternoon, I took my son and wife to Toys R’ Us. Why? So dad could buy a new Nerf gun, of course. And my son walked up and down the aisle, pointing out every single character he knew, proved to me he is living in a wonderland I could only have dreamt of when I was his age. Come to think of it, at his age I’d have no idea that Marvel and DC would own whole aisles of the toy store. And while most of the toys are movie or TV related, at their core there are pulpy roots.

My son, and future child are being raised in a world where nearly every movie or TV show of any value to them now streams into my home on demand. The video game systems in my home – both of which now old by current standards – have a library deeper than the entirety of the Nintendo catalog over the entirety of my childhood. There are a dozen comic book shops within 25 miles of my home, and a comic convention nearly every month. And that doesn’t take into consideration the online offerings of pulp fiction. Simply put, my children will have access to more content than I can honestly comprehend.

As they mature and begin to find their own paths, they will curate the trove of material to find themselves. My youth was spent finding a single outlet at a time, drilling it dry, and moving on to the next. Cape and cowl books begat the grim and gritty worlds of Image and Vertigo. Pop was pushed aside for punk, then ska, then metal, then receded back to alternative pop. In every case, I’d honestly reached a saturation point (where the available content to me in suburban Chicagoland was limited to the chain stores or knowing someone’s older brother willing to drive you to the cool part of town to find new material), then had to make the conscious choice to either seek the roots of the material I loved, or find something new instead. Now, should my children find an admiration for Batman, well, they could spend years soaking in every panel on a page, or every frame of film involving the Dark Knight, with a flick of the finger. Whereas their old man was once limited to the single shelf of full price graphic novels or pricier archived reprints and the picked-over remnants at the local Blockbuster. And that was well before the time where reviews readily existed to warn said old man of a not-great read. But I, as usual, digress.

At the beginning of this article, I’d mentioned the notion of finding my joy. Amidst all the stresses that adulting brings me – bills, not-yet-fully-funded-Kickstarters, a full time day job, a full time night job, and the whole “being a dad and a husband and a son and a friend” thing – having the ability to melt all of that away is key to my sanity. And when I see my son’s face light up over the silliest of things (a new Batman toy in a Happy Meal, or daddy getting first place in Mario Kart 64), the weight of the world is lifted off my sore shoulders. His joy is my joy. The nerdy world around him beckons every waking hour, with some comic-connected bit of entertainment ready to set his imagination on fire. And right behind him as he exclaims “Cyborg and Beast Boy fight Raven’s dad!” is me, with a smile from ear to ear.

How could I not want to bring another bundle of joy into a world like that?