Tagged: Back to the Future

We took a road trip up to San Jose last weekend to check out the first ever Silicon Valley Comic Con. This was Steve Wozniak (of Apple fame) & Stan Lee’s venture. As we should have guessed by the location alone, this wasn’t the kind of con we’re used to. It was nerd on nerd (tech meets comics) and way more male-centric than the cons we usually go to. There were some great guests though like Nathan Fillion, Jeremy Renner, William Shatner, and a Back To The Future reunion. Watch the video to see how it all went down.

Also, interesting to note, there were far fewer Deadpools (our count was barely in the double digits) and instead Marty McFly & Spider Man cosplay were every where we turned. And also we only saw one Spider Gwen, but tons of girls wearing Spider Man and Spider-Woman costumes. This says something about SoCal vs. NorCal, we just don’t know what. 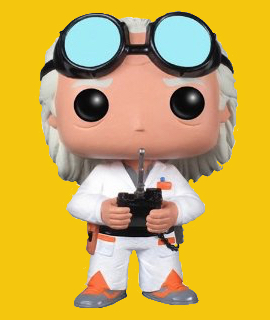 Hello. My name is Marc Alan Fishman, and I am … a collector. I’ve attempted many times to stop. I thought getting married, having a mortgage, and a kid would get in the way. It didn’t. I even have another kid on the way, and yet, I can’t shake off my problem. Shiny toys, gadgets, and brick-a-brak litter my life like dumbass xenophobic one liners litter Donald Trump’s presidential campaign. I’d heard once that the first step to overcoming a bad habit was to admit you had a problem. Well, I’ll be honest: I don’t actually have a problem collecting stuff. But I do have a budding problem with the crate culture that’s being cultivated out and about in this age of the Interwebs.

For those still living in a cave, let me bring you up to speed. The Internet is a large interconnected web of sites that offer news, information, and yes, means to buy and sell objects and services of interest. Taking a page out of the subscription services of yore, Loot Crate, Nerd Block, and umpteen other startups have opened their digital doors in order to pair nerds with extra cash with stashes of objects of unknown origin. Or to be a little less cryptic, a combination of overstocked items, and cheaply-produced trinkets by manufacturers looking for quick turnaround.

I freely, and sadly, admit to succumbing to peer pressure when I bit the bullet two months ago. Loot Crate must have paid a fine fortune to market themselves in my Facebook feed several times a day. And there, in all his Doctorly glory, stood a static Peter Capaldi telling me that the month’s crate was Time themed. He beckoned to me in his notorious brogue. “C’mon, ya wee bugger. Why not see what you’ll get? Ye only need to part with a little of that wasted PayPal money you’ve got stashed away fer’ a rainy day. Certainly if they’re showing me pretty face here, I’ll be waiting fer’ you in the box!” And then they sealed the deal with a First Timers discount. Three dollars off bought my love, damnit.

When the crate arrived, I was elated. Loot Crate promised it’d be like Christmas morning. Being Jewish, I didn’t know exactly how that would feel, but my goyim friends always made it sound like a big deal. So, I cracked open the “crate,” which was a cardboard box. I got a limited edition fifth-scale authentic replica of the Back to the Future II Hoverboard, a Doc Brown Funco Pop™ toy, a Bill and Ted’s Excellent Adventure tee shirt, and a Doctor Who Sonic Screwdriver spork. Oh… and a collectible button.

Is Christmas morning supposed to feel empty and hollow? Where I was shown promotional images that hinted at an item celebrating my favorite Doctor, I was gifted a plastic eating utensil – erected in the form of the previous Doctor’s iteration of the aforementioned Screwdriver. The shirt was nice. The Pop was cute. The Hoverboard was authentically replicated, and boxed in a nifty reflective package.

Had anyone in my life gifted these items to me otherwise, I’d be pleased as punch to have received them. Yet, upon unboxing, I felt no twinge of glee. Perhaps I simply was being too dismissive. I should wait another month, and see what new and lovely trinkets would arrive on my doorstep. What good is that twenty bucks doing in that Paypal account, anyways!?

And then Combat showed up on my doorstep. Inside? A pair of sunglasses with a bolted-on 2-D Shredder helmet from the old Teenage Mutant Ninja Turtles cartoon, a Vault Boy bobblehead from Fallout 4, a tiny plastic SD Blizzard villain figure, and a Loot Crate Exclusive Street Fighter II comic book. Again, I’d hoped for that unwieldy sense of joy at the box of goodies before me. Instead, I felt the pangs I often feel when I peruse the show floor at comic con.

I often find myself reflecting “All of these tchotchkes are cute, but really, do I need them?” And the answer has always been an abrupt No. While I admitted earlier to being a collector, that term comes with the weight of individualism behind it. As much as I’m a nerd-of-the-world – well-versed in the minutiae of Blizzard video games and Back to the Future – I’m also a finicky little fuck. Pardon my French.

The appeal of a random box of appropriately nerdy wares is certainly there. It’s the brown-paper bag stapled shut at the comic shop. It could contain an issue of The Atom that’s the bee’s knees! Of course it could contain Voodoo #1 from the New52 as well. The chance for something cool often sparks us to roll the dice. Loot Crate and their kin bank on this feeling. They hedge their bets by appealing to our shared culture of collectability – that even if we don’t personally love the items in the box, someone will, and will pay more for the item than we did. Suddenly Loot Crate is a micro-transaction investment! But nay, I say, my dear nerds.

Loot Crate is, at best, a great way to cultivate a collection of crap for someone who wants to be hip to nerd culture. For the well-versed dorks like myself, it’s the crib-note version of Crisis on Infinite Earths instead of the Absolute iteration. Good on the surface, but not much else.

Could I spend twenty bucks better? Probably. Will I? Maybe after next month’s box. While I’d love to cancel my subscription knowing full well two months has brought me little in the way of childish joy… the crate for December has a Star Wars collectible in it, and my wife called dibs.

No one ever said I wasn’t a hypocrite.