Is fandom “entitled”? A history of fan-made material 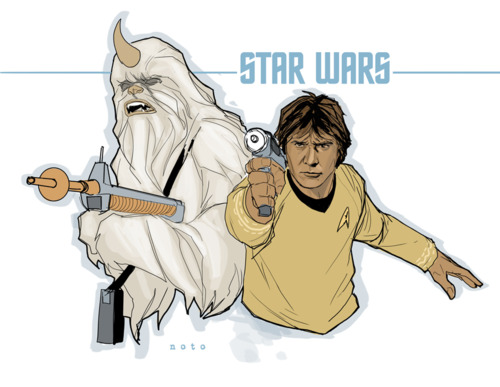 For those who came in late, a bunch of fans crowdsourced the funds to make a Star Trek fan film, Axanar. The funding campaign was outrageously successful, earning over 1.1 million dollars. That large an amount of money set off Paramount’s sensor array, and they quickly filed suit against said fans for unauthorized use of trademarked items. The folks behind Axanar counter-sued, claiming Paramount didn’t have hold of all the items they claimed.  It was going to get testy (and potentially untenable for Paramount if any of the points made in the counter-suit were deemed valid) until J.J. Abrams stepped in and convinced Paramount to calm down.

In response to said events, this week Paramount released a series of guidelines that fan films must follow in order to stay on the right side of the law, or at least on the right side of Paramount’s battery of white-lipped attorneys. Some of those rules are quite reasonable – the producers of the films can’t make merchandise of their property, and Paramount wrote up a paragraph of verbiage the producers must include in the film’s credits.  Some of the rules are a bit more stringent – the films can’t be more than 15 minutes long, and nobody in the production can have any “professional credits”.  That second one is drawing a number of eyes – some are arguing that it could mean you’re not allowed to use union workers for the production crew, something the unions will likely have something to say about.

Now, the real problem here is that for years there was an unspoken “line” to determine what was considered acceptable by fans’ creations. The exact details were never set in stone, but centered around basic ideas like “don’t make too much money, don’t do anything particularly untoward with the property,” and so on.  While the exact location and cartography of the line may not be known, it’s pretty obvious that Axanar crossed it miles back.  This was no simple pack of fan on cardboard sets and an eight-millimeter camera – the film (and its short prequel) had professional actors, some who had not only appeared on Trek before, but ones like Gary Graham who were actually portraying characters they had played on the actual shows.  The producers of Axanar had stated that in addition to making this film, they were effectively setting up a movie studio, dedicated to making more features in the same vein. So basically, they broke the “don’t make too much money” rule before they even stepped on the set.

These new “guidelines” are far stricter than what was allowed before, and are clearly in response (Retaliation? Perhaps…) to the liberties taken by the Axanar team.  To make an example, an apartment house has a tacit agreement that nobody can play their stereos above six, and even though people were playing them at seven or eight, nobody was complaining. But one guy threw a party and turned his stereo to ten, and the landlord had to step in and put his foot down, so now everyone has to keep their stereo at four.

There have been many conversations about the new rules online – many saw it as a potential death-blow to the staggeringly popular Star Trek Continues series, an acclaimed web series which was likewise inspired by another fan production, Starship Farragut. Another fan production, Renegades, simply announced they planned to excise all Trek references in its new production and become a completely new franchise.

But it was a conversation with an online friend that I found the most interesting.  He described fans who wanted to make amateur films as “entitled”.  That they somehow thought they had the right to make their own versions of other people’s IP and share them with the world. To say that I disagreed with him is an understatement.

First off, let’s look at the history of fandom… starting with the Epic of Gilgamesh.

The classic epic poems could arguably be described as the first fan fiction.  The stories were created by persons (largely) unknown, re-told and embellished by countless other creators.  The versions we know were assembled from various bits and bobs by people who usually ended up getting credit for “writing” them, though you could make a case that “editor” was a better description.

Jumping ahead centuries, Sherlock Holmes had its share of fan fiction. When Arthur Conan Doyle decided to stop writing about Holmes (because apparently he got tired of money) the fans rose to the cause. Doctor Who fans kept the flame alive during The Dark Years with fan productions like PROBE and the audio plays of BBV, which eventually became the official audio plays by Big Finish.  Indeed, many of the people who worked on those fan productions went on to create for the new series.

The big change between the fan films of past decades and those of today is technology.  Thirty years ago, such films were only seen at conventions, often in people’s hotel rooms.  Save for a copy of a copy of a VHS tape, there was no way to obtain one for yourself.  So too for fanzines – stories and art got a hundred or so copies made, which were hawked at conventions, eventually selling through their single print run, never to be heard of again.  Now, literally anyone can film an adventure in 4K quality, with cinema-quality effects, and make it available globally with the click of a button. This makes these fans no more “entitled” than the fans of yore, it just makes them a lot easier to get recognition. Indeed, many times these fan productions catch the eyes of the official producers in a positive way. A fan-made opening for Doctor Who was considered such a good idea, they got a hold of him and used the idea for the series’ new opening titles.

But at the core is that Line. It was virtually impossible to make money on fan material back in the day – it’s almost difficult NOT to now.  But still, for the most part, the desire of the fan is not to make money, but to share their love for the property, and show off their own ideas and jokes.  We’ve seen entire video games created by fans based on their favorite shows and movies.  The sheer breadth of creativity by the fans of the world’s various popular properties likely outstrips the original works by an order of magnitude.

But I don’t know of many fans who think they have a “right” to do so.

When a company steps up and points out a fan project that crosses the line, there is usually a hue and/or cry to some degree.  People will claim the company has “gotten greedy”, and there will be some muted mumblings of boycotts, but in almost all cases, the item in question has simply stepped past that Line, and pretty much deserved to get hit with the ban-hammer.  And in the cases where they weren’t, so far, cooler heads have prevailed.  I’ve talked in the past about the Harry Potter Website scare.  When the HP books (and especially the films) became popular, fan websites proliferated, with various names that used terms and phrases from the series.  And someone in the Warner Brothers legal department thought these sites would cause the downfall of the franchise, and the Cease and Desist orders went out like the exact opposite of Hogwarts acceptance letters. And the news articles began to appear about ten-year-olds getting threatening legal letters, and there was much clicking of tongues, and Warner Brothers quietly waved their hand and the complaints were cancelled.

It’s always been a dance between creator and fandom.  The creators know they owe their fans for the money they’ve paid into the property, and respect their desire to want to play in their garden. The challenge has been in making sure nobody goes too far with their work, and have it potentially become a challenge to the original.  In the age of the electric-type internet, that’s becoming more possible.

We’re starting to see amazing new ways that fans and originators can co-operate.  Cartoon Network just announced a program where they’d work with fan artists to turn their creations into limited run officially licensed items. The fans get both major recognition for their work, and a few dollars to boot, and the creators get to wet their beak, and maintain control of the property.

In a very real way, these rules set forth by Paramount are a GOOD thing.  Strict tho they may be, they set up an actual set of rules that fan creations can follow. The Line is now LITERALLY drawn, which means there’s less chance of stepping over it in error.