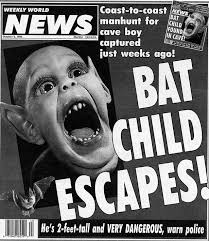 As I type these words, today is today. Usually, today is yesterday or a day before or so, and if any of our other columnists pulled this stunt I’d be bitching my brains off. But, to paraphrase stand-up philosopher par excellence Mel Brooks, “it’s good to be the king editor.”

I do have an excuse, and a good one at that. I just got back from Manhattan Island where we had a wonderful dinner with the classy part of ComicMix, The Tweeks, a.k.a. Maddy and Anya Ernst. Oh, yeah, their mom Jen was there as well – even in New York City, letting even adult-looking underagers wander about is frowned upon. The “us” part consisted of four members of the ComicMix crew – Tweeks’ producer and associate editor Adriane Nash, columnist Joe Corallo, utility infielder Wizardly Glenn Hauman, along with the amazing Brandy Hauman who hangs around with us to show us what it’s like to have a real job, and the oft-aforementioned geriatric boy editor.

Yeah, that’s my superhero name. Geriatric Boy. It fits me like a glove. And if it don’t fit… But I digress.

We had a wonderful time. Well, at least I did, but I don’t think the others were faking. We stayed so long the restaurant manager sorta suggested they wanted the opportunity to make money off of some other folks. We stood in front of the place jabbering for another hour.

We talked about the stuff you might think a gaggle of ComicMixers would discuss: Star Wars, Doctor Who, food, architecture, theater, improv, opera (a little bit), comics… Jen and I talked about Chicago because that’s what people who lived in Chicago always do. Hell, we do that when we’re only around New Yorkers as well. It seems to annoy the pettier of our east coast clan.

I’m not going to rat anybody out, and I’m certainly not going to discuss Maddy and Anya’s career plans or anything like that. Not only would doing so be rude of me, but I’d also be pre-empting material from The Tweeks’ weekly (if not more often) video blogs. If I did that, Adriane would roll up a copy of the Sunday New York Times and bop me on the nose with it, shouting “bad editor – bad editor.”

Sigh. I hate being a grown-up. Lucky for me, I only do that for a living. And even then, rarely.

Maddy, Anya and Jen live in Orange County, which makes going to that ridiculously overstuffed comic book convention fairly easy – for them. The show is in several weeks, and if you look through the website you can see the high quality of their interviews with celebrities and other people who hire public relations firms. All of them (I believe) are online here at ComicMix, and it’s really fun to watch how they’ve evolved and improved since they started this thing three years ago. When they were eleven. Now, they’re fourteen.

If the Tweeks are any indication, they’re making smarter and more stylish fourteen-year-olds than they did when I was that age. Oh, sure, I was smart all right, but in my case, that word qualified the next word, which was “aleck.”

I’m a big believer in mentoring. Indeed, when it comes to such activity I am a fundamentalist. I’m really proud of Adriane’s work in that regard – and that is the result of her work and not her being my daughter. Which, need I remind you, has been the coolest thing that ever happened to me.

This is not to take anything away from the Tweeks’ parents. Parenting is a different thing from mentoring. Mentors can say “See ya!” when they want to or need to. Parents have their gig forever. I dunno; maybe it’s something to do with “responsibility.”

It was a great evening. It was the reason I really love this job.

Happy summer solstice. If it seems like the longest day of the year… trust your instincts.