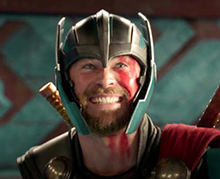 The hype was timed perfectly for this one. The new Marvel Studios movie, Thor: Ragnorak, was not going to be just another super-hero movie. It was directed by a respected indie director with comedy chops. The advertising wasn’t too heavy, nor did I feel like I had seen all the good stuff in the trailers.

Still, I was a bit worried. Thor: The Dark World, was, in my opinion, the worst of the Marvel Studio movies. When I watch it, instead of getting caught up in the story and the characters, I wonder what it felt like to be an actor on that set, wearing those ridiculous outfits. I wondered why a movie so dependent on Norse mythology was made so many years before Wonder Woman, which relied on Greek mythology (my personal favorite, no matter what the cool kids say).

I was again invited to a Marvel Friends & Family screening on Monday, and I can report that Ragnorak is big fun, especially if you can see it in a big theater, on a big screen, with all the seats filled with rabid geeks. There’s a lot of character-based humor. There are a couple of really great villains, including my long-time crush, Jeff Goldblum, whom I have loved since at least California Split. Cate Blanchett, as Hela, Goddess of Death, is not only evil incarnate, but she will make you believe that you, too, could fight in skin-tight leather and a spiked head-dress wider than your average car.

Tim Hiddleston is back as Loki, Idris Elba is again Heimdal, and Anthony Hopkins is Odin. It’s great having the band back together. 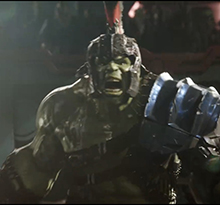 If you’ve seen the trailers, you know that Mark Ruffalo co-stars in this film as Bruce Banner/The Hulk. For those of us who have seen the Avengers movies, this is fun. If you’re a fan of classic superhero stories, where two heroes meet, fight, and then team-up, this is fun. If you haven’t done either of those things, the relationship might be unintelligible, but then, you probably aren’t in the audience.

Benedict Cumberbatch is his brooding, handsome self as Doctor Strange, in a scene that is entirely unnecessary, although it is fun.

The best new character (to the Marvel movie oeuvre) is Tessa Thompson as Valkyrie. A hard-living, hard-drinking mercenary with a past that ties her directly to Odin and Hela, she is a fully realized character from her first appearance, when she tried to take Thor as her prisoner and falls down drunk. The character is tough and vulnerable and completely capable, and Thompson never reduces her to the kind of “strong female character” we get all too often in mass-market movies.

According to the link above, “Thompson even summoned the courage to pitch Waititi on making Valkyrie bisexual, based on her comic book relationship with anthropologist Annabelle Riggs. ‘There’s this great illustration of them in a kiss,’ swoons Thompson, and while Valkyrie has yet to meet Annabelle in her Hollywood timeline – and who knows if she’ll get to – she convinced Waititi to shoot a glimpse of a woman walking out of Valkyrie’s bedroom. He kept it in the film as long as he could; eventually the bit had to be cut because it distracted from the scene’s vital exposition.”

This is a problem for me. There are so many scenes in which some random action is taking place so the characters can explain themselves and their motivations that they might as well have hired Michael York. I would have preferred more time with Valkyrie and fewer scenes of Asgardians walking through caves and forests.

As required by law, the movie ends with a bombastic CGI fight scene. It’s loud and there are lots of explosions, but these scenes exhaust me. The best part of this one is Fenrir, the giant wolf. The worst part is waiting for the Asgardians to line up for the getaway vehicle.

About these Asgardians. They are very white. This isn’t really a big deal for me, since nearly every Norse person alive when the myths were created was probably white. However, the Thor films, to their credit, have made a point of including actors of all races among the gods. We see a few swarthy faces in the crowd scenes, and there are Asian actors prominently featured in a couple of fights, but mostly, we see hundreds of helpless blondes, waiting for Thor to rescue them. The scenes on other realms have more varied body types and colors, and as a result, even those extras seem to have more personality.

Still, I was excited to see a movie in which a white male hero has a respectful, comradely relationship with a woman warrior of color. There was no flirtation. There was no “will they or won’t they” vibe. Or, at least, no more than there was between Loki and Hulk.

The gods can do it. Now let’s see if we can get corporate executives to do it, too.

The Point Radio: HANNIBAL Ready To Terrorize Your Summer

It’s truly The Beast and The Beauty as we explore HANNIBAL, the NBC series about to launch it’s 3rd season. Creator Bryan Fuller talks about some big changes in the show. Plus meet Lea Black. She was a REAL HOUSEWIFE OF MIAMI, she runs a multi-faceted company and now has a new fiction franchise about to hit bookshelves.

Everybody is talking AVENGERS AGE OF ULTRON, but there is another superhero film hitting the market this week you might want to check out. We sit down with the writer/director here in a few days. Be sure to follow us on Twitter @ThePointRadio.