Joe Corallo: Unmasked Is Back! 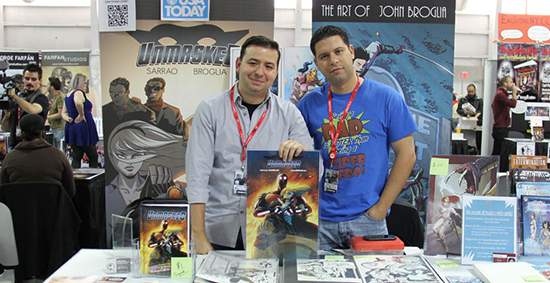 Well, I haven’t highlighted a Kickstarter in about a month so I’m going to end that dry spell right now.

Last week Michael Sarrao launched a Kickstarter campaign for his latest graphic novel, Unmasked Volume 2: Promethean. Unsurprisingly, this is the follow up to Unmasked: The New Age Heroes Volume 1 which was Kickstarted back on August 26, 2012. Maybe slightly more surprisingly this is also a follow up to Unmasked: Signal the 32 page one shot which bridges the events of Vol. 1 and Vol. 2 that was also funded on Kickstarter back on April 13, 2014. Both volumes were illustrated by John Broglia and Signal was illustrated by Anthony Gregori.

In total, this will be Michael Sarrao’s fourth comic book Kickstarter. All of his previous campaigns have been successful, and this campaign is only a week in and well on its way to reaching its goal. Michael was kind enough to send me a digital copy of the first chapter of Volume 2 so I can tell you all about it. 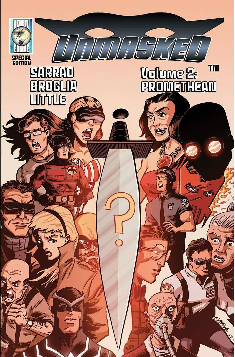 Before I get into it I’d like to talk a little bit about Unmasked in general. The story takes place in the fictional city of Seastone where superheroes debuted in 1938 and prominent through the 90s but were absent in the 2000s to be replaced by a more ruthless and violent group of heroes. This captures the interest of a rookie reporter, Paige Cruise, whose father was the world’s foremost superhero expert but has since gone missing. Paige Cruise is out to find out who these new heroes are and is on a mission to unmask them with mixed results.

Now you, loyal reader, may be saying to yourself, “Oh I guess Paige, a reporter, does a lot of research and snooping around to find out who these superheroes really are,” and I have to tell you, “Not exactly, no.” Then you might say, “Well she doesn’t just burst onto the scene and physically grab heroes masks off their faces, right?” To which I have to tell you, “Actually, that’s exactly what she does.” Yes, she physically grabs heroes masks off. I know, it sounds cheesy, but that’s the point. Unmasked is basically a blend of campy Silver Age comics fare played straight with a Watchmen aesthetic. Yes, the threats are all real, but they were in the Silver Age too.

Okay, you’re caught up now? Good. Onto the new stuff! 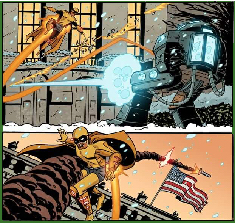 Unmasked Volume 2: Promethean opens more or less where the series left off. Paige Cruise is still on her quest to unmask heroes though now she herself openly desires to be one, we’re introduced to more chaotic players like Deathdevil, and we learn more about the past of the superheroes in this world.

Where Unmasked: The New Age Heroes Volume 1 feels heavy on the Watchmen tone, Volume 2 blends new elements together and has more of a The Wicked + The Divine tone to it. I love that Image series so I’m not complaining. Michael Sarrao plays a dangerous game here balancing some of the cheesier elements of superhero stories while keeping the tone consistent and getting the reader to take the story seriously and keep the stakes high.

This is the superhero comic you wanted to make and everyone told you no and gave you a long list of why you shouldn’t; mostly because there are just too many places it could all go wrong. Michael has not only successfully handled this material, but he did it his way and has two successful Kickstarters under his belt with this material alone and soon to have a third in the Unmasked-Verse when the Volume 2 campaign wraps up. 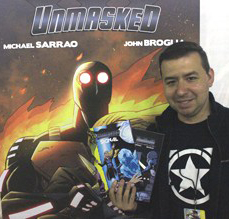 I do have to say that none of this would have likely happened for Michael if he didn’t get John Broglia to do the artwork. I may be a little biased because John is one of my favorite people working in comics right now, but he expertly executes a concept that walks a thin line. He gives Unmasked a pop art vibe, with the vital help of colorist Paul Little, elevating the story far more than any words could. Just skimming through these pages you can interpret the tone of this book flawless. It’s a necessary skill in comics, but difficult to master. John Broglia makes it look all too easy.

Having read the first chapter of Unmasked Volume 2: Promethean I can honestly say it has a lot of promise and it’s a stronger start than the first volume. If you’re into indie superhero titles, this is required reading. Check out their Kickstarter campaign and think about donating.

Join me next week when I interview a comic creator on a new project and then the week after when I get back to writing really pretentious stuff!