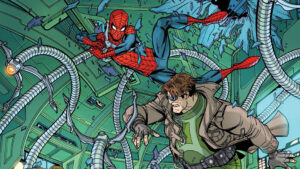 Before we move on to my regularly scheduled column, I have to plug the Kickstarter going for a ComicMix comics collection running through September 15th. It’s got a lot of great talent like Neil Gaiman, Gabby Rivera and Gerard Way. Check it out!

Now that that’s out of the way, let me get back to my hot takes on the comics biz.

Last month I wrote about Spider-Man: Homecoming and how I wish they had more comics the reflected that interpretation of the character. There isn’t really a comic they put out recently that does, but I heard Spidey is kind of close so I picked up the first trade.

Spidey originally hit the stands back December of 2015 at #25 on the sales charts equating to 65,503 copies sold. The idea was to do an out of continuity Spider-Man that went back to basics; Peter Parker is back in high school, he’s back to crushing on Gwen Stacy, he’s back to taking pictures of Spider-Man for JJ, Aunt May is back to struggling to pay her bills, the bad guys aren’t quite as deadly serious, the book is more light-hearted and the stakes are lowered.

The series is written by Robbie Thompson and the first three issues are illustrated by Nick Bradshaw with Jim Campbell and Rachelle Rosenberg coloring. In the first three issues we have run ins with Doc Ock, Sandman, and Lizard. All three of them are doing what you normally expect them to do; Doc Ock is trying to steal technology, Sandman is trying to rob banks, and Lizard is trying to make more lizard people. While it’s all pretty goofy and at least somewhat self aware, Nick’s art is very sleek and his heavy inks with Jim and Rachelle’s colors really make the pages pop. It feels like Saturday morning cartoon quality work. Some of the characters could look a little more different from each other as I felt his Peter Parker and Harry Osborn look too similar, but I also acknowledge that’s a bit overly critical.

After issue three, the series takes a bit of a turn.

Nick Bradshaw has a very distinct style. Once he leaves after issue three, the rest of this trade is illustrated by Andre Lima Araujo. Andre’s style is drastically different from Nick’s. Gone are the heavy inks and Saturday morning cartoon look. In its place are very thin line inks, and the kind of art you may expect in a Top Shelf or Pantheon type graphic novel. Facial expressions and other little details like sweat are more prominent. The teenage angst and awkwardness spills out of the pages more, but the tone is so different from this art style that it’s jarring. On top of all that, in issue six Iron Man teams up with Spider-Man to stop Vulture from stealing things and it felt like such a push to do something that might tie in somewhat to Spider-Man: Homecoming that it immediately sucked me out of the story. 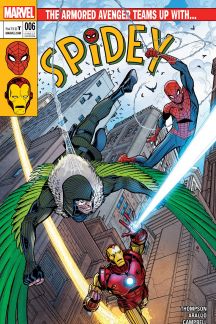 The most disappointing thing about reading Spidey after seeing Spider-Man: Homecoming is seeing how few liberties they take with a comic that isn’t in continuity. They don’t really change up the characters too much, everyone is still white who was white, all the characters are back doing exactly what you already know they do. What’s the point in taking another shot at retelling the early years of Spider-Man if you’re just going to give me everything we already knew and how we already knew it? This is likely at least part of why the series ends at issue twelve, making it only two volumes on trade paperback.

Overall, Spidey Vol. 1 was fun, had a few exceptional moments, but overall fell a bit flat. If you absolutely need more simple Spider-Man stories, you absolutely should pick this up. Or if you have a child in your life around ages 8-12 this is probably the most appropriate Spider-Man title for them to read. Spidey also gets bonus points for not having parallel universes, time travelling, and clones. Especially for not having clones.

It feels good to write about comics I’m reading again. So good even, I may just do it again next week!