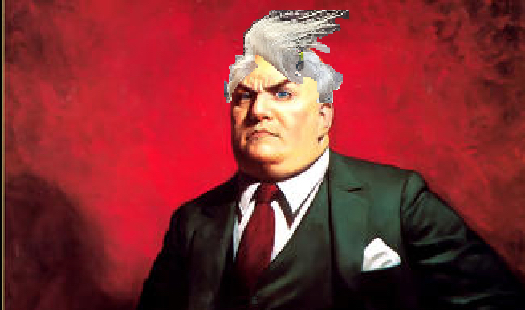 This being ComicMix, and you being a comics fan, I wouldn’t be surprised if you said it was Superman’s arch-enemy, Lex Luthor.

This being ComicMix, and you being a comics reader, I wouldn’t be surprised if you picked up on the interesting concept of life imitating art as you witnessed Barak Obama’s arch-enemy, Donald Trump, announce his candidacy for the office of the President of the United States on Tuesday, June 16, 2015.

Yesterday, out for a stroll with Alix, Jeff, and little Meyer, we browsed an outdoor celebration of Jersey City’s multi-cultural milieu, which included a terrific, mesmerizing, head-nodding, toe-tapping “Bollywood” dance performance by a professional Indian theatre group. What would “the Donald” say about that? Oh, wait, they weren’t Mexicans, so I guess they’re okay.

Anyway, continuing our stroll, we went to Jersey City’s greatest (and only) independent bookstore, The Word. While browsing the shelves, I picked up Neil Gaiman’s – and please don’t tell me that I have to remind you who Neil Gaiman is, this being ComicMix and you being a comics reader – new collection of short stories, Trigger Warnings: Short Fictions and Disturbances. Here’s some of what the New York Times had to say about it (and about Neil):

“One of the most enjoyable pieces of writing in Trigger Warning, which assembles a range of previously published material from the past seven or eight years, along with a new story that revisits the world of Gaiman’s best-selling novel American Gods, is the author’s introduction, delivered in the chatty, generous and digressive style familiar to readers of his blog. He supplies contextual anecdotes for every story or poem in the book, apologizes (unnecessarily) for its inherent shagginess and lack of thematic clarity, and expends rather too much effort explicating his title, a puckish reference to the Internet-spawned notion that all potentially provocative material should be flagged in advance, lest it engage latent trauma in its audience.

“I wonder, are fictions safe places?” Gaiman writes. “And then I ask myself, should they be safe places?” He means to suggest that his fiction may indeed prove disturbing and that we’re on our own, but that last part isn’t quite true. We have a guide. In practice, Gaiman’s writing answers the introduction’s questions both in the negative and in the affirmative. In his fictional worlds, reality is frequently subject to disturbing or hilarious slippage: A moonlight stroll in search of a defunct local attraction shifts without warning into a Shirley Jackson-style murderous ritual (“A Lunar Labyrinth”); a talkative woman in a small-town pub turns out to be a spectral jilted lover with a gruesome secret to reveal (in ‘Black Dog,’ a new adventure of Shadow Moon, the hero of American Gods); a teenage girl’s addiction to tanning lotion may result in the creation of a shimmering orange entity known as ‘Her Immanence,’ or to her sister as ‘the Great Oompa-Loompa.’ (That story, ‘Orange,’ is skillfully constructed as a litany of unsatisfying answers to official questions.)

One of the things I love about Neil is that he embraces his own fan sensibility and geekhood; Trigger Warning not only includes the afore-mentioned Oompa-Loopa, but also stories featuring Sherlock Holmes and Doctor Who.

I was also amused – well, I’m not sure if “amused” is the right word, unless it’s used in the ironic sense – to find G. Willow Wilson and Adrian Aphona’s Ms. Marvel series in the “Graphic Novels/Comics” section of the bookstore. I couldn’t help wondering if Kamala Khan, who lives in Jersey City, sometimes comes into The Word. (Um, that’s the “ironically amused” part.)

And I also couldn’t help wondering if “the Donald” would be okay with her. But she’s not a Mexican, so I guess he would be.