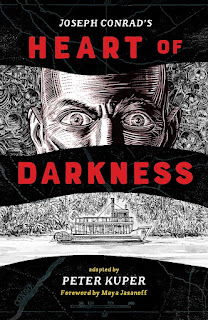 I’m not crazy about adaptations

, by disposition. I’d generally rather see new stuff in Creative Format X, rather than a Format X version of a story that worked well in Format Q.

I seem to be in a pretty small minority in that, though. The world demands movies from their comic books, TV shows from their novels, opera from their stories about historical figures, stage musicals assembled from random songs. And vice versa: look at the deeply incestuous “casting thread,” in which random observers squee over which actors in TV-shows-based-on-books should be their favorite characters in a potential movie-based-on-a-comic-book.

On the other hand, I don’t mind as much with old stuff. A new movie based on a Shakespeare play? Yeah, OK – that’s closer to the point to begin with. A graphic novel based on that hundred-year-old book everyone has heard of? Well, I suspect it’s because the publishers want to get in on that sweet, sweet adopted-by-a-million-school-systems money, but it’s closer to the original format, and might bring in new readers and…OK, why not?

That’s how I came to Peter Kuper’s adaptation of Joseph Conrad’s short novel Heart of Darkness , which has the usual quirkiness in its title common to adapted GNs. (It always reminds me of “Rod Torfulson’s Armada! Featuring Herman Menderchuck!” for a reference none of you will get.)

Kuper has a detailed, inky art style and goes in for fleshy, unpleasant faces a lot of the time, which are all strengths with this material. He also is adapting the story basically straight: it’s not transposed to the modern world and moved to another continent or “reversed” or anything like that. He even maintains the fussy frame-story element, though I’m unclear whether the benefits (believability, collegiality) of that ever outweighed the vast lost of immediacy.

Kuper’s introduction is about one-half process description and one half responding to Chinua Achebe’s mid-70s declaration that Heart is inherently racist and colonialist. Kuper disagrees with “inherently,” and emphasizes Conrad’s anti-colonialist credentials, but responding to that kind of criticism in his frontmatter tends to undermine the book. Remember: if you’re explaining, you’re losing. Kuper starts explaining, and explaining something he didn’t have to bring up in the first place, before the reader gets a chance to see the story itself. Afterwords, says Andy who is not actually the King of the World of Books despite his grandiose visions, is the place for material like that if you absolutely must include it.

Otherwise: this is Heart of Darkness. Marlowe goes upstream on a river the text does not name (but is clearly the Congo, and Kuper shows it as such on a map) in a continent equally unnamed (also put into clearer images by Kuper), first to be captain of a boat on that river but eventually to find the mysterious and central Mr. Kurtz. He tells this story to a group of others, including one who is officially our narrator, lounging on a boat in the estuary of another big river (the Thames) on another continent (Europe) that the text also pointedly does not name.

Kuper does his best to give the (entirely unnamed, mostly background) Black characters more stage business, agency, and importance here than exists in the raw text – this is their world, and the various fat, stupid, and greedy white people are invaders – but they’re not really part of Conrad’s story, so this is not always successful. They’re still scenery, even in Kuper’s version: there to make changes on white men, the ones worth telling stories about.

Achebe’s criticism is still valid: that’s what I’m saying. Kuper does what he can, and the story is not in favor of colonialism, but it’s still a hundred-year-old story by a white guy about another white guy going crazy from the jungle atmosphere.

But that’s Heart of Darkness. That’s the story. Kuper does a good job of retelling it

, of moving all those Black people at least closer to the center of the story, but it’s still about one relatively good white man thrown into a milieu of horrible white men and going through a transformative journey to find the one iconic white man who embodies the place.