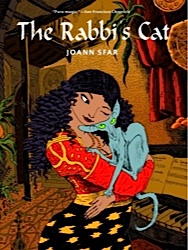 In my misspent youth I took French lessons and am able to get through Paris without causing International Incidents. My reading skills in French are better than my ability to speak it, and that’s okay: I like to think you get into less trouble with an open book than an open mouth. Little Did I Know.

So I’ve got this friend, brilliant fellow-writer Nalo Hopkinson, and one day she asked me if I could read French. Why yes; yes, I can, I replied. And I was thereupon treated to that rare phenomenon, the ability to hear via e-mail someone rubbing their hands together in fiendish glee and chortling “Mwahaha!” Soon after that, the mail brought to my innocent hands a French graphic novel called [[[Le Chat Du Rabin]]], aka The Rabbi’s Cat

. It was written by marvelously prolific French writer-artist Joan Sfar, and let’s get one thing out of the way now, FWIW: Joan is a man. It happens.

is set in 1930s French North Africa. I’m being typically lazy as I write this, which is why I’m fudging on exactly where in French North Africa. Morocco, I think. (Mmmmm, fudge!) The protagonist is—see if you can guess. . .YES! Right in one!—the rabbi’s cat. He looks to be related to the Sphinx breed and he dwells with the rabbi and the rabbi’s beautiful daughter.

And under the enchanting rules of Sfar’s fiction, in a miraculous moment, because he has eaten a talking parrot, the rabbi’s cat can now talk!