It was 75 Years Ago The Shadow hit the Comic Racks

Seventy-five years ago, The Shadow and Doc Savage made their four-color debut on January 21st, 1940 in SHADOW COMICS #1, which also featured the first comic book appearances of Nick Carter, Bill Barnes, Frank Merriwell, Iron Munro and a variety of other popular Street & Smith pulp characters.

With the possible exception of WALT DISNEY’S COMICS & STORIES, it is unlikely that any other comic magazine ever debuted with as many pre-proven famous characters. The Shadow had already starred in nearly 200 pulp novels and several films, while his weekly radio show had the highest audience ratings in daytime radio. Iron Munro was based on John W. Campbell’s novel THE MIGHTIEST MACHINE, one of the inspirations for Jerry Siegel’s SUPERMAN, and featured the exploits of a human born and raised under Jupiter’s high gravity who arrived on Earth to discover that his denser molecular structure gave him invulnerability, super strength and the ability to leap huge distances. Doc Savage’s monthly pulp magazine was reputed to have the highest per-issue circulation of any hero pulp, while Nick Carter and Frank Merriwell had been American icons going back to the Dime Novel era of the previous century. SHADOW #1 also featured adventures of CRIME BUSTERS’ distaff detective Carrie Cashin, the Air Trails Boys and famous Street & Smith dime novel properties including Diamond Dick and Horatio Alger’s Bob Burton and Mark the Match Boy.

In creating the earliest comic book superheroes, Superman’s Jerry Siegel and Joe Shuster, Batman’s Bob Kane and Bill Finger, Joe Simon, Jack Kirby, Stan Lee and Will Eisner took inspiration from the supermen of their own youth: legendary pulp heroes like The Shadow, Doc Savage, Zorro and The Whisperer. Bill Finger even acknowledged that his “first script was a take-off on a Shadow story” and that “I patterned my style of writing after The Shadow.” Bob Kane agreed, saying: “I suppose both The Shadow’s cloaked costume and double-identity role, as well as the extraordinary acrobatics of Douglas Fairbanks, Sr., did more to my subconscious to create the character and personality of Batman than any other factors.”

Though Street & Smith had pioneered the hero magazine genre with its SHADOW and DOC SAVAGE pulps, the nation’s largest publisher of pulp fiction magazines was slow to move into the rapidly expanding comics market, initially rejecting comics because it avoided publishing material that couldn’t be printed on its own Manhattan in-house presses.

In 1937, Shadow wordsmith Walter B. Gibson had attempted to interest Street & Smith in a Shadow comic book after noticing that the new comic strip reprint magazines were successfully competing for newsstand space with THE SHADOW MAGAZINE. When promotions manager William de Grouchy pointed out that the most popular newspaper strips had already been bought up by rival publishers, Gibson countered, “Why not get up some and sell them to syndicates and get the rights to use them in comic books?  And we should begin with The Shadow.” Unfortunately, the executive initially rejected Gibson’s suggestion which could have resulted in The Shadow and other Street & Smith characters debuting in comics ahead of Superman and Batman (whose first appearance in DETECTIVE COMICS #27 was an unauthorized adaptation of “Partners of Peril,” a 1936 Shadow pulp novel).

Despite this delay, SHADOW COMICS was still one of the first comic books to bear the name of its lead character, closely following on the heels of AMAZING MAN COMICS, FLASH COMICS and BLUE BEETLE COMICS, and preceded the first issue of BATMAN by several months. However, despite its title, SHADOW COMICS was actually an anthology comic featuring a wide range of characters, and had originally been planned as ASTOUNDING COMICS and advertised as STREET & SMITH COMICS, before being retitled SHADOW COMICS in the eleventh hour to tie in with the release of Columbia’s THE SHADOW movie serial.

SHADOW COMICS sold an average of 425,000 copies per issue in 1941 and continued for 101 issues, with its final issue appearing in 1949. The Doc Savage and Bill Barnes four-color features introduced in its first issue were soon promoted to headline their own comic anthologies, with DOC SAVAGE #1 debuting in April 1940 and BILL BARNES later that same year. Supersnipe (“the boy with the most comic books in America”) also debuted in SHADOW COMICS before moving on to its own successful comic book series.

Fifteen years after the Golden Age series ended, THE SHADOW was revived first by Archie’s Radio Comics imprint, and was later published by DC Comics, Dark Horse and Dynamite, and also appeared in a Marvel Comics graphic novel by Denny O’Neil and Michael Kaluta. The original Shadow and Doc Savage pulp novels are also currently being reissued by Sanctum Books trade paperback imprint. 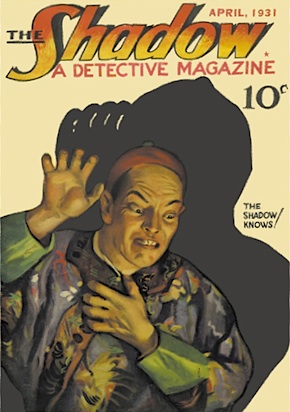 In the pages of The Shadow Magazine, magician-turned-journalist Walter B. Gibson refashioned the sinister narrator of CBS-Radio’s Detective Story Magazine Hour into fiction’s first Dark Hero, creating a crimebusting supersleuth who embodied the iconic power of classic melodrama villains like Dracula. Gibson’s novels introduced the concept of super-crooks and super-crime, and became the template for hero pulps and scores of future comic book superheroes, many of which were created by devoted readers of The Shadow Magazine including Jerry Siegel, Jack Kirby, Bill Finger and Bob Kane. In fact, the 1936 Shadow pulp novel “Partners of Peril” was adapted scene-by-scene and character-for-character, as the first Batman story in Detective Comics #27.

In honor of this anniversary, Sanctum Books has just reprinted “The Living Shadow,” the debut Shadow novel, and for the first time has restored the original text as it originally appeared in 1931 in the first issue of The Shadow Magazine. (The text was revised/updated when it was reprinted in a 1934 hardcover which became the source for future annual and paperback reprints.)

The Shadow Volume 47, reprinting “The Living Shadow” and “The Black Hush” with historical articles by Will Murray and Anthony Tollin, will arrive at comic book specialty shops on March 16th. 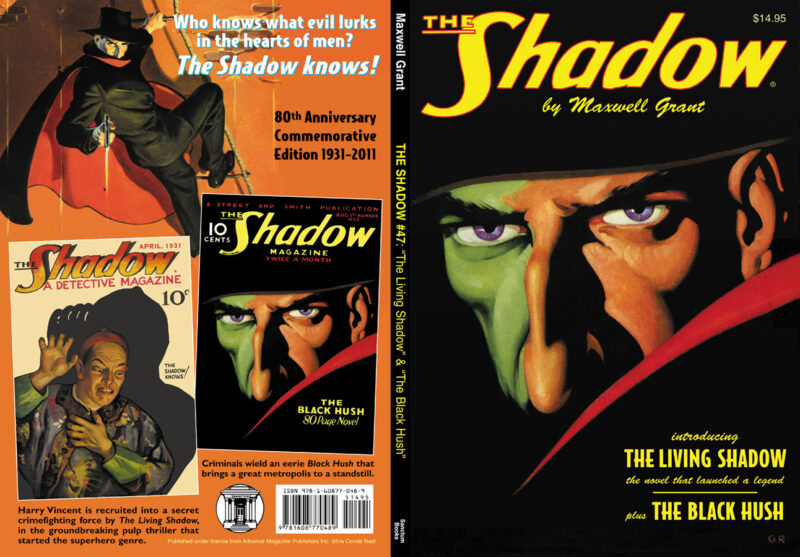 Adrienne Roy, whose colorful storytelling was a fixture throughout two decades of Batman and other best-selling DC comic books, lost a year-long battle with cancer on December 14th.

The premier DC Comics colorist during the “Bronze Age of Comics” provided dramatic coloring and storytelling for nearly all of the company’s top titles, but is best remembered for her 15-year, 189-issue run on Batman, her 16-year, 202-issue run on the company’s flagship Detective Comics, and a 14-year tenure on The New Teen Titans, plus many years coloring other Bat-titles including Brave and the Bold, Robin, Batman and the Outsiders, Gotham Knights and Shadow of the Bat.

Though her initial Bat assignments were for legendary editor Julius Schwartz, she was recruited to color the entire Batman line by editor (later DC president) Paul Levitz, who explains, “Adrienne combined the ability of a set designer to create beauty with the ability of a lighting designer to create drama and storytelling focus, and wrapped it in a sweet professionalism. No wonder we editors chose her again and again, keeping her on favorite titles like Batman literally for decades.”

The Verona, NJ native was a veteran of science fiction, comics, Star Trek and horror film conventions, and was one of the first female comics fans to break into the ranks of New York comics professionals. After marrying and moving to Manhattan, she briefly assisted her husband, DC Comics staffer Anthony Tollin, on his own freelance work before being recruited for solo assignments by vice president/production manager Jack Adler, who recognized by her third story that she would soon be “DC’s best colorist.” Under the tutelage of Adler and DC president Sol Harrison, Roy quickly moved into the ranks of DC’s top freelancers, with continuing assignments on a variety of titles including Superman, Green Lantern, All-Star Comics (featuring the Justice Society), G.I. Combat, House of Mystery and Batman Family. She was also the regular colorist on DC’s World’s Greatest Super-Heroes and Batman syndicated newspaper strips.

“For more than a decade, it seemed like Adrienne Roy was coloring virtually every DC comic,” recalls inker and comics historian Jim Amash, “but in truth she was only coloring most of the top sellers, the titles that everyone was reading!” Adrienne was the only DC freelancer with her own desk in the company’s Manhattan offices, and was the first colorist signed by DC to exclusive, multi-year employment contracts.