REVIEW: Batman: Soul of the Dragon

Batman was enjoying a renaissance as the 1970s dawned. Freed from its ties to the ABC series, editor Julius Schwartz worked with writers Frank Robins and Denny O’Neil on rejuvenating the Darknight Detective, returning him closer to his pulp-roots.

In short order, O’Neil would rise to become the premier Batman scribe of the era to be followed by a notable stretch as his editor from 1986 through the early 2000s. His impact is immeasurable. On the side, though, he aspired to be a prose writer as well and among his works from that period was a collaboration with cartoonist Jim Berry on the 1974 novel Kung Fu Master, Richard Dragon: Dragon’s Fists (1974) under the pseudonym “Jim Dennis.”

As the Martial Arts craze was beginning its descent, DC Comics optioned the novel and had O’Neil write and edit the adaptation as Richard Dragon, Kung-Fu Fighter. There, he introduced readers to Dragon, Ben Turner, O-Sensei, and most importantly, Lady Shiva.

All of the above explains why the latest DCAU release, Batman: Soul of the Dragon, is as much a celebration of that bygone era as it is a tribute to O’Neil. In this original story, now available on disc from Warner Home Entertainment, we have a reality where Bruce Wayne (David Giuntoli), training to become a hero, spends time in Nada Parbat. There, under O-Sensei’s (James Hong) guidance, he works alongside Dragon (Mark Dacascos), Turner (Michael Jai White), Shiva (Kelly Hu), Jade (Jamie Chung), and Rip Jagger (Chris Cox). 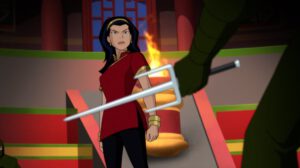 Each is there for a different reason, and while they train together, they’re not precisely close allies. Jagger betrays them all when he attempts to open the gates O-Sensei has been guarding, killing Jade in the process. The demon Nāga is nearly freed, and four of his servants escape until the O-Sensei sacrifices himself.

In time, each goes their way, with Wayne returning to Gotham City and donning the cape and cowl as Batman. When Dragon, now a spy, turns up in his penthouse, we discover that ancient evils are being stirred up, so it’s time to get the gang back together. Jeffrey Burr (Josh Keaton) is now the leader of the Kobra cult, determined to obtain the Soul Breaker from Shiva and free Nāga.

All the tropes from the martial arts films of the era are brought into play, from the music to the fight sequences, to the threat itself. Dragon here is redesigned from Caucasian to a stand-in for Bruce Lee, the clear master of the era. The film is a joy to watch, the action swift but not without letting the characters have their moments. Screenwriter Jeremy Adams does a superb job with this homage. 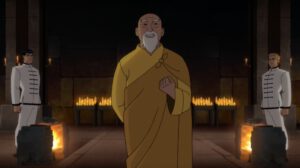 In the Batman: Raw Groove featurette, producer Bruce Timm discusses the notes from DC that their early drafts were too much Bruce Wayne and not enough Batman. That complaint still applies to the finished product. As he fights in costume, he stands out as an anomaly. Had Turner donned the Bronze Tiger mask, things might have felt more even-handed. Still, it’s just a quibble.

The 4k Ultra HD 2160p is pristine, capturing the colors and shades perfectly. The Blu-ray companion disc in the Combo Pack is equally good at retaining the palette and details. The DTS-HD 5.1 Master Audio is fine, if unexceptional.

There is just one original featurette here, but it packs some great material. Batman: Raw Groove (30:30) uses a pair of historians — Cal Lutheran history professor Dr. Michaela Crawford Reaves—to tee-up the context of the era, the rise of action films, and connecting the Blaxploitation and Martial Arts genres in ways I hadn’t previously considered. There is a good assortment of film clips from the Warner catalog to illustrate the points (although it should be noted, nary a clip of Lee, the father of it all, is present). Additional detail comes from Martial Arts History Museum President Michael Matsuda before filmmakers Timm, Jim Krieg, and others chime in.

Producer Jim Krieg’s Far Out Highlights (18:03) shows him at his 70s cheesiest, giving a far more personal perspective on the era and the resulting tribute film.

Sneak Peek – Justice Society: World War II (8:07) shows Krieg making his Walter Winchell impression as he introduces audiences to the first animated feature to spotlight the first team of heroes, apparently using the Silver Age Flash as the audience’s conduit to these bygone heroes. It looks to be fun.

Rounding out the Blu-ray disc is From the DC Vault (44:41) – Batman: The Animated Series: “Day of the Samurai” and “Night of the Ninja.”