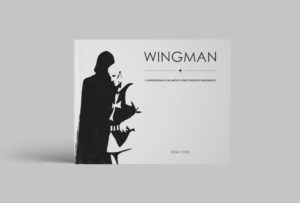 It takes a lot for a new publisher to get noticed these days and the challenge is to offer up something that hasn’t been seen before. New heroes? Check. New shared universe? Check. Variant covers? Check.

So, NextChapter—a graphic media publisher and distributor formed by and launching from The Great Company, arrives today with something unique. Veteran artist Sean Chen offers up their inaugural title, Wingman: Compendium of an Artist’s First Writing Experience, which showcases his artwork in addition to his first writing. The 9.5” x 12” 64-page softcover comes complete with Chen’s story and commentary on its creation and evolution.

One of the most interesting aspects is that the title will only be available on NextChapter’s website for 24-hours only, starting earlier today at 10:00 a.m. PDT. The storybook offers readers a look into Chen’s creative process, while random fans who purchase the book will also receive an autographed sketch from Chen, best known for his work at Valiant Comics and Marvel Comics.

In addition to the $28 softcover, 15 1-of-1 original drawings will be up for auction. The gallery will be powered by crypto vexels and hosted by crypto art community Machi X DAO, a member-directed organization where members pool resources and create proposals.

It’s an interesting gamble for the tyro writer but one he feels ready for. “I have never written for the majors, or anything really,” he told ComicMix in an exclusive interview. “I have an abiding love for great stories and always wanted to dabble in the process.  Regardless of having never formally written anything, as I matured, my sensibilities and knowledge of what makes good writing developed, so I did feel ready and confident that I could write on a level that had a decent chance of going over well.  If not, the project can function as art content for my Instagram, which needed to be fed almost daily.  I would know soon enough if the writing was connecting with people.  If it did, then I would entertain the possibility of bringing it out of Instagram to a larger audience in print.”

Interestingly, Chen, known for Iron Man and X*O Man of War, went back in time to feature the story of an old Knight from the Crusades, dying and reflecting on a full life.

“Before I ever wrote anything, the one thing I was sure of was that the genre would be a science fiction thriller. That had always been my genre of choice because it was very visual, action-packed, but also engaged the heavy thought-provoking literary aspects that you usually don’t find in superhero stories.  The biggest surprise for me was that it was not that at all.  Instead, it went toward iconic characters from vintage foreign films.

“Another aspect that was a shock for me was that it had so much comedy in it.  In fact, the story seems to defy all attempts to classify which I think is great because it’s a rare thing to get that feeling of being totally engrossed in a story and invested in the fate of the characters and not having a clue of what’s going to happen next.

“Also surprising was the revelation that as episodes of the comic were being released on my Instagram, readers were commenting very positively about the story.  They wanted to know how the story would end, while also not wanting it to end.  That was when I found out that I can actually bring something to the table as a writer!

“I think the genre I ended up exploring in Wingman was a reaction to drawing decades of superhero work from Marvel and DC.  Normally, super-hero or Sci-Fi would be the genre I would work in, but this first project I wanted to take a breather from the capes and spandex.  I think people who are familiar with my Marvel/DC work would see that Wingman has a completely different style.  I came across the iconic image of The Seventh Seal opening movie scene where The Knight and The Grim Reaper play a game of chess on a desolate craggy beach.  Because of the imagination of Ingmar Bergman and the cinematography that image hit me like a lightning bolt, and I felt compelled to draw it.  The dialogue was equally iconic, so I added a word balloon repeating what I had heard in the clip.  It all began from there and became a reimagined story set in modern time.”

Chen began the story for himself, posting it on his Instagram account in small batches. In time, “that allowed me to gauge reader’s reactions in the comments section and mine it for vital feedback. I used my followers as an important focus group.  The most important feedback I was looking for was whether the story was engaging and if the jokes were landing with the proper effect. Other factors such as pointing out plot holes, and lesser things like grammar and spelling.  Many changes and corrections were made based on this feedback on both writing and art.  So I did dedicate the book to ‘My Fine Followers on Instagram’ whom I consider to be Editor/Art Director.”

He partnered with NextChapter because he knew the startup’s publisher, Carl Choi, from Chen’s work in the advertising field. “When he approached me about releasing a print version of Wingman what sold me on his new company was that he envisioned an educational and outreach component.  His vision was to build a community that connected readers to creators that had the goal of showcasing what was possible in the medium of comics and to teach people how they can express themselves using the medium.  He required of me to create even more content in the form of commentary and educational matter that demystified how a comic is drawn, written and produced.  The first prong of his publishing plan was to use Instagram to debut the comic.  This allows readers to connect directly to the creator with feedback or questions. Then in the printed release, the creator commentary and process discussion is another great way to give readers insight into the creative process.”

The other challenge for him as a creator having the work presented in landscape rather than the traditional waterfall page orientation. He explained this was NextChapter’s creative decision, which he wholeheartedly supported.  “This was because it allowed for the large amount of commentary and educational text that was added in sidebars which gives readers insight into the creative process.  The biggest challenge to the format was that because the comic was meant for Instagram, it had to be readable on a mobile phone interface.  Lettering needed to be larger, so dialogue had to be succinct while still feeling natural.  The art also had to be readable at a small size while still allowing me to indulge in my usual meticulous inking style.,” he said.

As this release heralds a new chapter in Chen’s growth as a creator, he remains the monthly artist on DC’s Batman Beyond and he’s excited for its future, noting, “I am about to embark on the massively important issue #50!  Beyond that, I plan to do more writing and drawing stories.  Probably that Sci-Fi thriller that has always been brewing in the back of my mind.  Or really anything that strikes my fancy.  It’s a great time to create now as self-publishing is easier than ever, and outlets for comics material are plentiful.  It’s a powerful feeling to be able to draw and write my own stories at a time where fans will respond to individual creators passion instead of habitually looking to the big 2 for their typical comics fix.