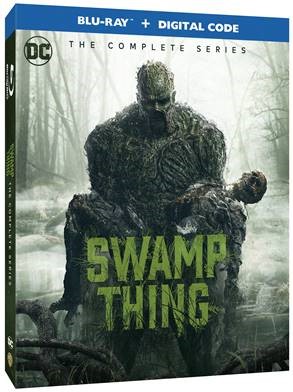 I was just the right age for Swamp Thing when he shambled into comics back in the early 1970s. I had years of super-heroes committed to memory so I was primed for something different. Along came Len Wein and Bernie Wrightson’s creation and it dealt nicely with familiar horror tropes but with enough of a twist to feel different along with continuing characters and exquisite artwork.

The arrival of Swamp Thing on DC Universe was equally well-timed in that we’ve had plenty of super-hero films and live-action television so it was a welcome addition to their initial lineup. Then came the news that there was trouble on the set, the series order was cut, then canceled after one ten-episode season. We were left with plenty of unfulfilled potential.

For those who missed out on the show, Warner Home Entertainment has released Swamp Thing the Complete Series in a fine Blu-ray package. I need to stipulate that one of the executive producers and writers of the show is Mark Verheiden, a long time friend so I am biased. Where I am not biased is in saying this is incredibly superior to the Wes Craven films and USA series from the 1990s.

The show takes its cues from the Wein/Wrightson stories but has totally reimagined the characters and settings, adding in other characters from across the DC Universe. Let’s start with Alec Holland (Andy Bean) as a disgraced scientist having worked for Avery Sunderland (Will Patton), who is a cross between Lex Luthor and Huey Long in this version. He and his wife Maria (Virginia Madsen) still mourn the loss of their teen daughter, harboring blame on Abby Arcane (Crystal Reed), who left town as a result. She now works for the CDC but when things go wonky in Marais, Louisiana comes home to investigate.

We have Holland becoming the Swamp Thing (Derek Mears), who is horrified at his transformation and slow to learn his abilities. His is being hunted, though, by Holland, who recruits Jason Woodrue (Kevin Durand), who subsequently becomes the Floronic Man, and Lucilla Cable (Jenifer Beals), the local top cop, and her son, Matt (Henderson Wade).

As much as this a horror/supernatural show, it is told through the prism of a soap opera with various entanglements complicating motivations and subsequent actions. Sometimes this provides for interesting drama, and other times is a distraction. Additionally, Nimue Inwudu, a.k.a. Madame Xanadu (Jeryl Prescott) is underused and Daniel Cassidy/Blue Devil (Ian Ziering) feels tacked on and his role may have suffered from the truncated episode order. We even get the Phantom Stranger (Macon Blair), who needed more to do.

Len Wiseman, from the Underworld franchise, and James Wan are among the executive producers and each brings their own approach to the storytelling, so we have plenty of gory, horrific set-pieces. The swamp setting and small rural town are nicely depicted and the shadows help with the mood. As a result, the 1080 dpi transfer was vital in capturing the colors and shades, and they do a fine job here, so you avoid getting lost in the muck.

All ten episodes are included with no special features, which is a disappointment, but the series is well worth watching for fans. It’s also reassuring all is not lost as we saw Swamp Thing both before and after the Arrowverse’s Crisis on Infinite Earths. One can hope we get a chance to revisit Earth-19.