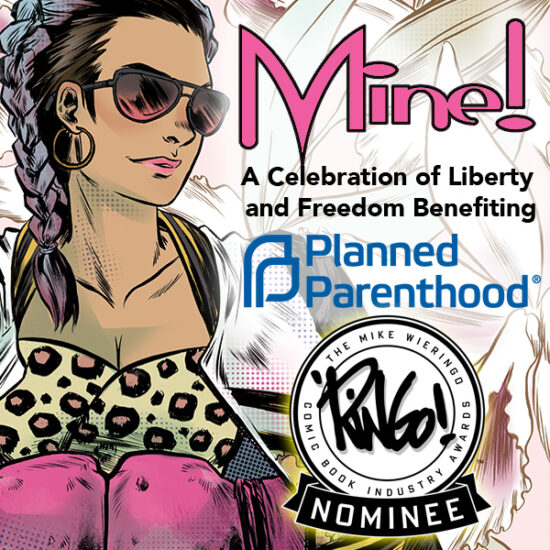 The 2018 Mike Wieringo Comic Book Industry Awards Nominees have been revealed, and we at ComicMix are proud to announce that Mine! A Celebration of Liberty and Freedom For All Benefiting Planned Parenthood has been nominated for Best Anthology. The awards are to be presented at the Ringo Awards Banquet and Ceremony in conjunction with the 2018 Baltimore Comic-Con on the evening of Saturday, September 29, 2018.

Voting on the 2018 Ringo Awards Final Ballot is now open, and is restricted to the comic book industry creative community — anyone involved in and credited with creating comics professionally. Final ballots can be submitted via their website, and voting will close on August 31, 2018.

The Ringo Awards are named for the late Mike Wieringo (June 24, 1963 – August 12, 2007), who often signed his work “Ringo”, an American comics artist best known for his work on DC Comics’ The Flash, Marvel Comics’ Fantastic Four, and his co-creation Tellos.

Mine! is available through Amazon, Barnes & Noble, Comixology,  comic shops everywhere, and directly from us. For retailers, the book has just been re-solicited through Diamond— use code JUL181745 and you’ll get your books when July orders close; if you need them immediately, use NOV171491 (Diamond will charge a restocking fee). Hardcovers are available via Ingram, 978-1939888662.

Congratulations to all the nominees! We look forward to seeing you in Baltimore.