REVIEW: Scooby-Doo! and Batman: The Brave and the Bold 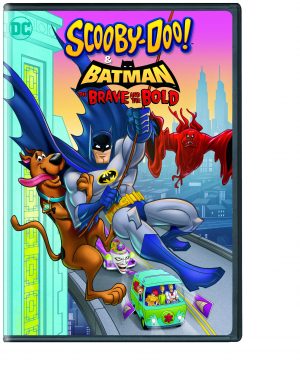 I wish I had a grandchild to enjoy Scooby-Doo! and Batman: The Brave and the Bold with since I am far from the target audience. I was outgrowing Saturday morning TV when Scooby and the gang debuted and never warmed up to them. Over time, the troublesome teens have encountered countless pop culture celebrities in their storied career but this, their fourth meeting with the Caped Crusader, is a record.

It makes perfect sense that the 1960s homage version of Batman (Diedrich Bader) is used here since it is stylistically appropriate for this sort of crossover. Paul Giacoppo acquits himself well with a breezy script that uses touchstone elements from both series so fans are satisfied. Comics aficionados will appreciate the use of the New Look era Mystery Analysts of Gotham, even though the novelists have been replaced by the more colorful Martian Manhunter (Nicholas Guest), Detective Chimp (Kevin Michael Richardson), the Black Canary (Grey Griffin), the Question (Jeffrey Coombs), and Plastic Man (Tom Kenny). It’s funny to see Aquaman (John DiMaggio) trying to be a member while the Scooby (Frank Welker) and the gang are tested for admittance.

Since these sorts of mashups require a major threat, it seemed right that Batman’s rogues cause the trouble so of course we get to see Catwoman (Nika Futterman), Riddler (John Michael Higgins), Penguin (Tom Kenny), Clayface (Kevin Michael Richardson), Harley Quinn, and Poison Ivy (both by Tara Strong).

The 75 minutes definitely feels padded but that’s to be expected given the limited range of the Scooby half of the match. Thankfully, the disc is rounded out with two classic episode from the New Scooby-Doo Movies:  “The Dynamic Scooby-Doo Affair” and “The Caped Crusader Caper”.