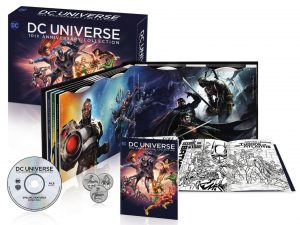 DC Comics and Warner Animation have every reason to celebrate their first decade of original feature film work. Since their inception, they have explored ways of adapting classic and current storylines to expand the audience for the heroes and villains that have existed on the four-color page. In time, they have experimented with styles, looks, and sounds, slowly but surely evolving into a shared universe of linked features so dedicated audiences can watch things progress.

The celebration is taking place in the just-released DC Universe Original Movies: 10th Anniversary Collection Blu-ray box set, which is limited to a numbered set of 20,000 units, priced at $299.99.

Overall, it’s handsome set with lovely cover artwork and nice interior design. Clearly aimed at collectors, it ranks up there with some of the other anniversary box sets from elsewhere in the digital universe. Obviously, the films vary in quality and not all is to individual taste, but together they are a testament to the characters’ adaptable quality, able to be interpreted and reinterpreted by a wide range of talents. 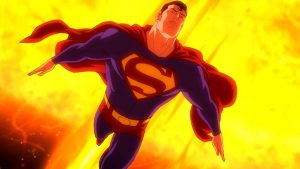 On the bonus disc, there should be something about the decade itself, some roundtable of creators, animators and voice actors looking back. It feels like a gaping absence. Instead, we start with a 49-minute “The Super Human in Us All” which is meant to be an inspiring look at real-world heroes, individuals who have committed selfless acts to help others. Some have used those moments to launch new careers and they are justifiably celebrated, but it is an oh-so-serious, ponderous production, intermixing way too much Alex Ross artwork to connect DC’s heroes with these admirable humans that it proves more self-important than inspiring.

The hosts from DC All-Access take us through a cursory “Comic Book History of Justice League Dark”, leaving out key details. Considering they appear in just one of the films with no announced plans for more, it is a curiosity.

Far better is “Mark Hamill: Finding The Laugh”, as the actor traces his career from Star Wars to his 20-plus year career voicing the Clown Prince of Crime. He acknowledges those who brought their own take as found on several films in this set and walks us through his thought process in finding his voice and sustaining it as the content has grown darker, notably the video games. 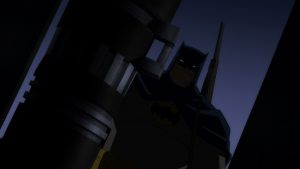 Panel Discussion – A Tribute to Darwyn Cooke is another celebration of the artist and animator who left us too early but did give us many wonderful projects so deserves the look back.

There are three brief pieces drawn from the JLA: Gods & Monsters film, featuring variant takes on the trinity. 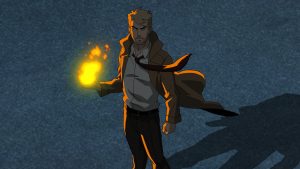 Also included: SUPERMAN/SHAZAM! The Return of Black Adam, along with The Spectre, Green Arrow, Jonah Hex, and Catwoman shorts.