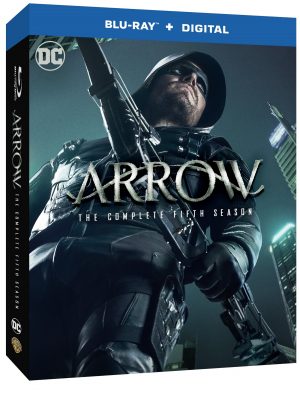 All along, showrunners Marc Guggenheim and Wendy Mericle have been telling us Arrow was seen as a five-year odyssey, intended to be the same amount of time post-Lian Yu, to show how he has grown since being stranded there. Other than that noble notion, the execution has been incredibly uneven season to season.

As the series entered its fifth year, they began the season uncertain if this was going to be its final one so they made certain things got tidied up. The tedious flashbacks had to wrap up the five years before the series’ start and move Oliver Queen (Stephen Amell) and his friends towards a point where, should it be canceled, viewers were left satisfied.

Somewhere during the production of the final nine episodes, they got a sixth season renewal so shifted the planning to bring things to a climax and a cliffhanger. The messy 23 episodes are now collected by Warner Home Entertainment in Arrow: The Complete Fifth Season.

Oliver Queen’s story was one of redemption and responsibility wrapped around his family. Along the way it has taken interesting twists and turns and this year it was clear the intent was to get back to the street-level threats that propelled the Hood, the Arrow, and Green Arrow to protect Starling, now Star, City. As a result, it was an odd monkey-wrench tossed in when the series had to acknowledge the existence of aliens among us with its participation in the four-part crossover. The planning was haphazard since the episode had to double as a celebration of its 100th episode and therefore focused more on that than the crossover, spoiling the impact it should have had.

Oliver realizes there is so much to do, as both the Arrow and as Mayor, that he needs a team now that Diggle (David Ramsey) is in prison and Speedy (Willa Holland) has had her fill of costumed adventure. Slowly, and reluctantly, he rebuilds with the addition of Wild Dog (Rick Gonzalez), Artemis (Madison McLaughlin), Ragman (Joe Dinicol), and Mister Terrific (Echo Kellum). Later, detective Dinah Drake (Juliana Harkavy) uses her sonic powers to join the team as the future Black Canary III. These newcomers offer a breath of fresh air to the series’ dynamic, especially as they are trained and then sent out to fight, not entirely agreeing with the hows. Artemis’ betrayal is a surprise but she’s off-stage for so long that when she turns up as Prometheus’ sidekick, we wonder where she’s been. Her arc deserved better since the betrayal is important. 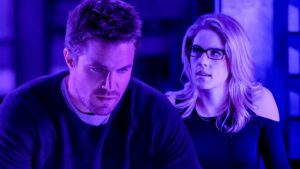 Picking up from the Olicity breakup at the end of season four, the season’s best episode may have been “Underneath”, which focused mainly on Ollie and Felicity (Emily Bett Rickards), allowing them to air out their emotions showing more can be done with less – a lesson I wish all the CW series would learn.

Instead, Prometheus (voiced by Michael Dorn) is the Big Bad, the son of someone Arrow killed way back in season one and has spent the last four years not only training himself to be the hero’s physical equal but to be psychologically ahead of his target. Throughout the season he takes out the people around Ollie until he gets Ollie himself and forces him to look deep inside himself to confront some harsh truths.

The problem with Adrian Chase (Josh Segarra) as Prometheus is that he’s too smart, too sophisticated and accomplishes way more than he should be capable of. He’s too perfect of a villain to be a true threat and I reached my limit when he produced Ollie’s secret son William (Jack Moore). 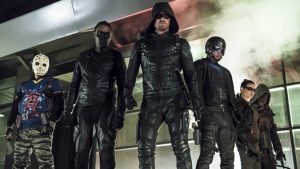 Muddying the storyline are threads that never went anywhere such as Ollie’s sort of romance with journalist Susan Williams (Carly Pope), and the periodic appearance of Vigilante, who in the comics is Chase, so makes us wonder who this one is.

And with such a sprawling cast, Quentin Lance (Paul Blackthorne) doesn’t get enough screen time but what he does get, is usually as a foil to Wild Dog – their dynamic is at least a fresh one. Holland’s coming and going from the series was never adequately covered so her character is under-served and deserves far better.

Personally, I felt Ollie never should have left the island and the flashbacks should have ended about three seasons earlier. That said, I am fine the Russian thread got dealt with and we can move forward. 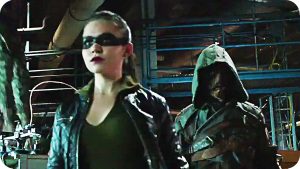 The climax, set where it all began, on the island, brings everyone to one place then doesn’t do anywhere enough with them, including Talia al Ghul (Lexa Doig) , who felt more tacked on that useful. As it stands, the past has been figuratively and literally destroyed in the final episode so truly, the new season next month can finally move forward.

The 23 episodes come complete with a series of related deleted scenes and the ever-popular Gag Reel. We get the third installment of Allied: The Invasion Complex, this one focusing on using the alien tech to let the Arrow characters see alternate histories, which reset Oliver’s goals for the remainder of the season. There are two other featurettes: The New Team Arrow where the production team talk about how the new team members were selected, designed to be fresh and allow the writers to change-up the character interplays; and Returning to the Roots of Arrow: Prometheus, examining how the series unintentionally set this up and how it got to be paid off (without really discussing the comic book origins of Prometheus or Adrian Chase).