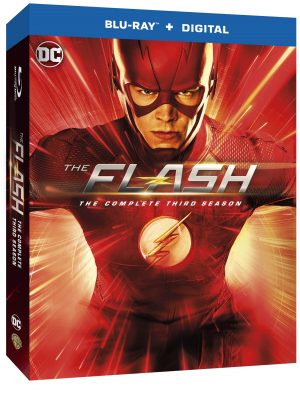 After two seasons of relentlessly grim Arrow, we all welcomed Flash with open arms, rejoicing in its optimism and joy. Sure, there were some quibbles and wobbles, but it was still eminently entertaining with an appealing cast.

Then came season three. I do not understand DC’s fixation with Flashpoint, a miniseries that really doesn’t hold up to examination and was not only the cornerstone for this misfire of a season but will also be felt in the first Flash feature film. The repercussions of Barry’s rash decision at the end of season two, to race back in time and save his mother’s life, had substantial impact on his life and those of others in his world. Then, when he tried to fix it, other changes happened and he spent most of the season moping.

Flash: The Complete Third Season, out this week from Warner Home Entertainment, was an unhappy slog through muddled storylines and soap opera elements with bright bursts of hope things would get better.

In comics, Savitar was a serious threat to the Speed Force and all speedsters, but here, he was revealed to be a grumpy older Barry (Grant Gustin) stuck in a suit of armor that didn’t make a lot of sense. The drawn out thread was so badly handled the producers have publically regretted they didn’t plan it out better. No kidding.

They have also fallen into the bad trap of the characters always lying to one another to “protect” them or some other noble claptrap. Let them be honest and handle the fallout. No wonder Team Flash has trust issues – and they’re the good guys.

While people have rightly complained the Big Bads are always speedsters, the show is getting rather full of fleet-footed heroes, too. With Flash, Kid Flash (Keiynan Lonsdale), Jesse Quick (Violett Beane), and Jay Garrick (John Wesley Shipp), it’s a bit much when trying to keep the focus on the title character. 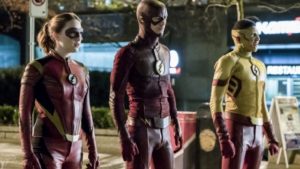 The idea of different Harrison Wells (Tom Cavanagh) coming to Earth-1 from across the multiverse is interesting once or twice, but I think enough is enough. Either stick with one or send him home.

So, instead, let’s focus on the better elements such as how well handled this series’ installment of the four-part (really two-part) “Invasion!” crossover was or how delightful the musical crossover with Supergirl was. The Barry/Iris (Candace Patton) romance simmered well as was Joe West’s (Jesse L. Martin) new romance with Cecile (Danielle Nicolet). HG’s nascent romance with Anne Dudak’s scientist was interesting but she was never fully integrated into the Team, which I thought was a shame.

From the beginning we knew Caitlin (Danielle Panabaker) was doomed to become Killer Frost and had hints of it previously, but her permanent change was another well-handled bit of business, especially as she was falling for Julian Albert (Tom Felton). It was also interesting to see Cisco (Carlos Valdes) grow into his Vibe powers and his scenes with would-be paramour Gypsy (Jessica Camacho) were always fun. 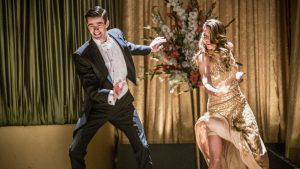 And Flash in comics or TV has been about the fun, the joy of being a hero. He enjoys one of the best collection of villains in all comicdom and it’s good to see so many make it to the screen – it’d be nice if they were better developed, but who can complain about Flash vs. Grodd in an arena full of gorillas? More please.

“Finish Line” closed the season with Flash entering the Speed Force because, for reasons beyond comprehension, a speedster must always live there. Don’t worry, we all know he’s coming back and the producers hope it’s in some heroic manner but really, in October, get things rolling without dithering.

The Blu-ray set contains four discs with all twenty-three episodes, most coming with deleted scenes of varying length and importance. Additionally, there are numerous special features, mostly on the final disc but they are scattered. We have the The Flash: 2016 Comic-Con Panel, a bunch of talking heads trying to explain A Flash in Time: Time Travel in the Flash Universe, a look at Villain School: The Flash Rogues, one-part of Allied: The Invasion Complex (continued, of course, on the Arrow set); a look at the construction wonders in Rise of Gorilla City; A Conversation with Andrew Kreisberg and Kevin Smith, and a Gag Reel. Of special note is the four featurettes focusing on the series music and the musical episode in particular.  The Flash: I’m Your Super Friend, The Flash: Hitting the Fast Note, Harmony in a Flash, and Synchronicity in a Flash are really interesting, a rare look at scoring a weekly show.