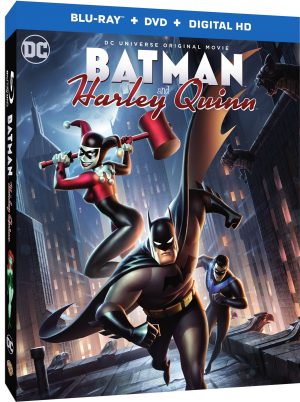 Warner Animation’s just-released Batman and Harley Quinn is an interesting project from the standpoint of it being a more mature sequel to the Batman: The Animated Series while still fitting into the now cohesive DC Animated Universe. It has the look and feel of the classic series while the content and themes are vastly different in keeping with Harley’s prominence in all-things DC these days along with upping the stakes in a longer production.

That said, the production is very entertaining and a welcome 30th film in the line of animated projects (the DC Universe: 10th Anniversary Collection is expected in November).

It’s a lot of fun to have Bruce Timm, Harley’s co-creator back in action as a co-scriptwriter. Sam Liu is also back to direct so we have a lot of veteran talent to bring tremendous affection to the project and it shows in every detail.

Poison Ivy (Paget Brewster) has been connected with Jason Woodrue, the extra-dimensional Floronic Man (Kevin Michael Richardson), ever since Neil Gaiman put them in the same class in Black Orchid. Here, though, we think Ivy is out to save the world from man’s ecological folly but we get a larger, nastier, and more in control Floronic Man than we’ve seen in comics or animation. He’s out to make the world a verdant paradise, as long as he’s in charge.

They are after Alec Holland’s bio-restorative formula, the one that turned him into the Swamp Thing, and once they begin not-so-subtly robbing places to obtain it, this alerts Batman (Kevin Conroy) and Nightwing (Loren Lester). To find Ivy, they turn to her long-time gal pal, Harley Quinn (Melissa Rauch) who is now out of jail and off the grid. When Nightwing tracks her down, we find her in costume, but waitressing at Superbabes, a super-hero themed restaurant (those wall decorations were a set of decals DC sold back in the ‘70s, a lovely touch).

To convince Harley to help them, the pair fight and, in an interesting turn, wind up sleeping together, only to be found by Batman. 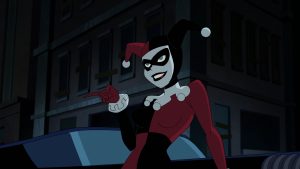 From there, the chase is on, leading them all to Louisiana where the film’s extended climax occurs. Along the way, they look for clues in a bar that features a motley assortment of thugs dancing to twins performing, which is amusing, but when Harley has to sing, we get her full song and then a fight, prolonging what should have been a far shorter sequence.

There are loads of asides, gags, and tips of the cowl to other incarnations of Batman and the heroes so pay attention. This is where Timm tends to excel, never taking his eye off telling a strong story. And yes, despite some plot drag in the middle, the themes are very strong here. We do get a totally extraneous appearance by Swamp Thing, although they avoided making him a deus ex machina. Still, the story sort of just runs out of steam rather than neatly tie things up. Do stay for the post-credits sequences which are just a hoot.

It is a real pleasure to hear Conroy and Lester together again and it’s all the more a shame Arlene Sorkin, Harley’s original voice, is absent from the reunion. Rauch is good, but her Bernadette bleeds through now and then. 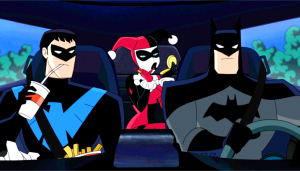 Parents should be aware this is rated PG-13 for “sexual references” and “rude humor”, mostly in the form of Harley’s words and deeds – but really, did you expect any less?

The movie is available in a variety of formats including the 4k Ultra HD/Blu-ray/Digital HD and the collector’s set with a Harley figure. Word is, the 4K and Blu-ray are almost indistinguishable and the 1080p, AVC-encoded version is just lovely and well matched with the lossless DTS-HD MA 5.1 soundtrack, featuring a top-notch score from Kristopher Carter, Michael McCuistion and Lolita Ritmanis.

The Blu-ray comes with the usual assortment of Special Features, starting with A Sneak Peak at DC Universe’s Next Animated Movie (8:30), which is Batman: Gotham by Gaslight. I frankly am offended so much credit goes to Mike Mignola without author Brian Augustyn’s name being mentioned – and quite a bit of the art from the comics is actually from the Ed Barreto-drawn sequel.

There is also The Harley Effect (21:15), where her co-creators, Bruce Timm and Paul Dini, discuss her origins and slow-building popularity until she is now one of DC’s most ubiquitous characters (effectively their version of Deadpool, put her on anything and it’ll sell); and, Loren Lester: In His Own Voice (11:46), talks returning to the role that made his voiceover career. We get the Sneak Peaks to Batman: The Dark Knight Returns, Part I and II and Batman: Assault on Arkham. From the DC Comics Vault offers two well-chosen selections: Batman: The Animated Series, “Harley and Ivy” (22:23) and “Harley’s Holiday” (21:15).