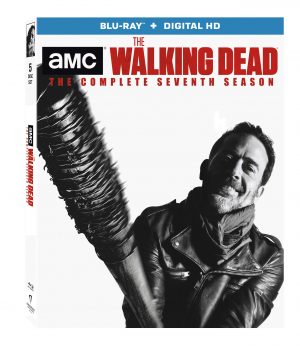 SANTA MONICA, CA (July 28, 2017) – The dead aren’t the only things to fear when The Walking Dead” The Complete Seventh Season arrives on Blu-ray (plus Digital HD) and DVD August 22 from Lionsgate and Anchor Bay Entertainment. Rick Grimes and his hardened band of survivors face their greatest challenge yet in Negan, the volatile leader of an opposing group. The Walking Dead” The Complete Seventh Season stars Andrew Lincoln (Love Actually), Norman Reedus (Boondock Saints franchise), Lauren Cohan (The Boy), Danai Gurira (All Eyez On Me), and Jeffrey Dean Morgan (Magic City).

Picking up immediately after the thrilling cliff-hanger, Negan forces Rick and the group to fall under his will, brutally convincing them to live by his rules. To prevent further bloodshed, Rick genuinely believes they can make life under Negan, however terrible, work. But he soon learns that Negan can’t be reasoned with, and they must prepare to go to war now. Victory will require more than Alexandria, and Rick will need to convince their new allies from the Kingdom and Hilltop to band together with the common goal of taking down Negan and his army.