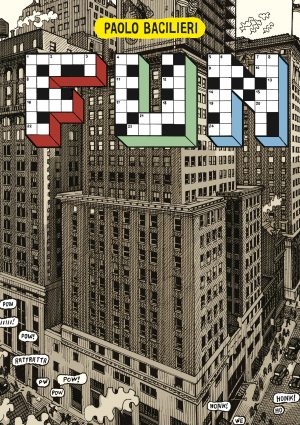 Life is never perfectly sequential, with one event cleanly leading to another. There are interruptions, asides, flashbacks, diversions, and the like. In some ways, it is not dissimilar to the crossword with its black spots, horizontal and vertical intersections, and clues that are either easy or confoundingly complex.

Turned into a graphic novel, it would resemble something close to Paolo Bacilieri’s Fun. The work is his American debut although the 52-year old creator from Milan has a large European following. This ambitious work is an interesting but flawed volume for all the reasons above.

Ostensibly about Professor Pippo Quester, an Italian celebrity novelist, and his work-in-progress, a history of the crossword puzzle, it is about so much more. The linear and most “American” aspects of the work are all the sections about Quester and his meticulous tracing of the crossword, introduced in the New York World, in 1913 and how it quickly spread around the globe by World War II. Along the way, we get snapshots of the key creators of the daily puzzles from its inventor, Arthur Wynne, through the Italian Giorgio Sisini.

When Quester seeks someone to do additional research, he turns to his former colleague, Zeno Porno, a Disney comics writer. Apparently Zeno is a recurring player in Bacilieri’s work and is seen as the artist’s alter ego. Either way, he seems a sad, almost pathetic figure, who is also never seen actually working. It is through Zeno we get many tangential anecdotes and stories that spin off from the book’s axis. One such digression focuses on Spider-Man foe Hammerhead (properly crediting it to Gerry Conway and John Romita) and leaves you (and Quester) confused. Some of these are done in color while the remainder of the book is in black and white—make of that what you will.

Things turn tragic, though, when young Mafalda Citicillo stalks the pair and shoots them. As Quester recovers, Zeno tracks her down once she’s out of prison to ask the big question: why? Her response sends him close-reading one of Quester’s previous novels in search of answers that do not come easily. In fact, once the reader is told the answer, it is almost immediately undermined leaving readers to wonder where the truth lay.

Originally published as two volumes – Fun and More Fun – they are presented to American readers on one thick volume which makes for a more satisfying experience. Bacilieri worked on this between 2009 and 2014 based on his occasional signature and the artwork itself is exquisite, detailed illustrations that bring different eras and locales to life. His pages are filled with things to look at and while I can quibble with some of the word balloon placement, the page design and storytelling is varied and never dull.

We’re more accustomed to stories with a clear beginning, middle, and ending so some of the narrative ambiguity undercuts the novel’s strength but there is still plenty to like here. I suspect the core story, on its own, would not have been anywhere near as interesting.