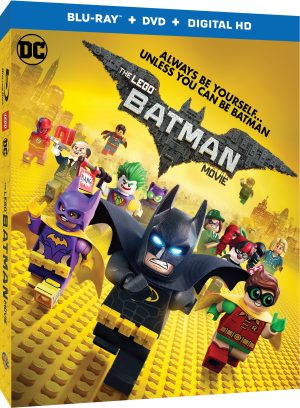 I fondly recall the purity of Lego, refusing to license media properties, preferring to keep their toys pristine and unique. Eventually, the opportunity for expanding their line was too tempting and they introduce first one, then another, and now a flood of media properties to their toys allowing you build everything from the Batcave to the Black Pearl. It was only a matter of time before they migrated from the playroom to the computer screen in a series of games that morphed into direct-to-DVD features. And now we have a whole subset of children’s films featuring the Lego version of popular heroes and villains.

One reason this explosion has been sustained is that the producers and writers have been freed to go wild, tongues firmly in cheeks, offering kinetic mayhem for the younger viewers and tons of pop culture references for the parents forced to endure repeated viewings. No doubt inspired by the Zucker Brothers’ Airplane!, these films apparently are a delight.

I wouldn’t know because until recently, I have never really paid attention to one. When The Lego Batman Movie landed on my doorstep, I was intrigued because the 2017 release was a well-reviewed, box office success. Parents of the tiny tot brigade told me it was really fun so I indulged.

I watched and was largely entertained in this film from writers Seth Grahame-Smith, Chris McKenna, Erik Sommers, Jared Stern and John Whittington, and director Chris McKay. The main reason is that it focused on the less desirable parts of Batman’s persona amped up in a way to make it appear truly unpleasant. We open with Batman (Will Arnett) single-handedly saving Gotham City (again) from a mob go costumed criminals led by the Joker (Zach Galifianakis). Once the adulation fades away, he returns to Wayne Manor on Wayne Island (where’d that come from?) alone. After eating by himself, he watches Jerry Maguire, one of a ton of relationship films he uses to mask his pain.  His isolation from friends, family, and foes is magnified here, even refusing to acknowledge having any connection with his polar opposite, the Clown Prince of Crime, telling him, “I don’t ‘ship.”

Alone and lonely, he finds himself pushed and shoved into interacting with others by Alfred (Ralph Finnes) at Commissioner Gordon’s retirement party, where daughter Barbara (Rosario Dawson) is introduced as the new police chief. Bruce is so smitten with her that he absently agrees to adopt an orphan, Dick Grayson (Michael Cera).

Meanwhile, the Joker apparently wanted to be imprisoned as part of his latest mad scheme to destroy Gotham and make Batman notice him. For reason that don’t really make a lot of sense, Batman decides the Joker and his ilk, need to go to the Phantom Zone and he brings along his youthful ward, now dressed as Robin despite a lack of training. There, he sees the JLA (complete with the Kenner-only heroes) having a party without him, cementing the sense of isolation.

The Joker goes to the Zone where he recruits Voldemort, the Eye of Sauron, the Daleks, King Kong, the Gremlins, a faux-Godzilla, and others to help him wreck Earth. He does, Batman pays a price for his distance, recognizes he can’t possibly do his job alone and grudgingly comes to accept he needs allies; more he needs family. Alfred is hilariously attired in the Batman outfit from the 19 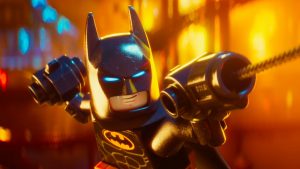 60s and Babs debuts as Batgirl for the climactic battle.

The themes owe tons to the comics but the continuity is an illogical thing unto itself, undermining the connections to the source material and possibly creating a confusing entry point for future comics readers. Name a Batmobile, and you will see it somewhere in this film. Heck, even the reviled Bat-Shark Repellent becomes a plot device. I laughed out loud at the secret password to enter the Batcave and the Fortress of Solitude’s door chime.

For the adults and comic aficionados, though, the film is chockablock full of references, both verbal and visual, to tons of comic lore including references to every film, cartoon, and comic incarnation of the Dark Knight.

There are so many villains, gadgets, vehicles, and the like that it can be a bit overwhelming, no doubt demanding repeated watching just to identify everyone and everything. As a result, a topnotch vocal cast – Jenny Slate, Hector Elizondo, Mariah Carey, Eddie Izzard, Seth Green, Billy Dee Williams (once more as Harvey Dent), Conan O’Brien, Zoë Kravitz, Kate Micucci, Channing Tatum, Ellie Kemper,  Jonah Hill, Adam DeVine, and even Brent Musberger — is mostly wasted since they barely do anything other than grunt or say something innocuous. I do appreciate Siri being cast as the Batcomputer, though.

The Combo Pack comes with the Blu-ray, DVD, and Digital HD code along with a handful of special features. Notably, there are four short shorts that are more silly than entertaining, four deleted scenes that were thankfully left unused, and six featurettes that cover aspects of the Lego world and film production.