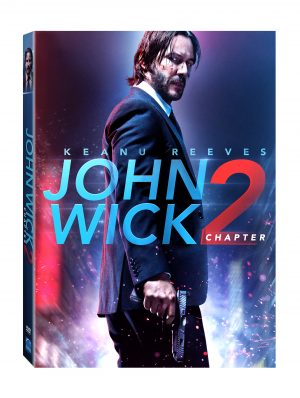 We’ve seen one man versus an army and a man who wants to retire only to be dragged back to the fight. It’s a staple of storytelling and modern cinema so it all comes to down the execution. In fall 2014, audiences were introduced to the latest character in this celebrated model: John Wick. A surprise hit for Lionsgate, it was fairly quickly decided to make a sequel, hoping to turn this into a series which can be a challenge when the main character just wants to be left alone.

In January, Wick’s return came with John Wick Chapter 2 which offered more of the same high-octane stunts, fights, shooting, punching, and martial arts. With a stoic performance from Keanu Reeves we find ourselves rooting for the antihero as the relentless pace is sustained over two hours.

Out now from Lionsgate Home Entertainment, the film can be seen on Digital HD, 4K Ultra HD Combo Pack, Blu-ray Combo Pack, and DVD. Any way you watch it, screenwriter Derek Kolstad and director Chad Stahelski raise the stakes and expand Wick’s world. And for me, it is this expanded look at the world of contract killers that is the most interesting aspect.

There are rules and codes these men follow and for Stahelski, this means honoring the influential spaghetti Westerns, notably The Good, the Bad and the Ugly, Point Blank, Le Cercle Rouge, and The Killer. Wick is a man in mourning for his dead wife Helen (Bridget Moynahan) and he wants out of the business. In the first installment, he does this by slaughtering men in a single night, earning his freedom. However, there’s still the matter of his stolen car and here we open four days later as he arrives to retrieve it from the Russian mob, now led by Abram Tarasov (Peter Stormare), Viggo’s brother, Iosef’s uncle.

We also learn that to accomplish his impossible task, he received help from Santino D’Antonio (Riccardo Scamarcio), a powerful Italian crime lord, who shows up to call in his marker. When Wick refuses, Santino blows up his house, forcing Wick back to work, which is to kill Santino’s sister, Gianna D’Antonio (Claudia Gerini), so he can assume control of the New York arm of his family’s criminal operation.

By far, my favorite parts of the story are set in the Continental, the Old World, old school hotel run by Winston (Ian McShane), a neutral hub for the underworld. When Wick arrives to be tailored and equipped it is a lovely satire of such a locale. There are rules and codes of conduct that are so timeless that we see switchboard operators and pneumatic tubes do the back office work.

There are some interesting characters opposing Wick along the way, notably Common’s Cassian, Gianna’s bodyguard, and Ruby Rose as the mute Ares, Santino’s enforcer. In both cases, I wish we had more with them beyond the endless fights. As with all such films, Wick and his opponents are incredibly accurate until the choreography says they’re not, amping up the implausibility of the action, which is required otherwise the film would be one-third the length.

After defeating them, there is $7 million contract on Wick’s life (up from the first film’s $2 million) and it feels like everyone in Manhattan is a freelance assassin as everyone hunts him. Clearly his rep as the Boogeyman scares off none of them. His reprieve comes in the unlikely form of the Bowery King (Laurence Fishburne), who has his own underground homeless world to rule.

Clearly, plenty has been established to sustain Wick’s exploits for several more films although the urge to top the previous effort may push the series to ridiculous lengths and one hopes Kolstad, Stahelski, and Reeves temper that.

The Blu-ray edition’s 1080p high definition 16×9 Widescreen 2.40:1 is terrific, letting you follow the action in the gloom of night or fluorescent brightness of the subway system. The Dolby Atmos soundtrack is an equal match making for a good home experience.

There are plenty of special features starting with Deleted Scenes, including one with John Leguizamo, that should have been retained. “RetroWick: Exploring the Unexpected Success of John Wick” looks at how surprised everyone was when the first film clicked with audiences around the world;  “Training John Wick”; “WICK-vizzed”; “Friends, Confidantes: The Keanu/Chad Partnership”, which can also be heard with the film’s Audio Commentary; “As Above, So Below: The Underworld of John Wick” Fear”; “Car Fu Ride-Along”; “Chamber Deck: Evolution of a Fight Scene”; “Wick’s Toolbox”; “Kill Count”;, and my favorite, the Dog Wick Short, a trailer for a spin-off that has to be seen.