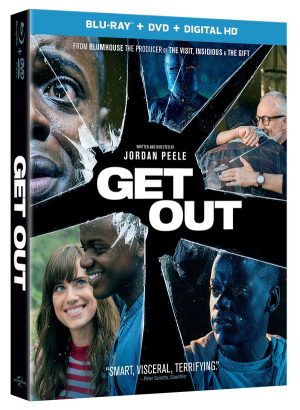 The trailer for Get Out intrigued me but ultimately I chose not to see it in the theater because it seemed a bit more of a thriller than I desired. But then lots of people I knew were recommending it, as were the critics. I was impressed by the 99% fresh Rotten Tomatoes score so when the opportunity came to review the film on disc, I decided to give it a shot.

I have never seen anything Jordan Peele has done but appreciate his work here as both writer and director. The film’s first two-thirds are very strong as everything appears idyllically normal with a loving, upper crust family welcoming the daughter’s boyfriend for a weekend visit. But, in many, many subtle ways, there’s also something very unnerving just below the surface. The house too perfect (despite the “black mold” in the basement), the dad just a tad too accommodating, and the maid a might too subservient.

Increasingly, things feel “off” and you get an unsettling feeling without fully knowing what is happening. Is it supernatural in nature? Is it white supremacy gone off the deep end? You get the clues slowly and by the time you figure it out, the film goes off the rails and devolves into standard horror fare, undercutting and spoiling the marvelous tone Peele established.

The movie stars Daniel Kaluuya as Chris Washington, a well-balanced, loving black boyfriend to Rose Armitage (Allison Williams). She has not told her parents, Dean (Bradley Whtiford) and Missy (Catherine Keener), that she has been dating a black man, which at first feels remarkably modern but is actually the first warning sign. The first real sign that not everything is right comes with the arrival of Rose’s brother Jeremy (Caleb Landry Jones).

At the party the following day, the various friends seem particularly taken with Chris, who grins and bares it, while people recreate that uneasy feeling I first got when I watched Mandingo, checking him out. And that’s when the racist themes really get an airing in a nice variety of exchanges. But what about the maid Georgina (Betty Gabriel) and the handyman Walter (Marcus Henderson)? They’re the only other black people on hand and neither one seems welcoming; in fact, it’s the opposite. That raises new questions.

Chris shares his concerns with his pal, TSA Agent Rod Williams (Lil Rel Howery), so when he disappears for two days and can’t be reached, Rod goes into detective mode. Unfortunately, his concerns are laughed at by Detective Latoya (Erika Alexander). This in itself is a reflection of how black issues can be overlooked by authorities, even black ones,

The performances are well-mannered and downright creepy at times with high marks to Kaluuya and Williams, who get the most to do with their characters. Peele makes us uncomfortable with the very normalcy of the race relations along with the class structure on display. He doesn’t get showy…until that final third.

We then have the usual assortment of over-the-top blood and mess, predictable thrills, and an anticipated climax. What’s interesting about the film’s end comes with the Special Features which offers up a vastly differently final scene that changes the tone and the optional commentary from Peele explains his choices. While I’m reviewing this as a straight thriller, others have viewed it as a satire but it doesn’t entirely work on that level given the horror undercurrents driving the characters and issues of race.

The film is out now from Universal Home Entertainment in a variety of packages including the Blu-ray, DVD< Digital HD Combo Pack. The high definition transfer is crisp, clear, and colorful with an excellent audio track,

Along with the alternate ending, there are a score of deleted scenes including seven different versions of the actual end scene, showcasing Howery’s adlib skills. A few of the other scenes would have helped the film and again, these come with optional Peele thoughts. There is the far more perfunctory Unveiling the Horror of Get Out: Behind the Scenes and an engaging Q&A Discussion with Peele & Cast, hosted by Chance the Rapper. Finally, there’s an okay Feature Commentary from Peele.