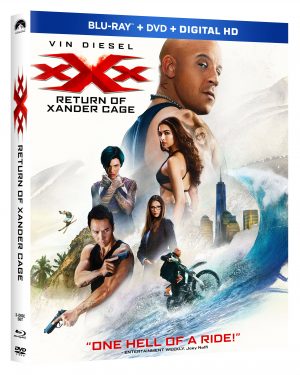 The basic gimmick is that there is now a device that can override satellite programming and turn them into weapons, bringing them crashing down on targets. Nicknamed Pandora’s Box, it is in the possession of the CIA until they are betrayed, allowing a tactical to invade and steal it. When a satellite is brought down on NSA Agent Augustus Gibbons (Samuel Jackson), it triggers a mad scramble to obtain the device.  The CIA’s Jane Marke (Toni Collette) tracks down Cage and convinces him to find the box in Gibbons’ memory.

From there, it’s a dizzying collection of set pieces as various factions clash in pursuit of the box which takes them around to tropical locales allowing Diesel’s muscles to glisten and women to wear very little, including rival Serena Unger (Deepika Padukone). The story’s conceit is that nothing is as it seems and betrayals and reversals come quickly until the various factions band together to destroy the device before it can be used again.

The set pieces are fast and usually imaginative, although the editing shreds many excellent moments, a disservice notably to Donnie Yen and Tony Jaa. DJ Caruso’s direction is frenetic but does little to enhance the storytelling.

There are the Schwarzenegger-like quips, notably “I love this shit” as Cage reaches the film’s climax. But beyond that, the dialogue is flat and unrevealing about the characters which wastes some good actors, especially Collette. Joining the team as their geeky tech expert is Felicity Smoak, I mean, Rebecca “Becky” Clearidge (Nina Dobrev), who at least gets some good moments. Jackson appears early on and is on the joke that Gibbons and Nick Fury are almost identical (which gives the film its best inside joke in the opening scenes).

Overall, it’s a lot of noise and action and very little to hang it on which is disappointing and could explain why the $85 million production earned about half that domestically, a major disappointment. Even its worldwide gross of about $350 million makes a fourth installment questionable.

The film, out now from Paramount Home Entertainment, has a superb 2.39:1 high definition transfer coupled with a Dolby TrueHD 7.1 audio track that lets you hear every shell casing hit the ground. It has been released in multiple packages including the Blu-ray, DVD, Digital HD combo and 4k UHD.

The Blu-ray comes with a handful of special features that focus on the cast and crew including Third Time’s the Charm: Xander Returns, Rebels, Tyrants & Ghosts: The Cast, Opening Pandora’s Box: On Location, I Live for This Sh#t!: Stunts, and a great Gag Reel.