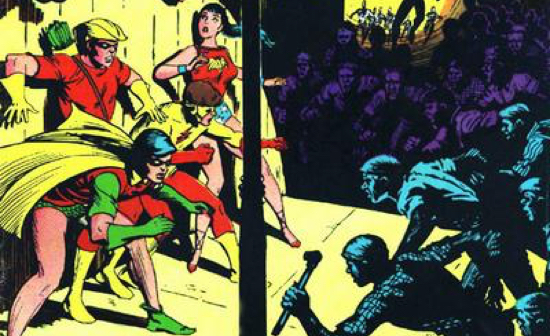 Holmes and Watson. Lone Ranger and Tonto. Batman and Robin. Lucy and Ethel. Hamlet and Laertes. The list of heroes and their BFFs is long and overall an honorable one… and usually necessary.

A sidekick, at base, is a supporting character and a supporting character’s main function is to bring out aspects of the protagonist. In most cases, the sidekick is there so that the protagonist isn’t constantly monologuing. Granted, Hamlet is a champion monologuist but when Laertes is there he can be engaged in a dialogue. Holmes needs Watson so the reader can see how brilliant the Great Detective is. Whatever his other character traits may be, Watson’s prime one is to be surprised and amazed by Holmes and, in that, Watson represents us, the readers.

There are many different ways of interpreting a sidekick. Watson, for example, can be Nigel Bruce’s bumbling Colonel Blimp character or Jude Law’s testy and acerbic put-upon friend or Martin Freeman’s occasionally explosive but loyal best man. In the Harry Potter films, Ron Weasley, in the first film, is at one point both brave and self-sacrificing. In later films, however, he becomes cowardly and mostly comic relief, very like Nigel’s Bruce’s Watson.

Robin falls into a strange category of the child or teen sidekick. He was originally introduced to lighten up the Dark Knight Detective and, again, to give Batman someone to talk to rather than himself. Robin humanized the Bat. His popularity gave rise to a whole slew of child/teen associates such as Wonder Girl, Kid Flash, Speedy, and Aqualad. Later, these five went from supporting characters to central ones when they formed their own super-team, the Teen Titans (later, just the Titans when they all outgrew their teenage years).

The original Robin, Dick Grayson, later grew out of his shorts and tights to become a full-fledged hero of his own, first as Nightwing and then later, briefly, actually taking Bruce Wayne’s place as Batman before reverting back to Nightwing. There have been other Robins since then, including one – Jason Todd – who was killed by the Joker. Don’t worry; he got better. The role is currently being filled by Bruce’s son, Damian. I believe he died as well at one point but is also now feeling better.

Moral and ethical questions have been raised about the whole idea of the adult hero having child/teen sidekicks. The lifestyle, after all, is inherently violent and rather dangerous. Frederic Wertham, in his suspect 1954 treatise Seduction of the Innocent, postulated Batman and Robin were gay which, given those times, was thought to be profoundly deviant. Wertham was blowing it out his ass but the damage was done at the time. Still, one can see that it was a dangerous life style to include the kids in. The questions remain.

For me, I’ve sometimes identified more with the sidekick than the protagonist. I love Holmes but I’ve always identified more with Watson (except for Nigel Bruce). Batman (and Bruce Wayne) is difficult to like but Dick Grayson (especially in his adult incarnations) is someone with whom I can more easily relate. I think sidekicks are designed that way. They put more human into super-human.